It is 711 kilometres from Cochranes Road, Moorabbin, to the Goulburn Correctional Complex in NSW, and it has taken nearly a quarter of a century for the witness in the prison green jacket to give evidence in a case where the justice system itself is on trial.

Court Three of the Melbourne Supreme Court is 100 steps through the courtyard, past the domed law library from Court 12, where 20 years ago Bandali Debs and Jason Roberts sat together in silent solidarity during their first trial and were found guilty of the murders of Sergeant Gary Silk and Senior Constable Rod Miller.

Debs was sentenced to life with no minimum.

In the 20 years since the first trial, nothing much has changed physically in the Supreme Court. The jury still sit in two lines to the right of the judge, who occupies a high-backed black swivel chair while lawyers leaf through mountains of transcripts.

But there is one big difference. Back then Debs pleaded not guilty and chose to remain silent. This time he is testifying for the prosecution and Roberts is facing the jury alone.

These days Debs doesn’t look like a brooding killer, convicted of four murders, who organised a series of armed robberies in Melbourne suburbs and opened fire on police when pulled up in Cochranes Road, near the Silky Emperor Restaurant, just after midnight on August 16, 1998.

Giving remote evidence from the Goulburn Prison, he speaks clearly and without emotion about the night Silk and Miller were shot dead.

If you sat next to him at a bus stop you wouldn’t give him a second glance, as there is nothing in the demeanour of the 68-year-old that betrays the darkness within.

He is quietly asked a series of questions by Prosecutor Ben Ihle, QC, in Court Three. He answers, only pausing to ask if he is covered by “Section 128” (immunity from self-incrimination). When told he is, Debs tells how he and his fellow armed robber, Jason Roberts, pulled 10 armed robberies, where he hid his guns, how he disposed of them and how they picked their targets.

Now the once tight armed robbery team of Debs are split, with the master and apprentice giving opposite versions of events. This is not a matter of a variation in recollections. Debs says they were both there, while Roberts says Debs was alone. One is lying.

Roberts won a retrial and says while he was Debs’ partner in the 10 armed robberies, he was not with him in Cochranes Road. Debs says Roberts was in the passenger seat when they were pulled up by police. He tells the court he shot Miller and Roberts shot Silk. 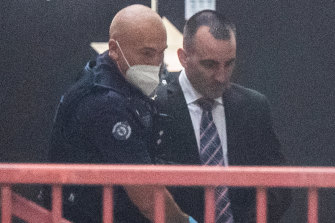 Jason Roberts leaves the Supreme Court on the first day of his murder trial. Roberts, 41, has pleaded not guilty to two charges of murder over the deaths of Sergeant Gary Silk and Senior Constable Rodney Miller in August 1998.Credit:Jason South

The reason for the retrial is that having served 20 years of his original sentence, the Court of Appeal set aside Roberts’ conviction.

Lead defence lawyer David Hallowes, SC, tells the new trial that “some of the police in the investigation had engaged in misconduct”. He describes the prosecution’s decision to call Debs “an act of desperation”.

This trial has heard from the first police who arrived at Cochranes Road after the shooting. Gary Silk was dead, his gun still in his holster. Rod Miller was missing, having crawled away with fatal injuries.

One of the first there was Cheltenham Constable Brad Gardner, who was on a routine 6pm to 2am patrol. He tells of Miller “thrashing about”, trying to get onto his left side.

Gardner, the most junior police officer there having only graduated the year before, held Miller’s hand and cradled his head, trying to keep him still.

“As strange as it might sound, I felt he was going to hurt himself by the way he was thrashing around … not knowing the severity of his injuries.”

Gardner took notes at the time, which include what Miller allegedly said when asked for descriptions.

Ihle asks: “And what was his response?”

Ihle: “What did you do with that information?”

Gardner: “I wrote it into my notebook.”

Gardner hopped in the ambulance to write down anything Miller said. He followed him all the way to the Monash Hospital operating theatre and waited outside until he was told Miller was dead.

Gardner has left policing and is now a truck driver.

For a case that has been in the headlines for more than 20 years, the public gallery is surprisingly quiet. The few onlookers include relatives of Silk and Miller who have carried themselves with dignity through trials, inquiries and retrials. They remain determined to allow justice to take its course.

Below is the jury of eight women and six men, wearing masks. They have iPads to look at exhibits, even though they are still beamed onto the wall. They have headsets to listen to scratchy listening device and telephone intercept tapes secretly recorded 22 years ago.

They have pens and foolscap-size notebooks. One juror writes prodigious notes in a small neat blue hand. He fills a page around every 45 minutes. Anyone who thinks juries don’t take their roles seriously should visit the Supreme Court.

Justice Stephen Kaye sits at the bench taking detailed notes in a bound book. He will refer to them before writing his final address.

He talks quietly and calmly, interjecting occasionally with dry wit. He clarifies questions if a witness heads off track. No one doubts this is his court.

Hallowes occasionally takes to his feet to object or seek clarification. Ihle yields the floor with respect. Both are understated and meticulously prepared. This is not the place for TV courtroom- style theatrics.

Debs’ hair is now silver-grey and he looks fit, as if prison life agrees with him. He wears steel-rimmed glasses he often leaves perched on the end of his nose. A man who worked as a tiler, he often uses his hands to express himself when questioned.

Debs is sworn in and led through his story. If he digresses he is told to stick to the questions.

Ihle asks: “Were you involved in those armed robberies?”

Ihle: “And with whom did you commit those armed robberies?”

He says he was driving when they were pulled over by Silk and Miller in Cochranes Road, that he was questioned by Miller while Silk dealt with Roberts.

Sometimes, when asked for details, Debs brushes his right hand along his top lip. “Not after 20 years, I wouldn’t remember that,” he replies.

The holes in his memory are not unusual. Witness after witness struggles to recall details of the fatal ambush that took minutes to explode, two years to investigate and another 22 years to reach Court Three.

Debs is played police tapes of his conversations. He says he remembers parts while others remain blank.

He is asked who he means when he refers to “we” being pulled over in Cochranes Road. He responds: “Jason Roberts and myself.”

While Debs goes in detail through his version of the events, his testimony is occasionally at odds with the scenario set out by the prosecution.

He says Miller was standing behind him shining a torch when he asked him to open the boot. Debs says he fired two shots through his cardigan, hitting the policeman: “Well, I had to have hit him, because he went flying back.”

Then, he says, Roberts shot Silk.

The Crown says Roberts shot Silk first and then Debs, still in the driver’s seat, shot Miller through the rear window of his daughter’s Hyundai hatchback.

The prosecution is given permission to cross-examine Debs, even though he is their witness.

Ihle says: “I suggest to you, Mr Debs, is the account you’ve given this jury from the point that Sergeant Silk took Jason Roberts over near the factory is an account where you have sought to minimise and distance yourself from particularly low and callous acts?”

The prosecutor says that after Roberts shot Silk, Debs fired two more shots into the policeman. Debs denies this.

He sticks by his version when told it doesn’t fit the forensic evidence: “I’ve told you exactly what happened and you’ve twisted the whole aspect of what I’ve said all around.”

Hallowes’ cross-examination centres on Debs’ criminal history, his motivation for testifying, and draws the witness to admit he lied under oath.

Debs, he suggests, became a witness not to tell the truth but in the hope of a reduced sentence and/or a return to a Victorian jail.

Hallowes: “You’re a violent person though, aren’t you, Mr Debs?”

Debs: “You could call me that.”

It is day 31 of the trial and we are yet to hear Roberts’ version.

The court is adjourned and we troop outside to speculate about the testimony. Was Debs an impressive witness? Was he believed?

In the end it is evidence, not opinions, that matter. And that will be in the hands of the jury.

As it should be.