A 33-year-old man died after a fight over water in southern India, police said Friday, as the country gasped from extreme heat and storms that killed 24 in the north.

The argument broke out on Wednesday when a 48-year-old man and his three sons were allegedly siphoning large quantities of water from a public tank near Thanjavur in Tamil Nadu state.

A local man, named as D. Anand Babu, confronted them and violence broke out, police said. Babu was taken to hospital and died the next day. His father was also injured in the altercation. 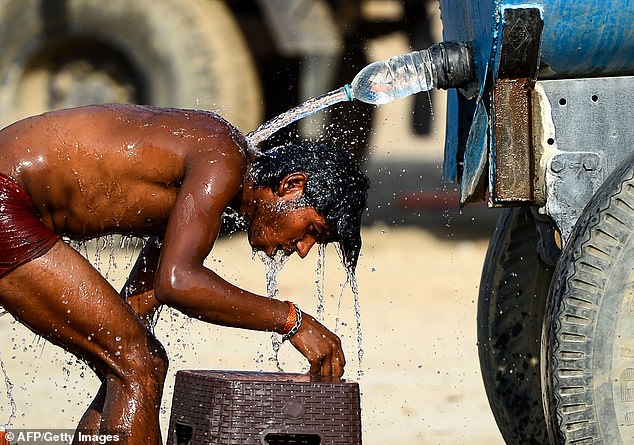 D. Anand Babu, 33, was beaten to death as he went with his father to confront a 48-year-old man and his three sons who were siphoning water from a public tank (file image)

Vast swathes of India have been sweltering a heatwave in recent days with temperatures nearing 50 degrees Celsius (122 Fahrenheit) in northern states like Rajasthan and Uttar Pradesh.

Large areas have also been hit by drought, leaving millions dependent on water trucks and adding to the misery of farmers in states such as Tamil Nadu, Maharashtra and Karnataka.

The problems have been exacerbated by the late arrival of monsoon rains, although they were due to make landfall in southwestern India within 24 hours, forecasters said Friday. 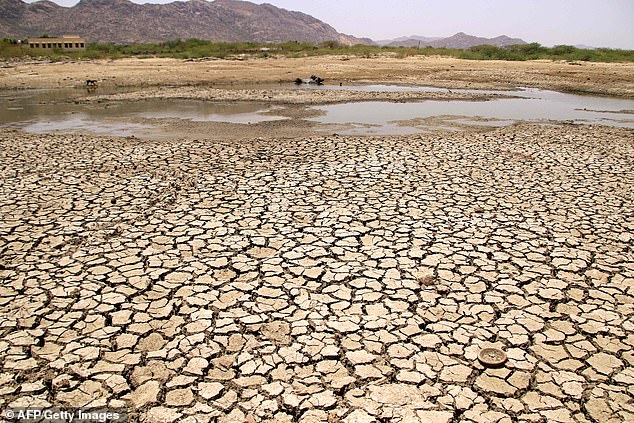 India has been struck by widespread drought after a severe heatwave in the north saw temperatures top 50C (pictured, a dried-out lake in Ajmer, northern India)

At least 24 people were killed in the northern state of Uttar Pradesh on Thursday overnight as raging winds flattened homes, trees and electricity poles.

State disaster officials told AFP that 56 people were injured in the freak dust storms that swept large parts of the state.

The weather office predicted winds ranging between 50 and 70 kilometres per hour (30 and 50 mph) would hit parts of the state over the next two days.

Last year a similar dust storm left a trail of destruction across the northern state, killing at least 150 people.