London: The British Government has ordered an inquiry into how a serving police officer was able to use his position to kidnap, rape and murder British woman Sarah Everard.

Refusing to name Everard’s killer, Home Secretary Priti Patel told the Tory Party conference in Manchester that the police officer, who will never be released from jail for his crimes, was a monster. 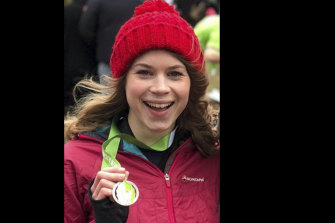 A police officer abducted Sarah Everard, pictured, as she walked home from a friend’s place in South London.Credit:Metropolitan Police

“It is abhorrent that a serving police officer was able to abuse his position of power, authority and trust to commit such a horrific crime.

“The public have a right to know what systematic failures enabled his continued employment as a police officer.

“We need answers as to why this was allowed to happen.

“There will be an inquiry, to give the independent oversight needed to ensure something like this can never happen again.“

Prime Minister Boris Johnson had previously refused calls for an independent inquiry. He is also resisting pleas to make misogyny a crime, saying existing offences against women need to be prosecuted better amid government complaints that rape convictions are “disgracefully” low.

The police officer, Wayne Couzens, used his warrant card to arrest 33-year-old Everard during the height of lockdown in March when she was walking home after dinner at her friend’s place in South London.

A witness saw her being falsely arrested and handcuffed. Everard was never seen alive again, and the burnt remains of her body were found in woodland in Kent more than a week later.

Her murder rocked Britain, triggered heightened focus on violence against women and has shaken confidence in the police. Couzens was reported for flashing 72 hours before he murdered Everard, but Kent police did not investigate the report far enough to realise that he was a serving police officer.

The Metropolitan Police Force and its Commissioner Cressida Dick have also come under pressure because of the forceful tactics used against women who attended a vigil at Clapham Common, near where Everard went missing and before her body was found.

The Labour opposition has been calling for an independent inquiry and for Dick to resign.

Cooper said she understood that the inquiry would “look both at how this dangerous man was able to serve as a police officer, and into wider issues & culture within policing, as we have called for”.