CNBC reporter Dan Murphy explained: “The UN atomic watchdog has really called out Iran on its nuclear enrichment programme. What we’ve now learnt in a new briefing from the agency is that Iran has been accelerating its nuclear enrichment programme. But the agency stopped short of calling out exactly that rate of acceleration and it also wasn’t able to provide information on whether or not Iran has reached limit-up on its stockpiles as declared under the 2015 deal.”

International Atomic Energy Agency (IAEA) chief Yukiya Amano stressed that he was worried about the current heightened tensions with Iran and pushed for a dialogue.

Iran announced last month that it would suspend some of its own commitments in the 2015 deal in response to hard sanctions that were reinstated by the US.

Iranian Foreign Minister Mohammad Javad Zarif later said reducing tensions was only possible by stopping what he called the “economic war by America”.

He ominously told a news conference in Tehran: “Those who wage such wars cannot expect to remain safe.” 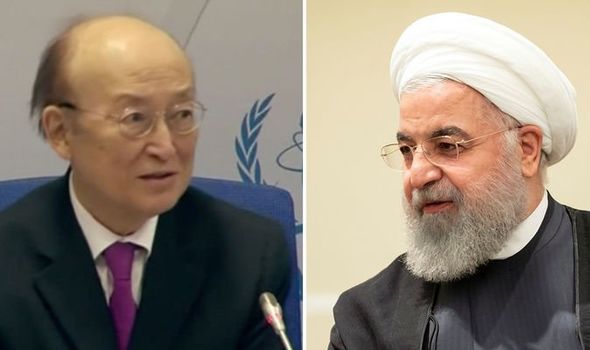 German foreign minister Heiko Maas declared that the situation in the region was “”highly explosive and extremely serious” amid fears of a military confrontation between the US and Iran.

The escalation began when President Trump dramatically pulled out of the nuclear deal last year and reinstated sanctions.

Then last month, he ended exemptions from US secondary sanctions for countries that continued buying oil from Iran.

This decision was intended to bring Iranian oil exports to zero, denying their government its main source of revenue.

The US even sent an aircraft carrier and a string of B-52 bombers to the Gulf and blamed attacks on four oil tankers off the coast of the UAE on Iran.

In response , the Atomic Energy Organization of Iran announced that it would quadruple its production of low-enriched uranium.

In Washington, State Department spokeswoman Morgan Ortagus said the IAEA findings showed “that Iran is going in the wrong direction and it underscores the continuing challenge Iran poses to international peace and security.”

They have promised to help Iran find other ways to trade, although with no success so far. All major European companies that had announced plans to invest in Iran have since called them off for fear of U.S. punishment.

Iran says the Europeans have not done enough to provide it with alternative ways to trade.

President Rouhani emphasised: “We have not seen any serious measures taken by the Europeans in the past year despite their fairly good political stance.”