A year later, Iraqi police arrested the shooter in the killing of a prominent public commentator whose slaying sent shockwaves through the country, officials said Friday. Iraq’s prime minister declared that with the arrest, his government has fulfilled its promise to bring the perpetrators to justice.

Hisham al-Hashimi was gunned down last July outside his home in Baghdad in a drive-by shooting that involved two attackers on a motorcycle. He was a well-connected security analyst who appeared regularly on Iraqi television and whose expertise was sought out by government officials, journalists and researchers.

The killing of the 47-year-old al-Hashimi — whose shooting was captured on a surveillance camera — contributed to a prevailing atmosphere of intimidation and fear among activists in Iraq and highlighted the government’s struggle to bring armed groups into line. 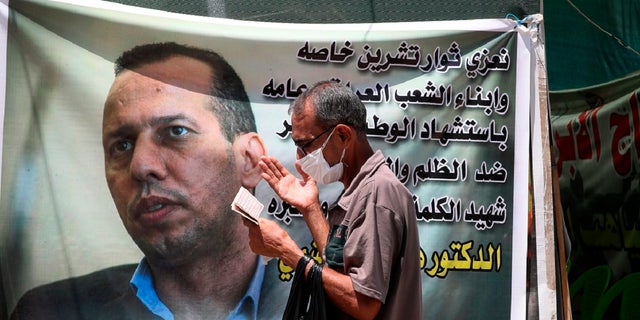 In this July 12, 2020 file photo, a protester prays by a poster showing Hisham al-Hashimi an Iraqi analyst who was a leading expert on the Islamic State and other armed groups who was shot dead in Baghdad. (AP Photo/Khalid Mohammed)

Two security officials told The Associated Press that one of the men on the motorcycle, the shooter, was arrested two weeks ago and confessed to the crime before an investigative judge. The man was connected to a militia group, they said, but did not name which one.

The officials spoke on condition of anonymity because they were not authorized to talk to reporters.

Iraqi Prime Minister Mustafa al-Kadhimi tweeted the development: “We promised to arrest the killers of Hisham al-Hashimi. We fulfilled the promise.”

Later Friday, state Iraqiya TV station broadcast footage of the alleged suspect, showing him confessing to his purported crime. The man identifies himself in the video as Ahmed Hamdawi Al-Kinani, a police officer with the rank of first lieutenant in the Interior Ministry.

It is not unusual that officers and officials in Iraq have connections to militias working without or with the state’s endorsement. The government has struggled to reign them in, partly because they are so entrenched within the state structure.

Security forces are still looking for at least six other individuals connected to the shooting, some of them believed to be abroad, the two officials told the AP. In his confession, al-Kinani said he had worked with four other accomplices.

Killings of activists are pervasive in Iraq, with many blaming Iran-backed militias. Al-Hashimi, who had worked on a report about Iran-backed groups within Iraq’s establishment before he was killed, had reportedly received threats from such groups.