Minneapolis: The city of Minneapolis on Friday agreed to pay $US27 million ($34 million) to settle a civil lawsuit from George Floyd’s family over the black man’s death in police custody on May 25 last year , as jury selection continued in a former officer’s murder trial.

Council members met privately to discuss the settlement, then returned to public session for a unanimous vote in support of the massive payout. It surpassed the $US20 million ($25 million) the city approved two years ago to the family of Australian woman Justine Damond Ruszczyk, who was shot and killed by a police officer responding to her 911 call in July 2017.

Floyd family lawyer Ben Crump called it the largest pre-trial settlement ever for a civil rights claim, and thanked city leaders for “showing you care about George Floyd”. 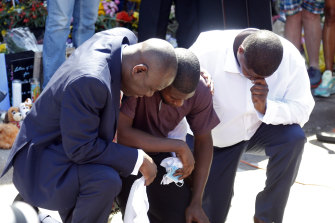 Quincy Mason, centre, the son of George Floyd, and family lawyer Ben Crump, left, kneel, as they visited the memorial on the site where Floyd was arrested and then died in police custody. Credit:AP

George Floyd’s sister Bridgett Floyd, who attended jury selection earlier this week for former Minneapolis police officer Derek Chauvin, said in a statement she was glad the lawsuit was resolved.

“Our family suffered an irreplaceable loss May 25 when George’s life was senselessly taken by a Minneapolis police officer. While we will never get our beloved George back, we will continue to work tirelessly to make this world a better, and safer, place for all,” she said. 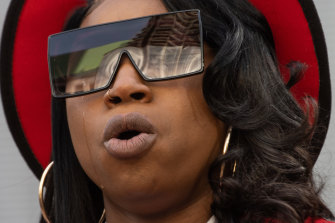 The settlement includes $500,000 for the south Minneapolis neighborhood that includes the 38th and Chicago intersection that has been blocked by barricades since his death, with a massive metal sculpture and murals in his honor. The city didn’t immediately say how that money would be spent.

Floyd was declared dead on May 25 after Chauvin, who is white, pressed his knee against his neck for about nine minutes. Floyd’s death sparked sometimes violent protests in Minneapolis and beyond and led to a national reckoning on racial justice.

“I hope that today will centre the voices of the family and anything that they would like to share,” Council President Lisa Bender said. “But I do want to, on behalf of the entire City Council, offer my deepest condolences to the family of George Floyd, his friends and all of our community who are mourning his loss.”

Floyd’s family filed the federal civil rights lawsuit in July against the city, Chauvin and three other fired officers charged in his death. It alleged the officers violated Floyd’s rights when they restrained him, and that the city allowed a culture of excessive force, racism and impunity to flourish in its police force.

In 2019, Minneapolis agreed to pay $20 million to the family of Australian woman Justine Ruszczyk Damond, an unarmed woman who was shot by an officer after she called 911 to report hearing a possible crime happening behind her home, to settle her family’s civil rights lawsuit. Damond was white.

It wasn’t immediately clear how the settlement might affect the trial or the jury now being seated to hear it. Joseph Daly, a professor emeritus at Mitchell Hamline School of Law, said it will be hard to stop jurors or potential jurors from hearing about it.

“Judge Cahill will likely explain to the jurors that each must make a decision based solely on the evidence they hear in the criminal trial,” Daly said.