Cairo: Libya's east-based army claims its troops killed at least seven Islamic State militants, including foreign fighters, in a raid on their hideout in the country’s south.

The statement from the self-styled Libyan Arab Armed Forces said a six-hour firefight with the militants took place in a neighbourhood of the city of Sabha, 650 kilometres south of the capital, Tripoli into the early hours of Tuesday. 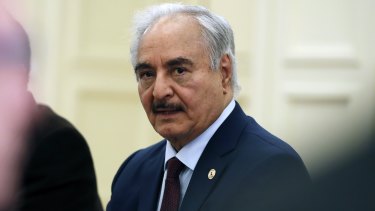 The force, led by commander Khalifa Hifter, said the dead included three militants from Saudi Arabia, an Australian, an Egyptian and two Libyans. Hifter's troops shared graphic photos of the dead, along with their alleged passports to show their identities.

A spokesperson for the Department of Home Affairs the dead did not include an Australian citizen.

"The Australian Government is aware of reporting that a man carrying an Australian proof of age card was killed as part of an anti-crime operation in Libya," a spokesperson said.

"The man is not an Australian citizen."

Earlier, Australian government sources had said the person killed was a former resident.

The troops also detained two women, a Libyan and an Egyptian, in the raid. A pro-Hifter news website, al-Marsad, reported three of Hifter's forces were also killed.

Libya is divided between two rival administrations, based in the country's east and west, with an array of fighters and militias, backed by various foreign powers allied with each side.

In the years after the 2011 uprising that toppled longtime autocrat Moammar Gadhafi, IS and other extremists had managed to gain a foothold in the country, benefiting from Libya’s remote stretches near the borders with Egypt, Sudan, Chad, Algeria, Niger and Tunisia.

Hifter, who was instrumental in pushing back IS and who is aligned with the east-based administration, attempted a power grab last year, with a military offensive launched in April 2019 aimed at capturing Tripoli.

But the west-based Libyan forces and militias allied with the UN-supported government in Tripoli defeated that offensive with Turkey's military help and Hifter's campaign collapsed in June.

Fighting has died down in recent weeks amid intensive international efforts, including from the United States, to establish a lasting ceasefire and avert a showdown between the rival sides over the strategic city of Sirte, the gateway for vital oil facilities.