INTENSIVE care units in Bergamo are full as the Italian city continues to grapple with a third wave of Covid after the country snubbed the AstraZeneca vaccine.

Today marks the first anniversary of the day a convoy of army trucks rolled into the city to remove dozens of coffins accumulated in churches and chapels as they exceeded maximum capacity – a stark snapshot of the virus's untamed power. 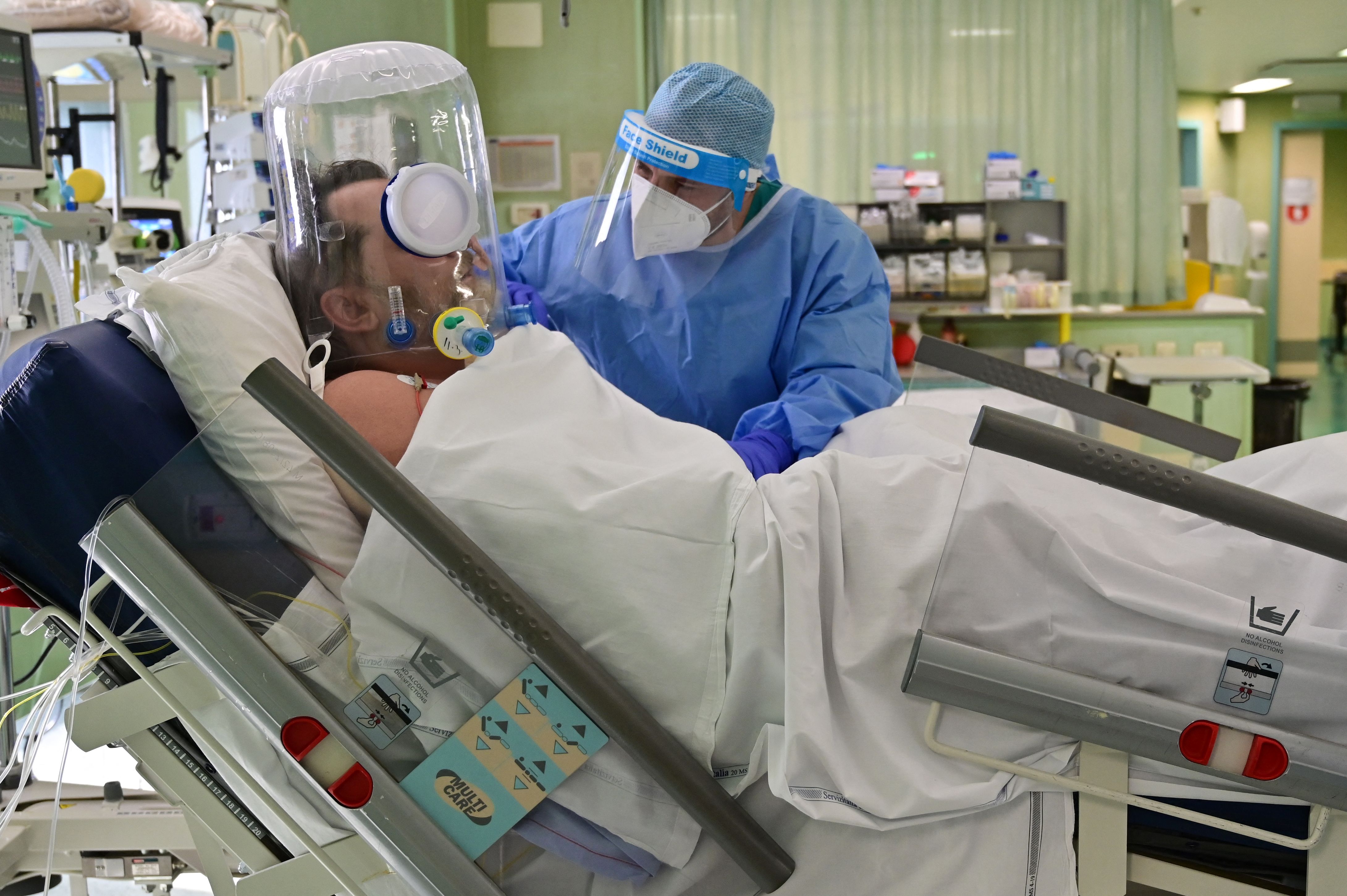 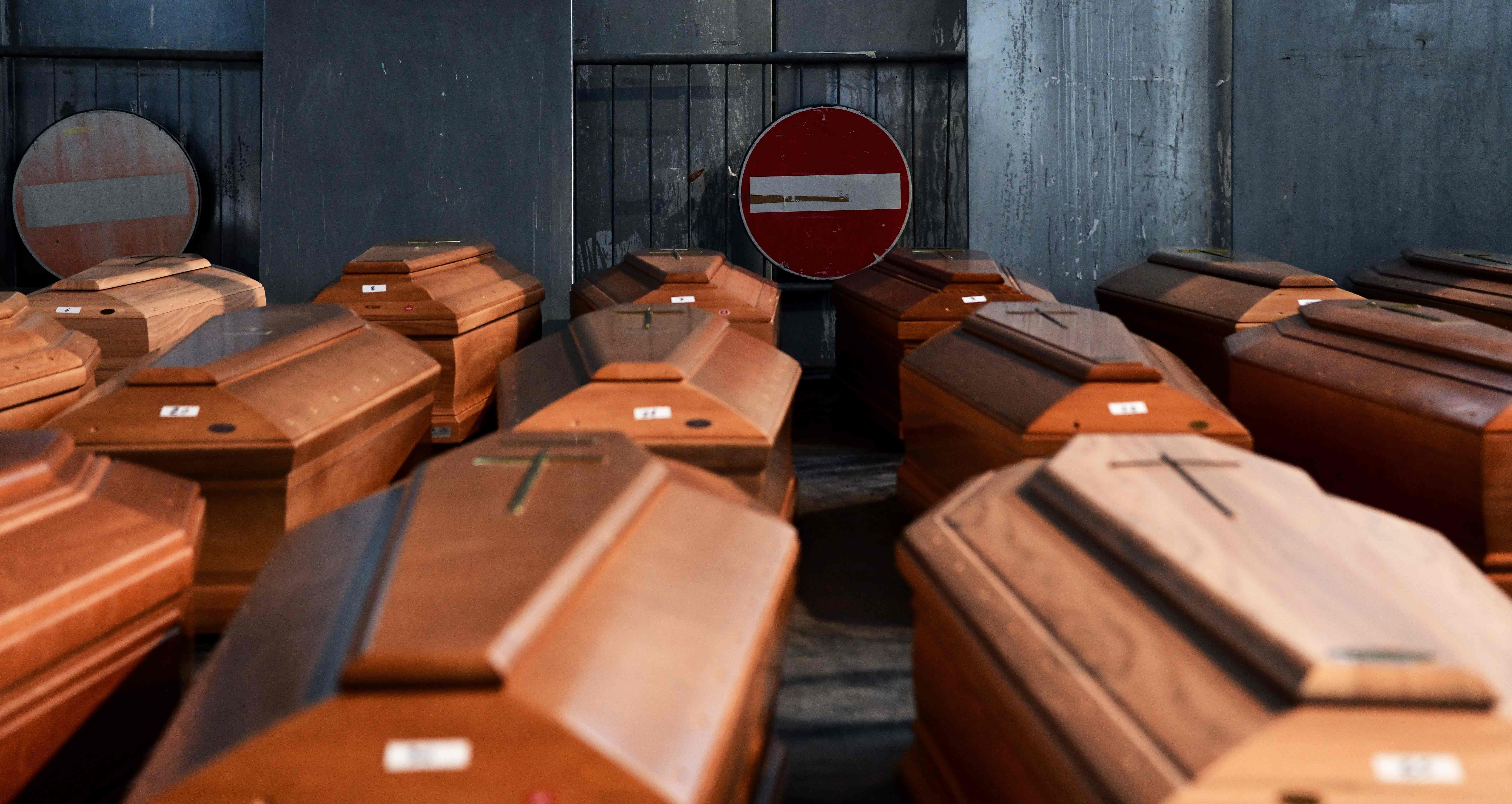 Now, 12 months on, the city is still ravaged by the deadly bug and is back in lockdown, with mayor Giorgio Gori saying it has left no one unscathed.

"There is not a single person in Bergamo who did not have to say goodbye to a loved one," he told Reuters.

Thousands of towns held a minute's silence today as Italy mourned its victims of the pandemic, with Prime Minister Mario Draghi leading tributes in Bergamo – an epicentre of disease's first destructive wave a year ago.

"The respect we owe to those who have left us must give us the strength to rebuild the world they dreamed of for their children and grandchildren," said Draghi, speaking in a "remembrance wood" being created as a living monument to the dead in a local park.

Images of the army convoy snaking its way through roads in Bergamo on March 18, 2020, after its death toll reached such heights that coffins had to be transported out because its cemeteries and crematoriums were full remains one of the most heart-wrenching images of the pandemic, in a year that saw many.

For Bergamo, though, the army convoy was early evidence of the outsized toll the first weeks of the outbreak had on what would become the hardest-hit province in the region of Lombardy.

By the end of March, the province of Bergamo had registered a 571 per cent increase in deaths, compared with the five-year monthly average the biggest increase in Italy and one of the biggest localised increases in mortality rate in Europe. 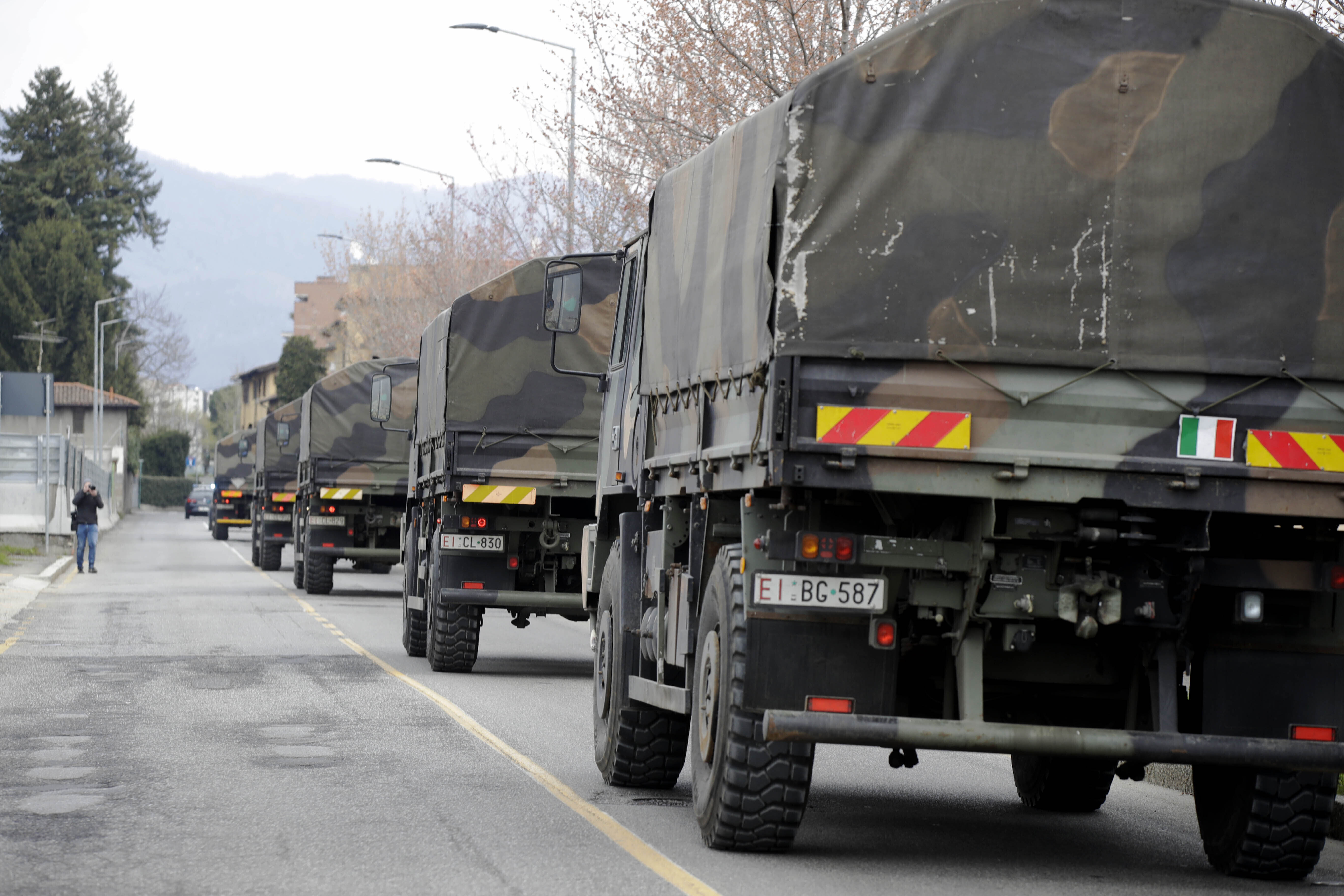 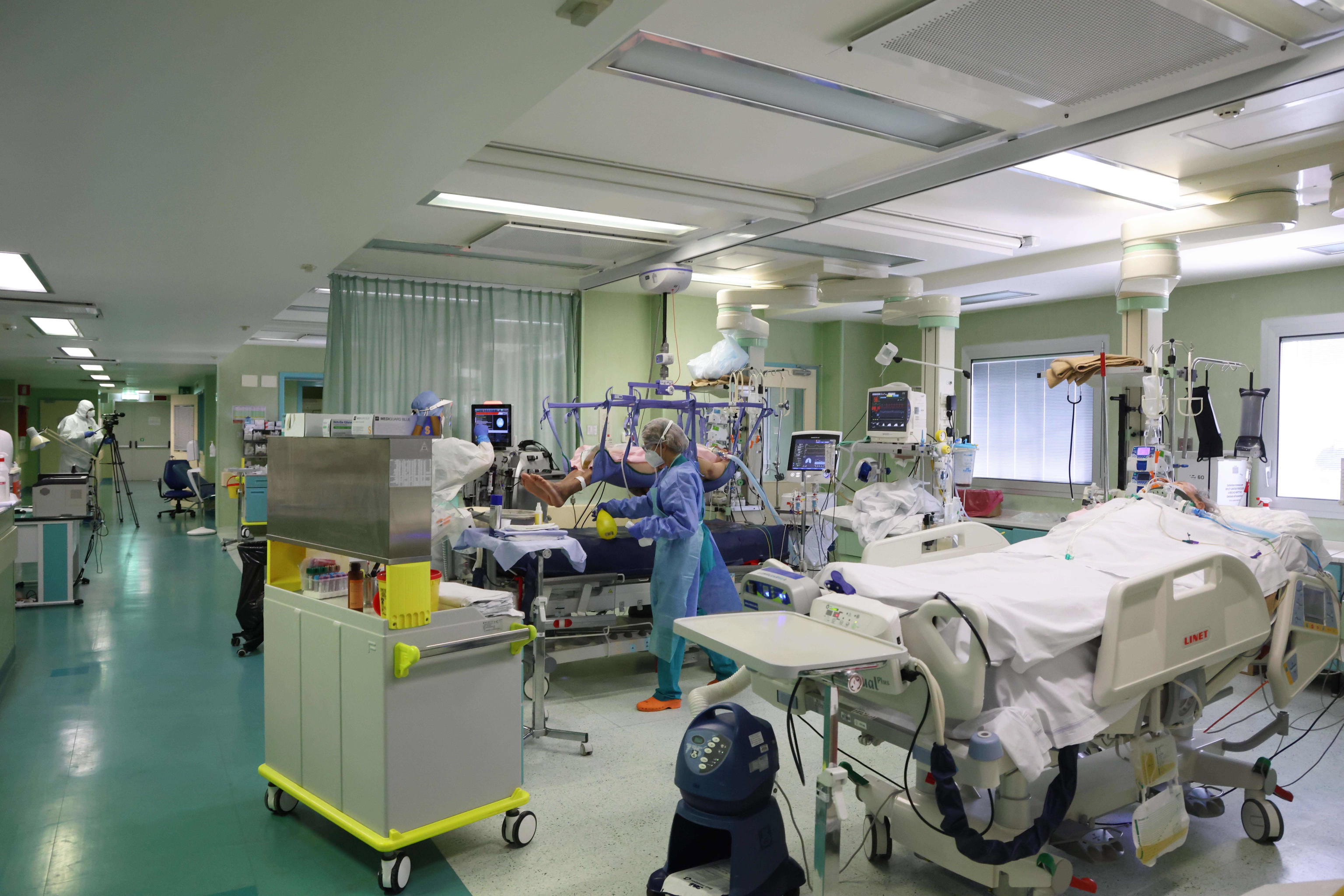 Italy has seen the seventh highest death toll in the world, with more than 100,000 deaths linked to Covid reported.

That includes 670 in Bergamo, and about 1,600 in the surrounding province.

Gori belives the real number in his city was much higher as only very few people were tested for the virus in the early days.

Like much of Italy, Bergamo is once again in lockdown to try to contain a third Covid wave that on Wednesday saw a record 324 people nationwide admitted to intensive care.

Anxious to end the health crisis, Draghi said Italy's ongoing vaccination campaign was a priority and promised that inoculations would carry on unhindered whatever decision the European Medicines Agency (EMA) took about the AstraZeneca shot.

Italy, like several European countries, suspended the use of the AstraZeneca vaccines over blood clots fears even though regulators say it is safe.

It comes after a heartbreaking image of a young restaurant owner with her head in her hands was adopted as a symbol of Italy's anger at another lockdown.

Camilla Moccia, 22, was forced to close her trattoria just outside Rome on Sunday night amid Italy's third wave of Covid. 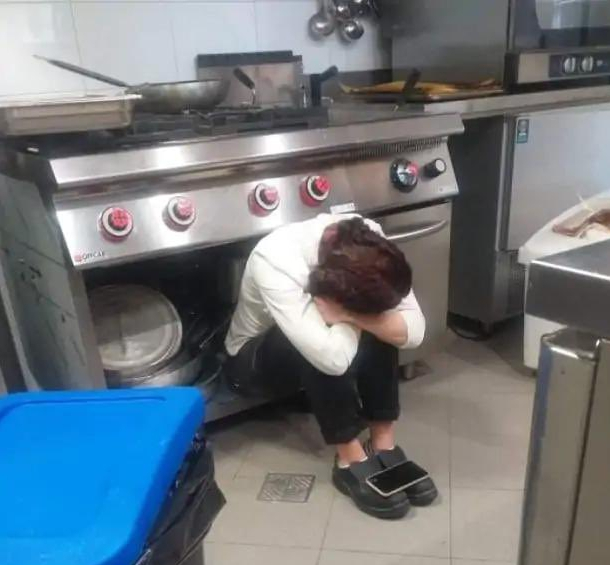 After being locked down over Christmas and New Year, restrictions in Italy were eased, allowing bars and restaurants in "yellow zones" to serve customers at tables and counters until 6pm.

But the arrival of the UK variant caused coronavirus cases to surge, leading to another harsh lockdown.

Two thirds of the country including Milan and Rome were told to stay at home from Monday until at least Easter, forcing restaurant and bar owners to close down again on Sunday.

The picture of Camilla, taken by her mum, went viral in minutes and appeared on many front pages in Italy yesterday.

Ms Moccia said her restaurant, Bistrot della Pasticciona, was becoming a success before it was shut by the first lockdown last year.

She added: "This is an unsustainable situation and it's been going on for a year now."

The latest lockdown is expected to hit the Italian economy hard, with cafes restaurants and hotels expected to lose €5 billion between now and Christmas.

Italy was one of the worst-hit countries during the first wave of the pandemic and has Europe’s second highest death toll from Covid-19, behind Britain.

But with new cases and deaths falling in the new year, there was optimism of restarting the Italian economy.

As well as bars and restaurants, tourist attractions such as the Colosseum and the Vatican were reopened for visitors.

But with new cases back up above 21,000 and more than 500 daily deaths, two-thirds of the country has been forced into the highest tier of lockdown.

Their decision to stop the use of the AstraZeneca vaccine could also be making the situation worse.

Before suspending the use of the AstraZeneca jab, Italy was struggling to vaccinate its population.

Only 6.7million doses have been administered so far, in a country of more than 60 million people.

The country’s Prime Minister has warned Italy faces a similar situation to this time last year when it was Europe’s Covid epicentre.

“More than a year after the start of the health emergency, we are unfortunately facing a new wave of infections,” said Prime Minister Mario Draghi.

“The memory of what happened last spring is vivid, and we will do everything to prevent it from happening again.”