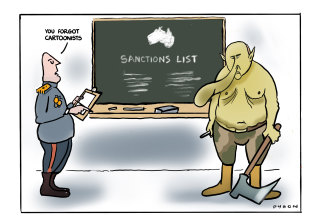 It’s time for masks and a major education campaign

The practice of medicine, alongside good public health issues, is all about deferring deaths. I agree with epidemiologist Professor Margaret Hellard, of the Burnet Institute (The Age, 17/6), that wearing masks would save lives and reduce the burden on the health system, of airborne infectious disease including COVID-19 and flu, in terms of serious illness.

This would reduce the effects on the economy of absenteeism from work, both in paid and caring roles. Let us also acknowledge that premature or unnecessary death causes immeasurable grief, and the preservation of life is a human instinct.

A mask mandate should be reintroduced for retail, theatres, cinemas and galleries, while retaining their use on public transport. Diners in hospitality settings who are willing to risk infection would have the freedom to eat and drink, mask-free.

At the very least, let’s have a substantial public education campaign promoting the steps we can take to defer premature death for ourselves and others – wearing masks in public indoor settings, getting vaccinated (including third and fourth doses), and improving ventilation in indoor settings.
Dr Lorraine Baker, Balwyn

Our responsibility to reduce our disease burden

Modelling by the Burnet Institute has found that hundreds of lives could be saved and tens of thousands of COVID-19 infections avoided if more people wore masks indoors and took other measures to reduce the spread of the virus.

It would also be interesting to see modelling of the impact of reducing obesity, diabetes and cardiovascular diseases on the number of COVID-19 deaths and hospital admissions.

We have been repeatedly told that certain health conditions are over-represented in adverse outcomes with COVID-19. Maybe those of us who could manage to lose weight and reduce our disease burden should do so, and maybe we will also prevent a few hundred deaths. At the very least, if more of us managed to do this,then the health system might have a better chance of helping others who are in real need.
Joanna Wriedt, Eaglemont

Long-term impact of GPs not seeing some patients

Pre-COVID, general practitioners used to examine patients with the flu or other viruses. However, many have adopted the practice of not seeing patients with COVID-like symptoms.

In my experience, it is almost impossible to get a face-to-face appointment with a GP if you have a fever. This practice is pushing people to use telehealth, call an ambulance or visit hospital emergency departments.

Also, fevers can be a result of other infections besides COVID-19. Telephone appointments will not help someone who might have bronchitis or pneumonia.

I suspect this practice is leading to patients not being treated properly, and overall worse health outcomes. It is also increasing pressure on ambulance ramping, overworked medical professionals and hospital emergency departments.
Mary Howe, Bentleigh

After decades of negligence by Coalition governments (state and federal), taxpayers will now have to rescue a privatised industry which has failed to transition supply to a renewable, non-carbon source. Three-word slogans have failed.

I fear that the mammoth task to upgrade the grid, and finance and build some three times the solar, wind, hydro and storage that we already have, in the next decade will be beyond the capability of government and industry.

Under current strategies, I believe that blackouts and power rationing are inevitable before these investments are able to replace the ageing, fossil-fuelled power plants supplying some 60per cent of electricity power demand.
Robert Hutchings, retired SEC senior manager, Kew

Some readers have expressed concern about lights left on in commercial buildings as an obvious source of energy waste (Letters, 17/6).

The cumulative effect is not insubstantial, but for real savings we must look to the almost universal practice of setting the temperature beyond what heating and cooling systems can possibly reach.

So instead of cycling in and out of maximum power, the machine draws down full power constantly. With demand driving a lot of the current problems, a public education campaign on this issue is essential.
Pat Hockey, Clunes

The current power crisis is not caused by renewables. It is caused by the cost of coal used in the baseline, coal-fired generators. That coal needs to be bought on the free market and the price is controlled by the overseas buyers.

The Coalition government was adamant that Australia needed to keep the thermal, coal- fired power stations to provide this baseload power.

Electricity being generated by wind farms and solar still costs the same. If, like Britain, Australia had large, offshore wind farms, then this would keep the wholesale power costs down as, once built, the “fuel” is free.
Laurens Meyer, Richmond

None of the big energy companies are “gaming the system”. They are just practising the tenets of capitalism where a country’s trade and industry are controlled by private owners for profit for the benefit of their shareholders.

Just what was one to expect when the nation’s assets were sold off to foreign-controlled companies which are in the business of maximising profits by minimising costs, expenses and taxes? These companies could be selling cabbages instead of energy but their modus operandi would be exactly the same.
Cushla McNamara, Hawthorn

Ban me too, Vladimir

So Russia has a “little list”, banning certain people from entering it (The Age, 17/6).

Regretfully I am applying to be on it. I am glad to have visited this fascinating country, in all its variety and contradictions, in the past but would happily join a group of fellow Australians I respect in forfeiting the right to do so in the foreseeable future.
Vivienne Player, Beaumaris

Re Victoria’s crime rate (The Age, 17/6). While family violence incidents may have decreased 2.4per cent over the year to March, 90,794 incidents is 90,794 too many.
Niko Melaluka, Footscray

Not all ‘experts’ are right

Like Jennifer Nicholls (Letters, 15/6), I too was counselled about my career options 65years ago. This was my fifth school (an all-girls school), I came from a working-class family, and this was a “tick the box” assessment.

The recommendation was that I aim for hairdressing or chicken sexing. I still do not know, or care, how to identify the sex of said chickens. Suffice to say, I had a career in nursing and later, between marriage and four children, did very well studying at the University of Melbourne.

The “experts” often don’t get it right and adults have a huge responsibility towards affirming the potential of girls.
Maree Jeffs, Mooroolbark

Re “More places, longer hours in $9 billion kinder plan” (The Age, 16/6). We know that one in five Australian children are developmentally vulnerable when they start school.

This number jumps to two in five for children who do not access early childhood education and care in the years before primary school.

When children fall behind in their development of cognitive and social skills early on, this disadvantage can become entrenched later in life.

The Victorian government’s overhaul of early childhood education, including free kindergarten, has the ability to change the life trajectories of children. The early years are getting the attention they deserve, and all kids will benefit.
Aileen Ashford, CEO, Kids First Australia, Thomastown

Match made in heaven

Re “Dan and Dom’s unlikely bromance” (The Age, 17/6). A Labor and a Liberal premier agreeing to work together for the benefit of their two states.

Fantastic – there should be more of this. When both sides of politics work together, the outcomes can only be positive.

Seeking another Barnaby
Your correspondent calls on Anthony Albanese to “do something” about Julian Assange (Letters 16/6). Last year then deputy prime minister Barnaby Joyce stridently supported Assange’s release from the US legal system. Labor MPs were silent.

The new prime minister has hinted there are quiet discussions behind the scenes with the Americans about the release of Assange. However, it might take the determination of a “Barnaby Joyce” within Labor’s ranks to free him.
Des Files, Brunswick

Failure of the big parties

Paul Strangio (Comment, 16/6) suggests some people see the falling two-party vote as a failure of our electoral system, not a failure of the parties losing the votes. But entrenching a political power duopoly by changing the voting system to suit existing political interests is only 50per cent worse for democracy than entrenching a one-party monopoly.
Julia Thornton, Surrey Hills

Jessica Irvine says, “longer term, the only path to sustainable real wages growth (higher-than-inflation wages growth) is a sustained improvement in the productivity of our workforce” (Comment, 16/6). I feel this idea is on the nose, if not impossible.

There are also expensive safety compliance risks to the whole chain of responsibility (from despatcher to loader, client, and office workers in between) if drivers work beyond certain hours.

Irvine also says, “we need employers to keep investing in new equipment”. A trucking company might purchase a new truck to save a little fuel per kilometre – although that could cost half a million or so dollars which may not be feasible for many companies in the current economical climate.
Susan Brown, Maryborough

ABC of our republic

More than 220 people lost their lives to COVID-19 in the first few weeks of June. How would we react to 220 deaths from car accidents over the same time? Are we now “immune” to it?
Elizabeth Meredith, Surrey Hills

It is time the federal and state governments reviewed ownership of our energy supplies. Private ownership is not what it is cracked up to be.
Barry Revill, Moorabbin

The grand prix will remain at Albert Park until at least 2035 (17/6). Is this consistent with Victoria’s policy regarding fossil fuels?
Kevan Porter, Alphington

A so-called win for the grand prix is a massive loss for climate change and the taxpayers.
Mary Fenelon, Doncaster East

Albo, nationalise the essential services and get rid of the energy retailers and middle men. Just do it.
Ian Anderson, Surrey Hills

When the sun doesn’t shine and the wind doesn’t blow, do coal-fired power stations go on strike in sympathy?
Ron Burnstein, Heidelberg

It was so uplifting to read that Eric Abetz has lost his seat in the Senate.
Greg Norton, Box Hill

From Abetz to Zed, and a heartland awash with teal and red, the Libs just couldn’t win a trick.
Jenny Bone, Surrey Hills

Will the ABC’s next expose of bias and inequality in the workplace focus on the dysfunction within its own ranks (17/6)?
Mary Cole, Richmond

I was impressed by Kyrgios’ post-match interview (17/6). He was humble, thankful, and reflective.
David Cayzer, Clifton Hill

Bunnings, Kmart and The Good Guys – get out of my face.
Ross Williamson, Foster

Bailey Smith is fortunate – that he doesn’t play for Collingwood. If he did, he would have copped six months at least.
Steve Melzer, Hughesdale

My travel plans for Vladivostok are in tatters now that Vladimir Putin has put me on his banned list.
Charles Laycock, Castlemaine

Gay Alcorn sends an exclusive newsletter to subscribers each week. Sign up to receive her Note from the Editor.