Incredible footage has captured the moment Jacinda Ardern appears to push a sign language interpreter out of her way during a nationally televised Covid press conference.

The uncomfortable moment was shared to TikTok on Saturday showing the New Zealand prime minister speaking to reporters – before stepping away from the microphone and directly into the interpreter.

Ms Ardern, 41, then steps back again, forcing the interpreter out of frame completely before the woman walks around her and back in front of TV crews – giving the nation’s leader a priceless look before she continues signing for the hearing impaired.

The moment hasn’t been well-received by Ms Ardern’s constituents, who pointed out that the oblivious move was ‘rude’ underneath the video.

‘What a bully! Wolf in sheep’s clothing,’ one person said.

‘So disrespectful. I used to think she was cool but far from it now,’ added another.

However, others were quick to point out the interaction wasn’t intentional.

‘She was just moving out of the way for the other speaker to come on, she even smiled at her afterwards.’

Most of the comments were just tickled by the expression the interpreter gave.

‘This was innocent and the sign ladies face is hilarious,’ one said.

‘Love the look she gives to Jacinda when she moves back in front the camera,’ added another. 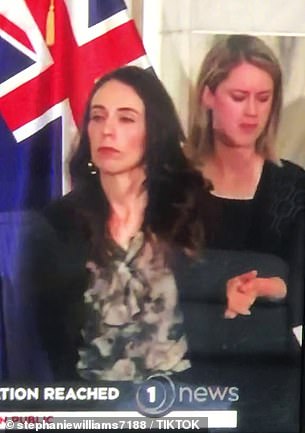 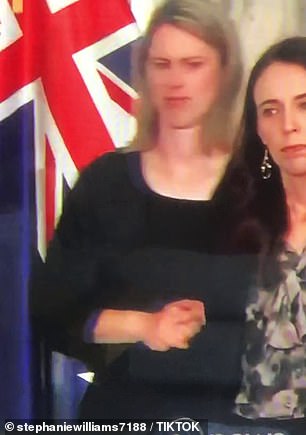 Many people commenting said the expression on the sign language interpreters face was hilarious. Ms Ardern apologised after the incident (pictured)

Video from the longer media conference shows Ms Ardern very quickly registered that she had pushed the woman out of the way and smiles and nods at her in apology.

Ms Ardern’s press conferences have been notable in recent days not only for the subject material.

A day earlier her media address was interrupted by an earthquake which shook the stage, causing her to share an alarmed expression with the sign language interpreter.

The earthquake was later revealed to be a 5.9 magnitude quake which had struck the North Island.

Ms Ardern very quickly regained her composure and pushed on.

‘Sorry, a slight distraction … would you mind repeating that question?’ she said. 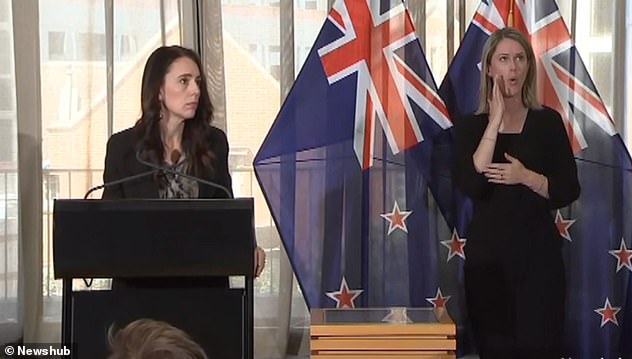 On Friday, Ms Ardern and the same interpreter were briefly rattled by an earthquake, which struck as she was addressing the nation for a Covid-19 update

On Monday, New Zealand reported 109 new locally acquired Covid cases and revealed 87 per cent of the country has had one vaccine dose.

A 90 per cent double-vaccination target was announced by Ms Ardern on Friday.

The alert level system is also set to be replaced by a traffic light system and vaccine mandates have been announced for health, education and prison workers.

Aucklanders – who have spent almost 10 weeks in lockdown – will be the first movers to a new traffic light style.

Auckland’s 1.7 million residents will move from alert level three to ‘code red’ on the new system when 90 per cent of Aucklanders aged 12 and over are fully vaccinated against COVID-19. 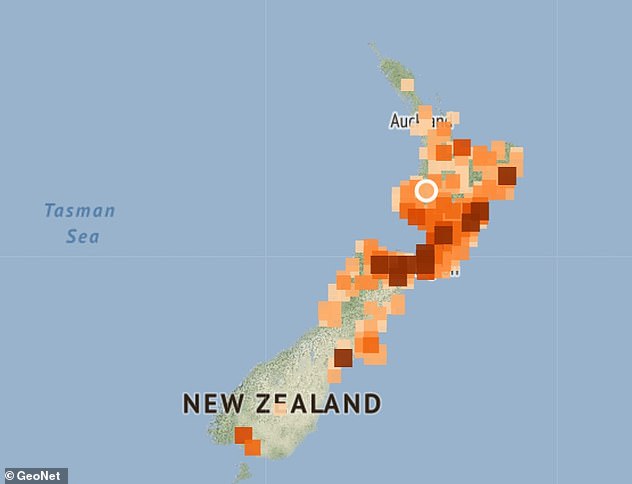 Pictured: The epicentre of Friday’s earthquake near Nueva Plymouth on New Zealand’s North Island. Geonet said the quake was recorded at a depth of about 210km and was felt across the country

‘This is within Auckland’s grasp.’

But the vaccine mandates have sparked fury from some New Zealanders.

She claimed that mandatory vaccinations were ‘rape’ and that Friday’s earthquake was ‘Mother Earth’ rising up against a tyrannical leader. 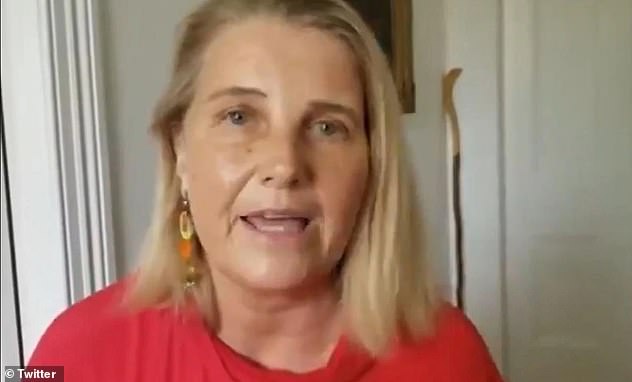 She claimed the vaccine passport to be introduced in New Zealand would divide the population.

‘These completely misguided lies Ardern is telling us. The poisoning with arrogant tyrannical leaders. All of this is it stops with this earthquake. That’s what our mother was explaining to us. We must listen to her. Even those who think Ardern is amazing.’

‘Stop and think, what will this country be like in a generation or two generations if a leader like this is allowed to jab rape. Because it is rape to force something in someone’s body.’

Ms Gunn was a presenter with TVNZ for more than a decade between 1990 and 2003 before she quit live on air amid reports she had not clicked with new co-host Mike Hosking.

She continued to work at Radio NZ until 2016 and is now the executive producer and presenter for a creative content agency.