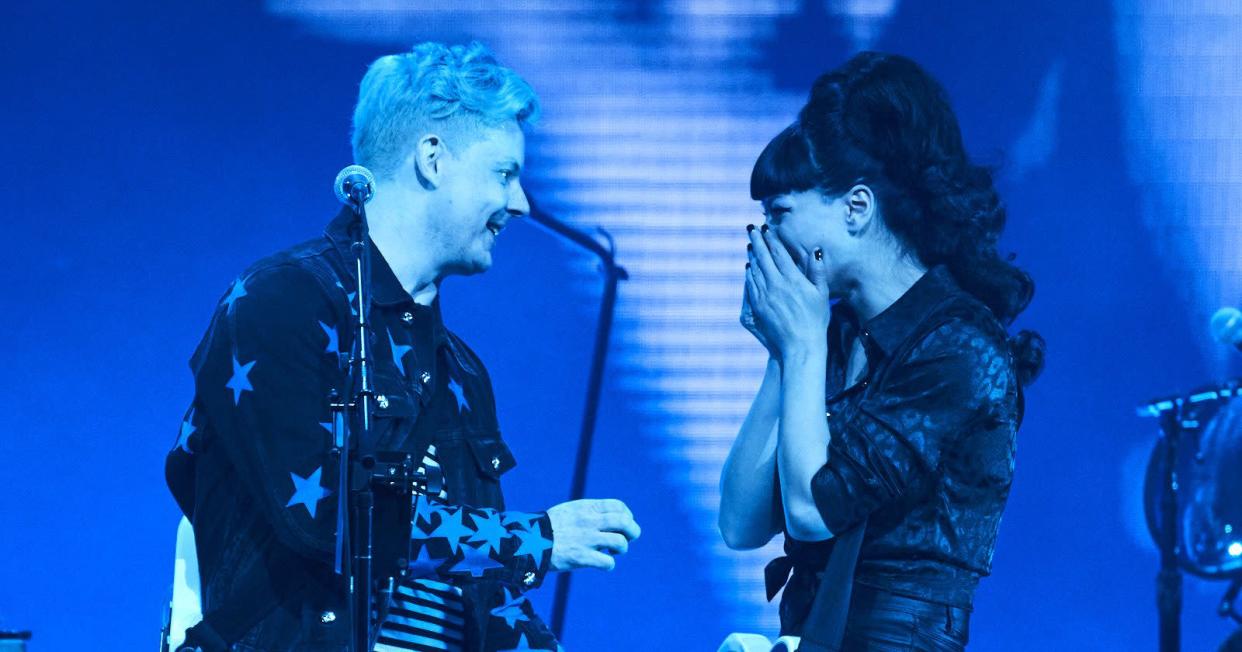 Jack White’s to-do checklist was a busy one Friday: Release new album. Play the National Anthem for the Detroit Tigers’ opening day. Open tour in Detroit. Get married during encore.

The rocker wed Olivia Jean, a singer on his Third Man label who had served earlier in the evening as his concert’s opening act, on stage at the Masonic Temple Theatre, a storied venue in the pair’s mutual hometown. The surprise marriage proposal itself had come just minutes earlier, in the middle of a rendition of “Hotel Yorba.”

Third Man’s top man, Ben Swank, presided over the nuptials, in which White’s and Jean’s bass players served as best man and maid of honor.

Per the account of Detroit Free Press writer Brian McCollum, the headliner was 80 minutes into his set and performing “Hotel Yorba,” which he’d brought Jean out on stage to sing background vocals on, when the show took a detour. White introduced her as his girlfriend and said, “And I love her very much,” an unusual PDA for White, although things were about to get more unusual.

The song has a lyric, “Let’s get married,” the approach of which was White’s cue to have the band drop out and to get his assistant to start filming the proceedings on a cell phone.

“I’ve got a little question for you, Olivia Jean. Will you marry me?” he said. After she “signaled a gushing yes, her face tear-streaked,” as McCollum put it, they finished the White Stripes’ signature number — with White picking it back up with a jubilant reading of that “Let’s get married” line — and he carried his fiance offstage.

Minutes later, they returned to the stage for an encore that included a wedding ceremony, for which White’s mother, Theresa Gillis, was on hand. Jean’s father also came onto the stage mid-vows, which led White to take him aside and ask if they had his blessing — “be honest!” Video posted by TMZ shows that Swank customized the vows so that Jean promised to always tell her husband “what’s up,” while it was only White who was sworn to “obey” his spouse.

Fan footage of the nuptials is in short supply, since White is a longtime, proud proponent of requiring fans to have their phones locked in Yondr pouches at his concerts, but fans did sneak some video of the proposal and subsequent ceremony.

It’s the third marriage for White, who was previously wed to White Stripes drummer Meg White and model Karen Elson, who also recorded for Third Man.

Jean has a long history on White’s label: A lone album with her group the Black Belles was released in 2011, followed by a pair of solo efforts for Third Man, the most recent of which ws 2019’s “Night Owl.”

White’s very busy day Friday had started with the official release of his new solo album, “Fear of the Dawn,” of which Variety said in a review, “White’s latest is thrilling enough to almost singlehandedly make up for how unexciting most of the rest of rock ‘n’ roll is right now.” (See the full review here.)

His release date for the album coincidentally dovetailed nicely with what turned out to be the belated opening day game for his beloved Detroit Tigers, with the noted baseball fanatic wearing a team jersey at Comerica Park. Lest anyone worry whether White could hit the notes as well as Whitney Houston, he performed the tune as a slide guitar-based instrumental with his touring band (see video below).

“God bless you Detroit,” fans reported White saying as Friday’s show wrapped up. “What a day.”

Any honeymoon may have to wait a while, as White’s Supply Chain Issues tour continues steady as she goes through May 1, although there is a gap of several weeks before it resumes May 23. Jean is also set to be the opener for the next two shows, tonight again in Detroit and then Sunday in Grand Rapids, although what they’ll do for an encore to that encore remains to be seen.