Jeremy Corbyn today refused to say whether he believed ‘life should mean life’ for terrorists convicted of the most serious offences.

He was also forced to deny that he and his allies want to abolish the UK’s intelligence services.

He made the remarks during an appearance on ITV’s This Morning programme as he was grilled by Phillip Schofield and Holly Willoughby.

It came after Boris Johnson suggested Mr Corbyn would be a security risk if he becomes PM.

Mr Johnson said the UK’s closest allies were ‘very anxious’ about Mr Corbyn being elected to Number 10 and accused him of being ‘naive’ to the terror risk Britain faces in the wake of the London Bridge attack.

Mr Corbyn is desperately trying to kick start Labour’s general election campaign amid signs that the party is stalling in the polls and still remains a long way behind the Tories.

But the Labour leader’s appearance on TV this morning was dominated by questions about his approach to justice and national security. 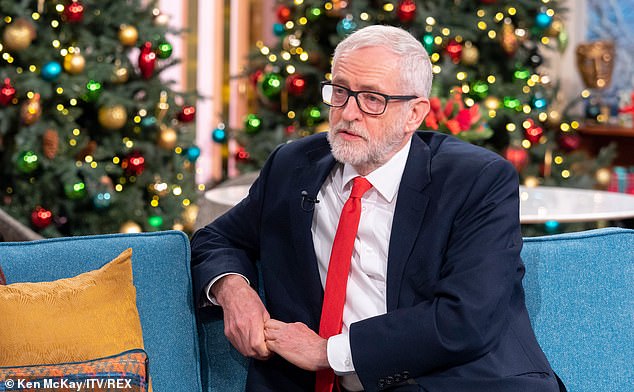 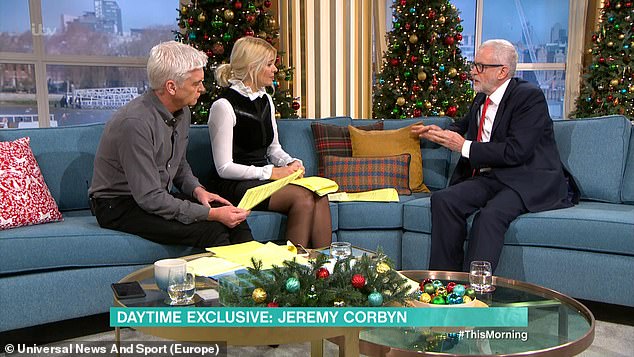 Mr Corbyn was asked by Mr Schofield ‘should life be life’ for terrorists convicted of the most serious offences.

‘But the point I am making very strongly is that our prison service is woefully underfunded and the rehabilitation and the programmes to stop people being radicalised have often been insufficient in prison and I think the lesson from this horrible tragedy is that we have to improve that.’

His latest remarks come after he said yesterday that convicted terrorists should only be released from prison after completing a ‘significant proportion’ of their jail sentences.

He also stressed that they must have been rehabilitated so they present no threat to the public and must also remain under strict supervision.

Mr Corbyn said in an interview broadcast by Sky News on Sunday that convicted terrorists should ‘not necessarily’ have to serve the entirety of their prison sentences.

Meanwhile, in an extraordinary moment Mr Corbyn was forced to deny that he would scrap MI5 if he wins the election on December 12.

Mr Schofield referred to comments previously made by shadow home secretary Diane Abbott who had backed calls for MI5 to be axed.

But Mr Corbyn responded to the question by insisting: ‘I am not calling for the abolition of any of our services.

‘I am calling for accountability of our services.’

Ms Abbott signed a parliamentary motion back in 1989 which called for the ‘abolition of conspiratorial groups like MI5 and special branch’.

She distanced herself from the statement in May 2017 during an appearance on the BBC’s Andrew Marr Show.

She said at the time: ‘At that time I and a lot of people felt MI5 needed reforming. It has since been reformed and of course I would not call for its abolition now.’