Titan Airways jet made emergency landing at Gatwick when engine caught fire and the other stalled after fuel was contaminated by mechanic, report reveals

A Titan Airways jet made an emergency landing at Gatwick when one of its engines caught fire and the other stalled after fuel was contaminated by a mechanic, a report has revealed.

Investigators found disaster may only have been averted near the Sussex airport as it was flying light with no passengers and just seven crew, in quiet airspace and in clear conditions on February 26 last year.

The report by the Air Accidents Investigation Branch said that an engineer had added 38 times too much biocide, an anti-bacterial chemical, to fuel tanks before the flight because he did not understand that ‘ppm’ meant ‘parts per million’.

The excess quantity of Kathon treatment contaminated the fuel and caused the partial failure of the jet’s engines due to the build up of residues, the report concluded. 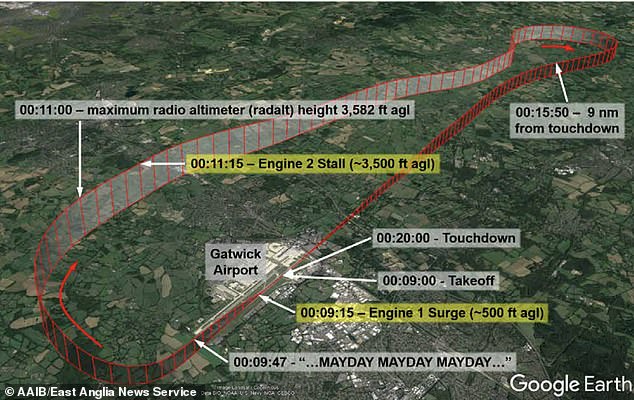 A diagram shows the flightpath of the jet, which had to make an emergency landing after issues with its engines were discovered

The terrifying incident began soon after the Airbus A321-211 took off from Gatwick airport on a short flight to Stansted, and the pilot noticed that his number one engine was ‘banging and surging’ at a height of 500ft.

He told investigators how the jet was ‘yawning and fishtailing all over the place’ as his cabin crew told him by intercom that flames were billowing out of the engine’s tailpipe in the darkness.

The 28-year-old pilot sent out a Mayday alert just 47 seconds after taking off and disengaged his autopilot so he could take manual control of the 236-seat plane and land back at Gatwick.

But as he turned his jet, he noticed that controls of his number two engine had also begun to fluctuate and he received three alerts in quick succession, saying that it had stalled, according to the AAIB report.

The pilot levelled the plane at 3,582ft, and managed to stabilise the engines by operating them at just under half power, before landing safely at 12.20am on February 26 last year, just 11 minutes after taking off.

The report said that the actions of the pilot and co-pilot in ‘flying a prompt and accurate approach’ back to the runway using less thrust than usual ‘contributed to the safe outcome.’

It added: ‘The circumstances of the incident flight were that the aircraft was relatively light in weight, the airspace was quiet, and the weather conditions were calm and clear.

‘Crew A did not have sufficient time to consider shutting down engine No 1 before engine No 2 began stalling and were therefore able to use power from both engines for the remainder of the flight.

Investigators found disaster may only have been averted near the Sussex airport as the plane (pictured) was flying light with no passengers and just seven crew, in quiet airspace and in clear conditions

‘Had the conditions been less favourable, engine and aircraft performance could have been insufficient to maintain a safe flightpath – possibly while over-flying the built-up areas near Gatwick Airport.’

The report said that the Kathon biocide treatment was supposed to be added to the fuel tanks at 100 parts per million while the aircraft was being serviced at an overseas maintenance depot.

But an engineer instead added the equivalent of 3,814 parts per million into the aircraft’s fuel tanks in its wings.

The report said that he only spoke English as a second language and did not understand what the term ‘ppm’ meant, meaning he struggled to work out what quantity to use.

The engineer who had never used biocide treatment before ended up searching the internet and using an online calculator, but was unable to recall which website he had used.

He ended up pouring 30kgs of Kathon into each wing tank when he should have used 0.8kgs on each.

The report found that he had also made an error by pouring the biocide directly into the tanks, so that it pooled in the bottom, rather than mixing it up with fuel and then putting it in.

His actions made the contamination problem even worse because the fuel pump inlets would have been submerged in the Kathon-rich layer when the aircraft was angled up while taking off and increasing height. 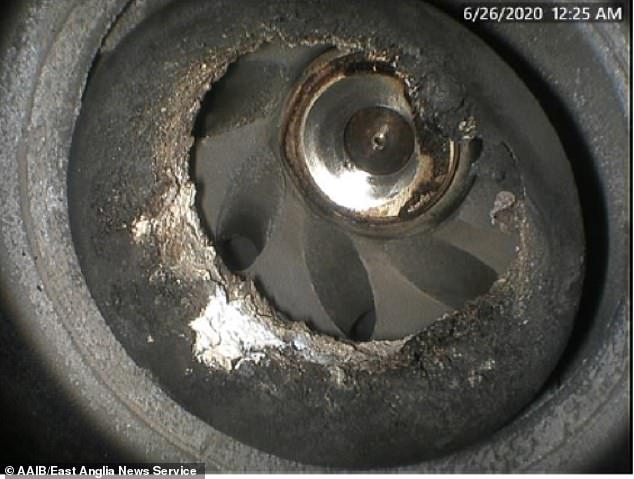 The excess quantity of Kathon treatment contaminated the fuel and caused the partial failure of the jet’s engines due to the build up of residues, the report concluded

Problems with the two engines were noted over the following 24 hours when the plane wasflown four times.

A fuel valve alert message was displayed when the plane was on the ground at Stansted before flying to Gatwick and going on a return flight to Krakow, Poland.

One engine took three attempts to start on the return from Krakow and the crew noticed a slight vibration in the airframe while descending to land at Gatwick.

An engineer at Gatwick examined the aircraft on the ground using a troubleshooting procedure and found nothing wrong, but the document he used was for a different class of engines to the ones on the jet.

The plane took off again for Stansted after three attempts had to be made to start the number one engine. The same engine then began to surge just 15 seconds after take off.

An examination of the engines after the incident found 17 compressor blades had been damaged in one of them.

Fuel filter debris in both engines also showed a high level of magnesium which is a constituent element of Kathon while the combustion chambers and blades were coated with a thin layer of white material which later crystallised due to condensation.

Brown sticky deposits, consistent with coming from Kathon, were also found in the engines, said the report. 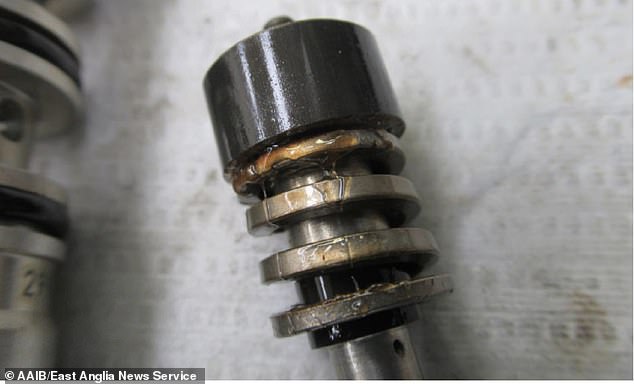 Investigators made safety recommendations, calling for the European Union Aviation Safety Agency to classify the use of biocide additives as a ‘critical maintenance task’ and subject to tighter rules and procedures.

The report said that Airbus was also in the process of replacing the term ‘parts per million’ or ‘ppm’ in its maintenance literature to the more easily understood ‘ml/1,000ltrs’.

Crispin Orr, Chief Inspector of Air Accidents said: ‘This was a very serious incident that in different circumstances could have had a catastrophic outcome.

‘The safety of commercial air transport aircraft depends in part on redundancy of safety critical systems such as engines. However, fuel contamination can affect all engines simultaneously and so it is essential that maintenance regimes are resilient to errors that could lead to fuel system contamination.

‘Five Safety Recommendations have been made in this report to regulators to promote the classification of biocide treatment of aircraft fuel systems as a critical maintenance task. This would ensure that an error-capturing method is included as part of the task.’