A no-holds-barred letter from John F. Kennedy to Sir Winston Churchill’s son has come to light 67 years after it was written.

The future U.S. president fired back at Randolph Churchill after the British politician publicly denounced America’s ‘holier-than-thou’ attitude over the infamous 1938 Munich Agreement.

The treaty for peace in Europe in exchange for Germany reclaiming the Sudetenland of Czechoslovakia was later broken by Adolf Hitler, leading to the Second World War. 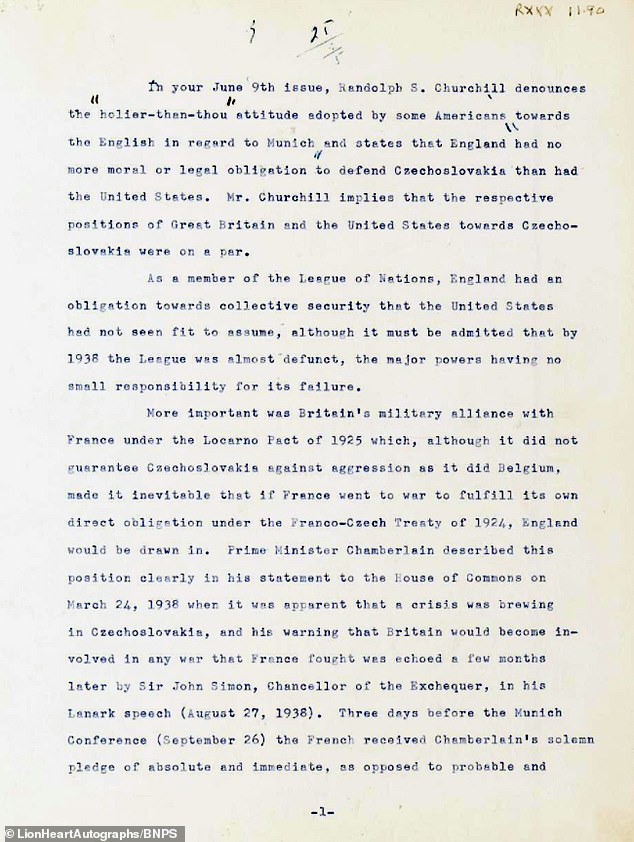 A letter from John F. Kennedy to Randolph Churchill is going up for auction on Wednesday in the U.S, in which Kennedy accused Britain of showing ‘tardiness’ towards rearming in the interwar years 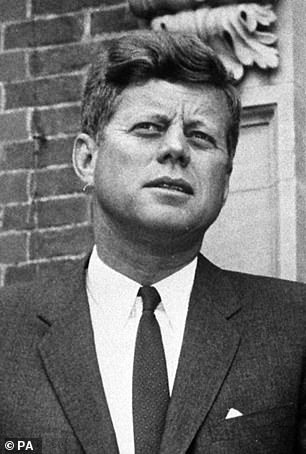 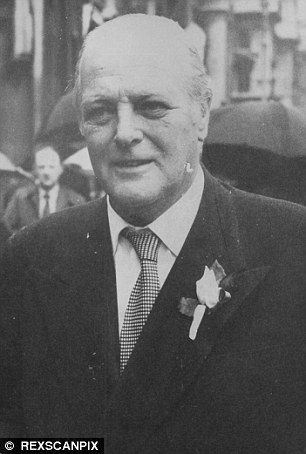 Randolph Churchill (right) publicly criticized America’s ‘holier than thou’ attitude over the 1938 Munich Agreement, prompting a letter of response from the future President (left)

Kennedy took umbrage at Churchill’s claim that the US had as much responsibility to protect Czechoslovakia from the Nazis as Britain did at the time.

Writing on June 13, 1952 – eight years before he was elected President – Kennedy argued that Britain and France had far closer ties to the country.

Kennedy also accused Britain of showing ‘tardiness’ towards rearming against the threat of the Nazis and said the country pursued appeasement with Hitler as it brought it more time to prepare for war.

The four-page letter came on top of Kennedy’s 1940 thesis titled ‘Why England Slept’ which examined Britain’s perceived failure to respond to German aggression after World War One.

In the draft letter sent to Time magazine, he wrote: ‘Randolph S. Churchill denounces the “holier-than-thou” attitude adopted by some Americans towards the English in regard to Munich and states that England “had no more moral or legal obligation” to defend Czechoslovakia than had the United States. 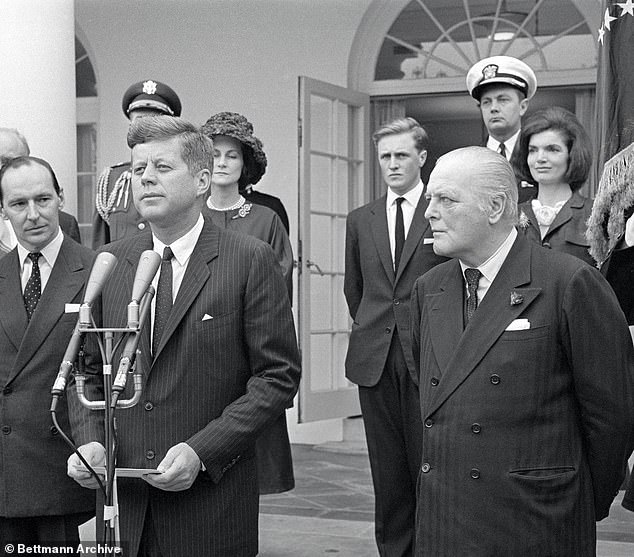 President Kennedy signs a proclamation making Sir Winston Churchill an honorary citizen of the United States. Churchill’s son, Randolph (right), attended the ceremony and made the acceptance for his father 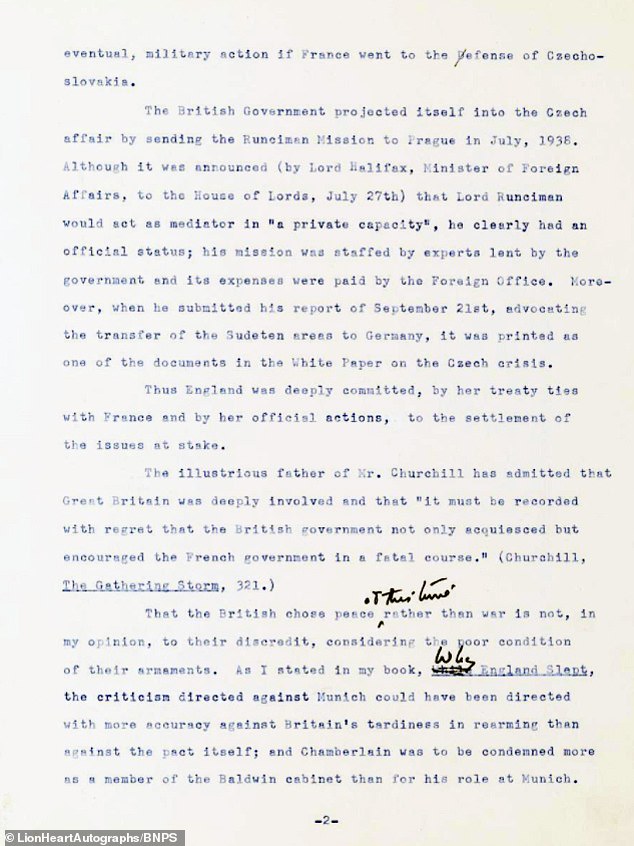 ”That the British chose peace at this time rather than war is not, in my opinion, to their discredit, considering the poor condition of their armaments,’ Kennedy wrote 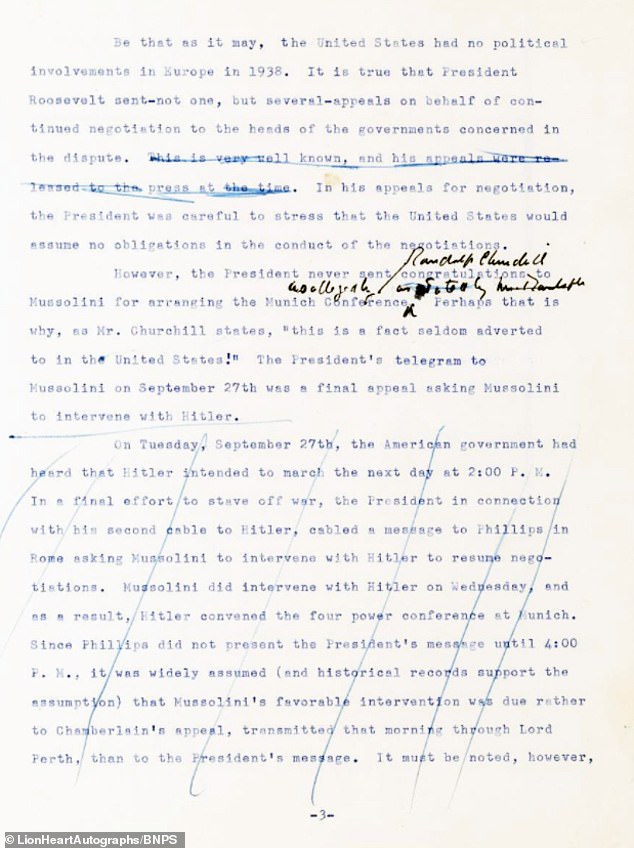 The draft letter has emerged for sale 67 years after it was written with U.S. auctioneers Lion Heart Autographs

‘Mr Churchill implies that the respective positions of Great Britain and the United States towards Czechoslovakia were on a par.

‘As a member of the League of Nations, England had an obligation towards collective security that the United States had not seen fit to assume.

‘More important was Britain’s military alliance with France… which although it did not guarantee Czechoslovakia against aggression, made it inevitable that if France went to war… England would be drawn in.

‘Thus England was deeply committed, by her treaty ties with France and by her official actions, to the settlement of the issues at stake.

‘That the British chose peace at this time rather than war is not, in my opinion, to their discredit, considering the poor condition of their armaments. 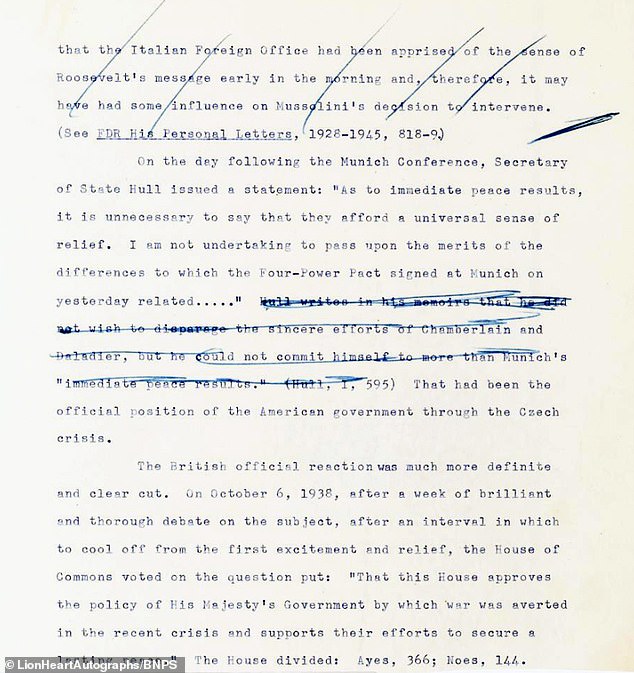 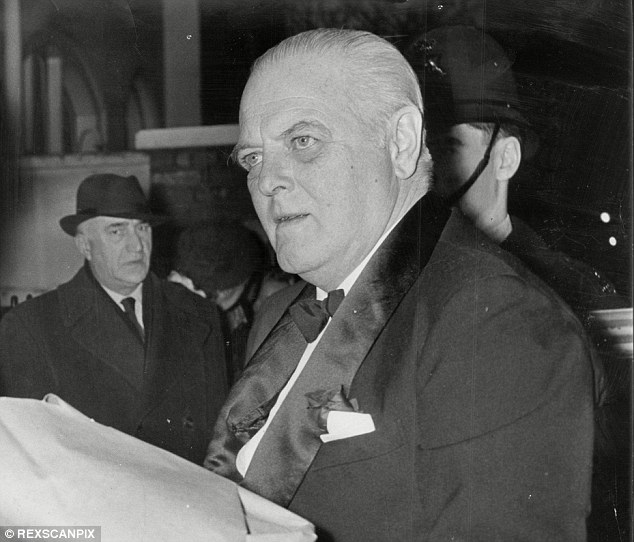 Politician Randolph Churchill was the son of British Prime Minister Winston Churchill and his wife Clementine. He was a Conservative MP for Preston from 1940 to 1945

‘…the criticism directed against Munich could have been directed with more accuracy at Britain’s tardiness in rearming than against the pact itself.’

The draft letter has emerged for sale with U.S. auctioneers Lion Heart Autographs, who have not disclosed an estimate.

Director David Lowenherz said the letter ‘presents a cogent examination of how necessary it is to retain with accuracy the small steps that led from the false peace of Munich to World War Two.

‘It is particularly relevant today as we have just finished commemorating the 75th anniversary of D-Day.’

The letter is being sold on Wednesday.