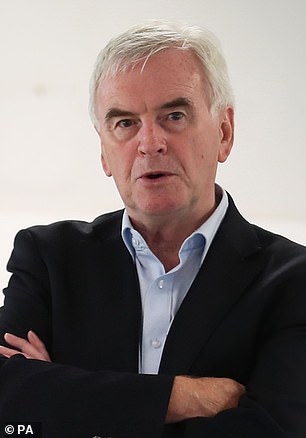 The move is being furiously opposed by leader Jeremy Corbyn who has only recently been persuaded by Mr McDonnell to back a second referendum on a Tory Brexit deal and then campaign for Remain.

And Northern Labour MPs, who fear they could lose their seats in Brexit-supporting constituencies if Labour defies the 2016 Leave vote, have reacted in fury.

But party sources insist the Shadow Chancellor now believes Labour must vote to halt the Brexit process all together if that was the only way to stop a ‘disastrous’ No Deal exit on October 31.

Mr McDonnell is understood to have made his views clear during meetings with Shadow Cabinet colleagues.

A source said: ‘John is a far savvier political operator than Jeremy and he believes the party has to scoop up Remain votes if it is to stand any chance in a General Election.’

However, critics insisted any vote to stop the Brexit process would never get through even if ‘approaching 200 Labour MPs’ backed it.

One senior Labour MP said: ‘Lots of my colleagues might go for it but others wouldn’t and it would get voted down by the Tories.

And then if there was a General Election, we’d be wiped out in Brexit-backing constituencies.’

However, the Labour leadership is coming under pressure from party activists to cancel the Brexit process.