Just 356 £100 fines have been issued to people for failing to wear face masks on public transport while 4,400 rule-breakers have been stopped from boarding trains and buses

Grant Shapps today revealed fewer than 400 fines have been issued to people for failing to wear face masks on public transport since restrictions came into force more than two months ago.

The wearing of face coverings on trains and buses has been compulsory in England since June 15.

Anyone who refuses to comply with the rules can be hit with a £100 fixed penalty notice.

But the Transport Secretary said this morning that just 356 fines had been imposed up to the middle of August.

Meanwhile, he said that some 4,400 people had been stopped from boarding public transport for failing to wear a mask. 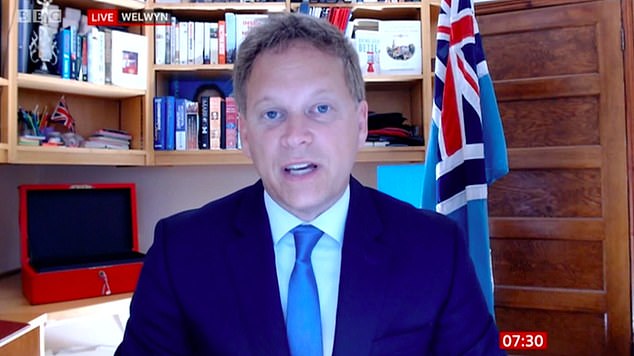 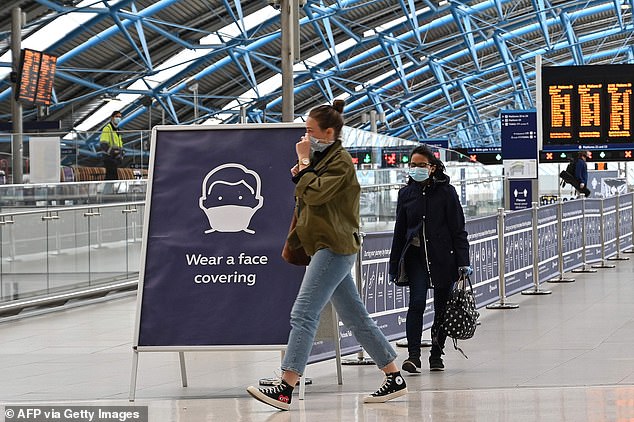 People who fail to wear a face covering on buses or trains in England can be hit with a £100 fine. Passengers are pictured at Waterloo train station in central London

Asked during an interview on BBC Breakfast how many people had been fined for not wearing a face covering on public transport, Mr Shapps said: ‘I can tell you over 100,000 people have been stopped and reminded.

‘There have been, I have got some numbers here actually, 4,400 people that have been prevented from boarding public transport and hundreds have received fixed penalty notices.’

Pushed again on how many fines had actually been issued, the Transport Secretary said: ‘I have got a number actually which was from August 16 which was 356 fixed penalty notices but that is now a couple of weeks out of date.

‘The numbers come in retrospect from the police etc. But since that time we have also put in place a scheme where the fines have doubled and they go up to £3,200 so although they start off at £100, repeat offenders would be in difficulty.

‘Don’t forget, not everybody is required to wear a mask. There can be medical reasons not to so as you look around your train or your bus there may be people there who cannot wear a mask and that is quite proper.’

The Government’s original fining policy was that rule-breakers would receive a fixed penalty notice worth £100 which would be reduced to £50 if paid within 14 days.

But ministers announced in the middle of August that the fine was being increased, with the value doubling for each repeat offence up to a maximum of £3,200.

Mr Shapps also today revealed that 4,200 cases of people breaking quarantine rules have been referred to the police.

He told Times Radio: ‘Well I know that the police figures or the border force figures come out retrospectively so I don’t have those.

‘But I can tell you that 4,200 cases have been referred to the police for breaking the quarantine.

‘And a reminder that you are in danger of getting a criminal record as well as the fine if you break the quarantine, it is a serious matter.’