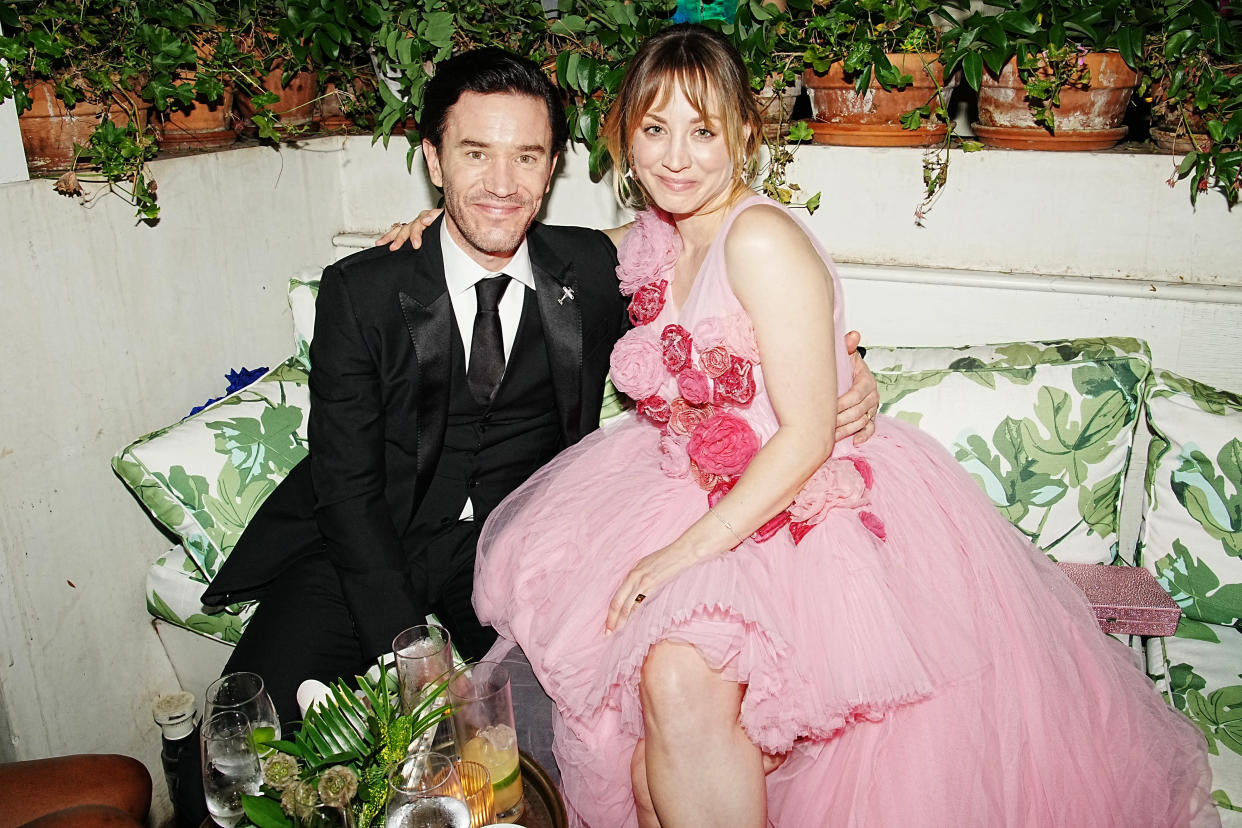 Kaley Cuoco and boyfriend Tom Pelphrey are expecting their first child together — and it's a girl! TheBig Bang Theory alum revealed she's pregnant on Tuesday, even giving fans a peek at her baby bump.

"Baby girl Pelphrey coming 2023," the 36-year-old actress wrote on Instagram. "Beyond blessed and over the moon…"

Cuoco shared photos of her pregnancy journey so far, including what looks like a gender reveal cake. The actress also included a snapshot of when she found out she was expecting — with four pregnancy tests, no less. In another picture, Pelphrey is seen holding The Flight Attendant star's growing belly.

Cuoco previously said it was "absolutely love at first sight" when she met the Ozark actor.

Cuoco and Pelphrey, 40, went public with their relationship in May, months after the actress split from her second husband, Karl Cook. Cuoco and Cook were married for four years, but amicably parted ways in Sept. 2021. Cuoco was married once before to tennis player, Ryan Sweeting, from 2013 to 2016.

It's unclear if Cuoco's baby news changes her stance on marriage. The actress previously vowed to never wed again.

"I will never get married again," Cuoco told Glamour for the magazine's April cover story. "Absolutely not. You can literally put that on the cover."

Cuoco explained that she "would love to have a long-lasting relationship or a partnership."

"I believe in love because I've had incredible relationships. I know that they're out there. I like being someone's partner and having that companionship," she shared, adding: "I want to have a relationship that I give my time to and that the person feels [like they're] really part of my life. I get so distracted with work and I want to have that in the future."

"Well CONGRATULATIONS," Sharon Stone, who starred alongside Cuoco in Season 2 of The Flight Attendant, wrote. "It's wonderful to see you happy pants."

"Kaley and @tommypelphrey!!!!! I am so beyond thrilled for you guys!!!!! Beautiful beautiful," Odette Annable shared.

MORE: Kaley Cuoco and Karl Cook finalize divorce as she moves on with Tom Pelphrey