Kelly Rowland weighed in on a video that went viral over the weekend from Sesame Place Philadelphia in which a park employee, dressed as Sesame Street‘s Rosita, seemingly ignored two Black girls. The park is denying accusations of racism and claimed the whole thing was a “misunderstanding.”

Rowland posted the clip to her Instagram Story, writing, “TF! This just made me So mad!” She also addressed her 13.4 million followers directly.

“OK so, had that been me, that whole parade would have been in flames,” the Destiny’s Child singer declared on Sunday. “Like, are you serious? You’re not going to speak to my child? And did you see that baby’s face at the end? The little one with the pink on? She deserves an explanation. Hello.”

The Wire alum Wendell Pierce related the video to a traumatic moment from his own childhood, calling it “violent” and “scarring.”

WITNESS THE END OF INNOCENCE. WITNESS THE TRAUMA. This moment is violent, scarring, psychological abuse. Watching it reminds me of my own. 4 years old on Mardi Gras Day being denied the joy I see other kids having and the realization the horrible reality. The immediate loss. Pain https://t.co/uarKvqocx3

A mother posted a clip on Saturday from the character parade showing the two girls excitedly waiting for Rosita. As Rosita makes her way to the children, the performer is seen interacting with onlookers who appear to be white. Rosita then seemingly makes a “no” gesture around the Black girls as they hold their hands out for a hug or high-five.

Sesame Place Philadelphia issued a statement late Sunday, claiming the “no” gesture wasn’t meant for the girls but directed to “someone in the crowd who asked Rosita to hold their child for a photo which is not permitted.” The park declared the performer “did not intentionally ignore the girls” and is “devastated about the misunderstanding.”

Our brand, our park and our employees stand of inclusivity and equality in all forms. That is what Sesame Place is all about and we do not tolerate any behaviors in our parks that are contrary to that commitment. We also are, and always have been, committed to making sure very family and every child has the best possible experience at our parks and we are incredibly disappointed when that does not happen. Regarding the incident yesterday, the costumes our performers wear sometimes make it difficult to see at lower levels and sometimes our performers miss hug requests from guests.

The performer portraying the Rosita character has confirmed that the ‘no’ hand gesture seen several times in the video was not directed to any specific person, rather was a response to multiple requests from someone in the crowd who asked Rosita to hold their child for a photo which is not permitted. The Rosita performer did not intentionally ignore the girls and is devastated about the misunderstanding. We spoke to the family and extended our apologies and invited them back for a special meet-and-greet opportunity with our characters. We apologize to these guests for not delivering the experience they expected and we commit to do our best to earn their and all our guests’s visit and support.

The mother responded on her Instagram Story and said she believes “that statement was released to save face.” She also claims that after a manager initially reached out to her, there has been “no communication.” She wants the park to issue “a public apology to my girls,” calling the statement “disrespectful and distasteful.”

“Talk about adding insult to injury,” she wrote. “I really tried to handle this situation calm as possible but I am hurt, and that response just made it worse! The character could’ve just waved to everyone or just kept walking, but to blatantly look at my kids and say no… Don’t try to tell me he can’t see lower levels. He looked at them and said no!! So embarrassing and hurtful. I will repost this video everyday until the situation is handled. Signed: A hurt mom.” 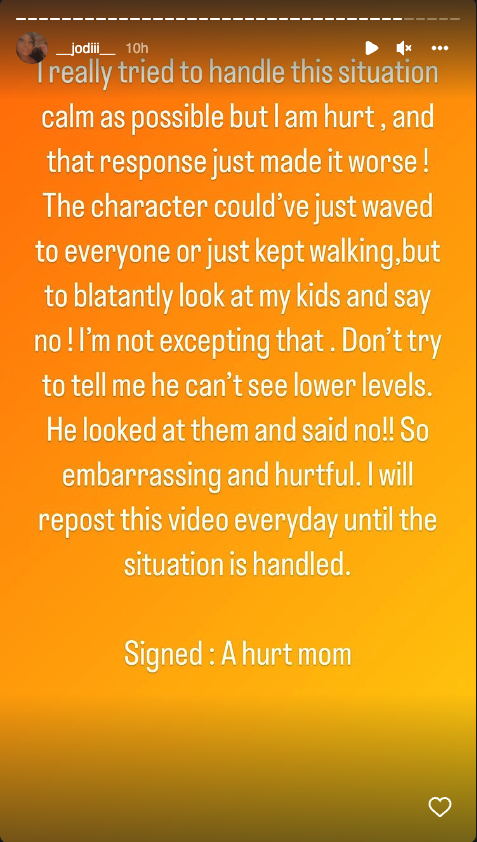