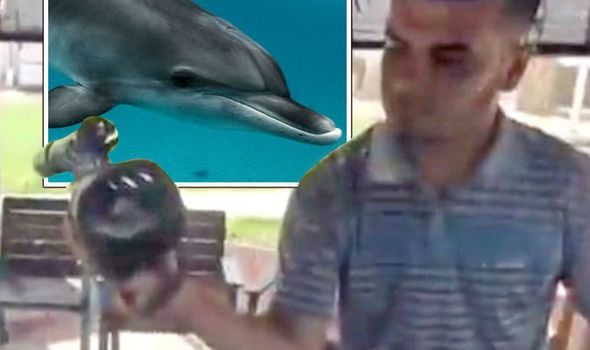 A spokesperson for the terrorist organisation claimed Israeli security forces used dolphins during an unspecified military operation. These were equipped with devices capable of killing.

In a video posted online, a figure representing Hamas is reported to claim the group found a dolphin that had been used in operations.

He wrote: “Killer Zionist dolphins exist, according to a Hamas publication.

“Abu Hamza explains that a member of Hamas’ Frogman unit who was killed by Israel during the May conflict found the killer dolphin.

“The device the alleged killer dolphin was wearing is shown in the publication.”

In the video, a man can be seen holding a contraption that looks likely to have been attached to the snout of a “killer” dolphin.

Defence publication HI Sutton considered that this device could have one of a number of purposes.

It could be a straightforward weapon.

It is, however, more likely that the harness device could be part of a system designed to “target [enemies] with a buoy”.

The site explained: “Dolphins cannot tell friend-or-foe so generally you would not expect them to deliver lethal force.”

Israel has a fleet of ‘Dolphin-class’ submarines.

But Hamas made it clear in its video that it was referring to the mammal, not to submarines, according to the Mail.

Israel has not responded to allegations.

It is possible the device is neither Israeli nor came off a dolphin.

However, if true, it would not be the only country to use such animals in its military efforts.

The Russian Navy is also thought to use marine mammals for cover operations, including surveillance.

America’s Navy also began working with bottlenose dolphins and sea lions in the 1960s to “help with mine detection”, according to Forces.net.