Two of America’s biggest shopping mall owners have agreed to take on JC Penney’s retail operations to save the department store from closing.

JC Penney had about 850 sites and employed more than 80,000 people when it declared bankruptcy in May.

The plan marks the landlords’ latest efforts to fend off retail’s struggles.

In February, Simon also teamed up with Brookfield to buy Forever 21, after the clothing chain declared bankruptcy.

The woes of JC Penney, founded in 1902 in Wyoming, also predate the pandemic. 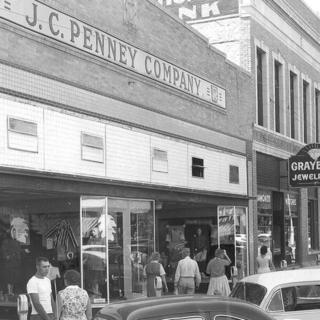 The company thrived during the 20th century, growing to become a staple of shopping malls throughout the United States. But competition from online shopping and other rivals saw sales slide in recent years.

The firm has since closed hundreds of stores and cut thousands of jobs. Last year it reported sales of $10.7bn (£8.2bn), a decrease of more than $7bn in 10 years.

The pandemic hastened that decline, forcing the temporary closure of its stores. It has since closed more than 150 locations.

The tentative deal to buy JC Penney, which requires court approval to move forward, would see Simon and Brookfield invest about $300m into the company and assume $500m in debt, a lawyer for the company said at a court hearing on Wednesday.

The firm is also seeking new financing, while other companies are expected to win ownership of roughly 160 stores, in exchange for forgiving some of the JC Penney’s $5bn debt load. About 650 stores are expected to stay open.

JC Penney, which had warned previously that rescue talks were not going well, said it planned to seek court approval of a final deal in October.

“There have been twists and turns but I think we are at a place now where we have significant momentum behind us,” attorney Joshua Sussberg said.

“Simon, Brookfield, the lenders and the company, the creditors committee are all committed to moving this forward quickly and saving JC Penney as we know it.”