The incredible footage begins with the big cat stalking its prey on a hill.

It then charges after the unaware zebra and leaps onto its back, digging its claws into its body.

The zebra immediately tries to get the creature off it by jumping up and down and jolting as it moves.

Hungry as ever, the lion refuses to budge so the black-and-white-striped animal then ups the ante.

It then decides to do what can only be described as a front roll.

And it works a treat, with the lion being shaken off to allow the zebra to attempt getaway.

The big cat manages to get hold of its behind but, this time, can’t maintain its grip and can only watch as its meal for the night runs into the distance.

It is not clear where the clip was filmed, but it was posted to YouTube in 2018 before being re-posted to Reddit earlier this week.

Viewers have flocked to the comments section to voice their thoughts. 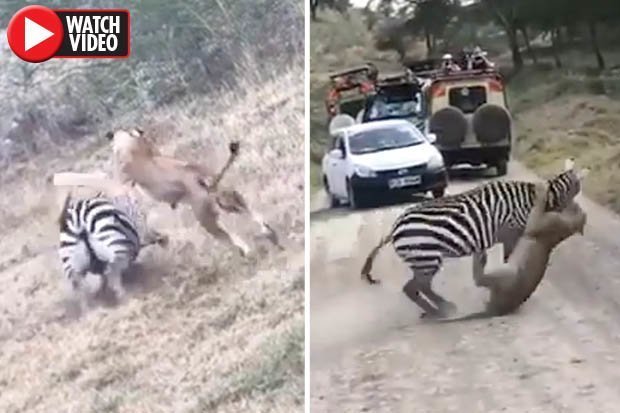 “That footage-taking was phenomenal, they didn’t miss anything,” one wrote.

Another commented: “Can’t catch’em all.”

It comes after the news broke that 14 lions have escaped Kruger National Park in South Africa.