Heathrow third runway is OFF the table for at least a decade: CEO says Covid means expansion may not be needed until economy recovers in ’10 to 15 years’ as airport loses £200m a month

The boss of London Heathrow has admitted it could be 10 to 15 years before the airport needs a third runway because of the coronavirus crisis.

John Holland-Kaye told MPs the airport’s £14billion expansion plan is no longer a priority – and suggested a failure to reboot the economy could see it scrapped altogether.

Heathrow have spent years arguing that a third runway is needed to boost the economy and keep up with an ever-increasing demand for air travel. 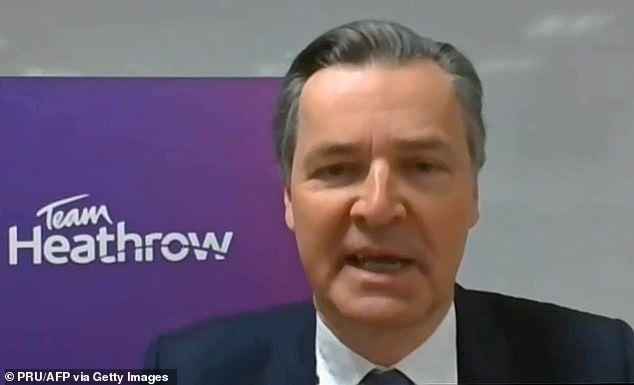 But the coronavirus pandemic means the future of the aviation industry is uncertain. The crisis is likely lead to a long-term fall in passenger numbers, with airlines flying reduced schedules for months or even years to come.

To add to the uncertainty, households have been warned to brace themselves for the worst recession in living memory – jeopardising the future of many big infrastructure projects, including Heathrow.

Speaking to the Commons transport committee, Mr Holland-Kaye said: ‘Whether that [third runway] will be needed we will have to see how things turn out over the next few years.

‘If we are successful in rebuilding the UK economy, we will be needed that in 10-15 years’ time if not, then I think we’re all in a different world.’ 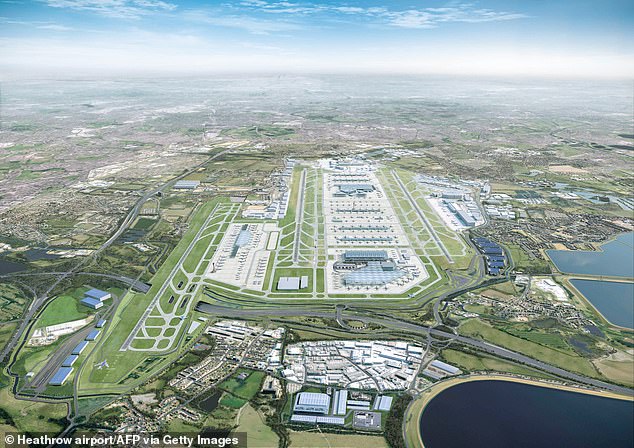 A computer generated image released by Heathrow on June 18, 2019 shows how it intends the airport will look like in 2050 following the completion of a third runway and new terminals

Mr Holland-Kaye also revealed the airport was burning through £200 million a month during the economic shutdown but has the liquidity to survive for up to a year.

December 2003: Labour ministers publish plans for a third runway at Heathrow, saying it is needed to keep pace with other European hubs.

January 2009: Gordon Brown green lights plans despite opposition from residents, environmental activists and many of his own MPs.

May 2010: The Tory-Lib Dem Coalition emerges after the election, and rules out the west London plans.

September 2012: The idea is revived as an independent commission is set up to look at expansion of Heathrow and Gatwick, and a new airport in the Thames Estuary.

July 2015: The Airports Commission recommends Heathrow should get a new runway.

July 2016: David Cameron resigns as PM in the wake of the EU referendum, and is replaced by Theresa May – with no decision taken on Heathrow.

July 2017: Heathrow scales back proposals for a new terminal to reduce project costs.

June 2018: Revised plans with a £14billion price tag are approved by Cabinet, with the proviso that taxpayers will not face any cost.

June 25, 2018: Greg Hands resigns from government to vote against the National Policy Statement (NPS) – effectively outline planning permission. But Boris Johnson, who previously vowed to ‘lie down in front of bulldozers’, is abroad in Afghanistan when MPs vote in favour by a majority of 296.

December 2019: As PM, Boris Johnson does not change official policy on Heathrow but says he will ‘find a way’ of honouring his bulldozer pledge.

February 2020: The Court of Appeal rules that the NPS was unlawful as government had not considered its obligations under the Paris Climate Change Agreement. The government says it does not support appealing the case, but Heathrow says it will go to the Supreme Court.

April 2020: The airport says all expansion plans will be pushed back by at least two years due to the disruption caused by the coronavirus.

May 2020: Heathrow admits it could be 10 to 15 years before the airport needs a third runway due to the crisis

Heathrow’s expansion plans were already in question following a Court of Appeal ruling in February, in which judges said the project was illegal because the Government had failed to take its climate commitments into account.

The airport has been due to challenge the court’s decision at the Supreme Court. Anti-third runway campaigners are now calling for the project to be scrapped.

Paul Beckford, policy director of the No 3rd Runway Coalition, said: ‘It is remarkable that even Heathrow’s chief executive now appears to accept that there may be no need for his expensive and climate busting third runway.

‘The economic case for a third runway has always been negligible, has been eroded by delays even before a planning application has been submitted and must now be non-existent given the uncertainty around future demand.

‘We believe that this uncertainty combined with the climate emergency means that Heathrow should withdraw their appeal to the Supreme Court and stop any planning or enabling costs associated with their expansion plans.

‘Communities that have lived under the cloud of expansion for decades must be given proper reprieve from the threat of destruction and increased noise and air pollution.’

Mr Holland-Kaye clarified to the committee that the airport was still pursuing its appeal against the Court of Appeal’s decision in February.

According to the judgement, the government’s policy statement on the project did not take into account its commitment to the Paris climate accords signed in 2016.

Last week the airport said all expansion plans would be pushed back by at least two years due to the disruption caused by the virus.

It comes as it emerged Heathrow passengers will have their temperatures checked by heat-seeking cameras as part of new measures to control the spread of the virus.

Trials of the facial recognition technology will take place in the immigration hall at Terminal 2 within the next two weeks before a potential airport-wide rollout, bosses have said.

They will also consider trials of ‘contactless’ security screening and UV lighting to cleanse security trays.

The airport is in talks with Border Force and Public Health England (PHE) over what action can be taken if a passenger with a fever is identified, but they could be asked to quarantine or prevented from boarding planes.

The trials have been set up to ensure the technology works before proper regulations are drawn up. 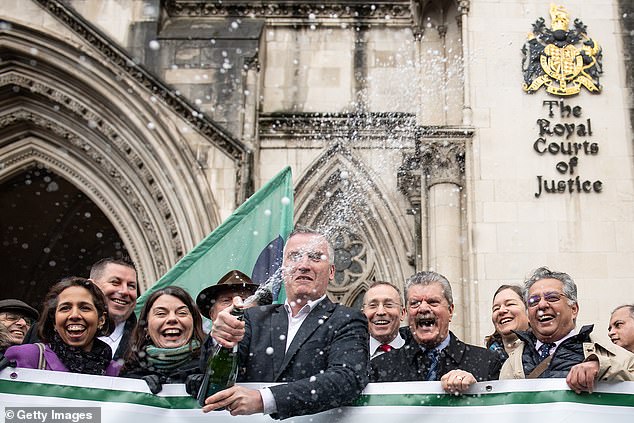 Heathrow’s expansion plans were already in question after a Court of Appeal ruling in February in which judges said the project was illegal. Protesters are pictured reacting to the ruling

It follows anger over the UK’s failure to screen passengers. Critics say the lack of stringent checks makes a mockery of the lockdown and threatens the health of the nation.

Whereas most countries around the world have introduced screening at airports, there are no tests whatsoever on the 15,000 passengers continuing to arrive into Britain every day.

Earlier this week, it emerged that fewer than 300 people arriving into the UK were quarantined in the weeks leading up to the lockdown. Meanwhile, evidence shows that an influx of travellers from virus-ravaged Italy and Spain over the Spring half-term break could have worsened the outbreak. 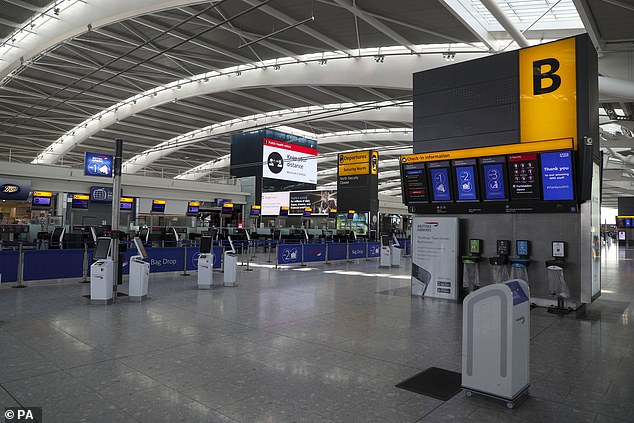 The announcement of trials at Britain’s busiest airport will lead to questions over why screening measures weren’t introduced when the virus first took hold months ago.

This could include a ban on elderly people entering airports, until a vaccine is found, as well as a requirement that travellers carry health passports proving they are medically fit.

Mr Holland-Kaye said yesterday: ‘Aviation is the cornerstone of the UK economy, and to restart the economy the Government needs to help restart aviation. 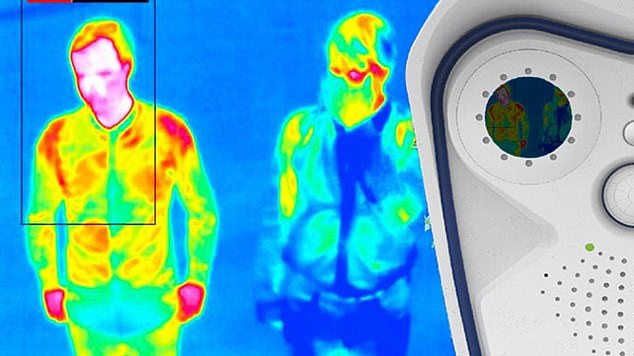 Heathrow released an image today showing how the thermal screening technology works. It  involves using a camera detection system to monitor the temperatures of passengers

‘The UK has the world’s third-largest aviation sector, offering the platform for the Government to take a lead in agreeing a common international standard for aviation health with our main trading partners.

‘This standard is key to minimising transmission of Covid-19 across borders, and the technology we are trialling at Heathrow could be part of the solution.’

Data from the Heathrow trials will be shared with the Government, which has faced criticism over its lack of engagement with the stricken aviation industry.

Giving evidence before the Commons transport committee, Mr Holland-Kaye yesterday revealed he has not spoken to Transport Secretary Grant Shapps since the outbreak of the virus, although he has been in regular contact with the aviation minister. 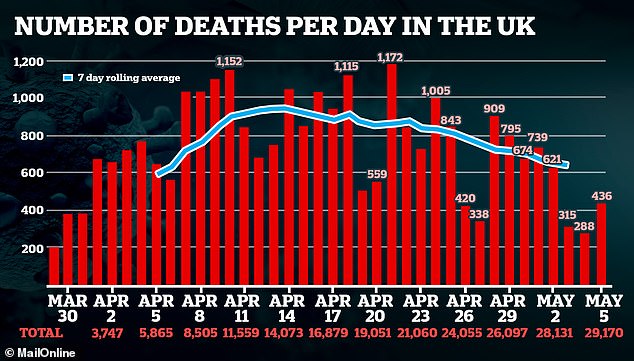 Ministers are said to be accepting the need for long-term screening measures to control the spread of coronavirus.

Last week, Transport Secretary Grant Shapps said he is ‘actively looking at’ proposals to quarantine all visitors to the UK for two weeks after arrival.

However, industry leaders have warned that could devastate the travel industry and there are also major questions over how it would be enforced.

Plan to reduce the virus risk on planes are also being considered by some airlines, with easyJet saying it could keep middle seats free to enable social distancing between passengers.