Emmanuel Macron has been egged by a protester shouting, ‘Vive la revolution,’ during a visit to Lyon to promote French gastronomy.

The president was greeting supporters on Monday when the egg struck him on the left shoulder and bounced onto his cheek, remaining intact.

Macron flinched as a bodyguard quickly pulled him back and another placed a hand in front of the president’s face to prevent any further incoming fire.

‘If he has something to tell me, let him come,’ the head of state said after the culprit was dragged away by the secret service.

‘I’ll talk to him after. Go get him,’ Macron told his bodyguards. 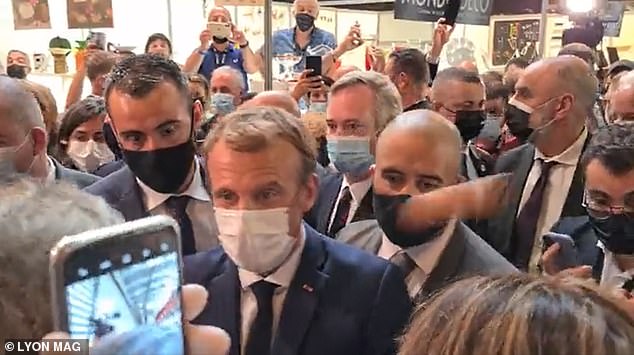 The egg is seen flying through the air shortly before it bounces off Macron’s shoulder. The assailant shouted ‘Vive la revolution’ as the egg was thrown 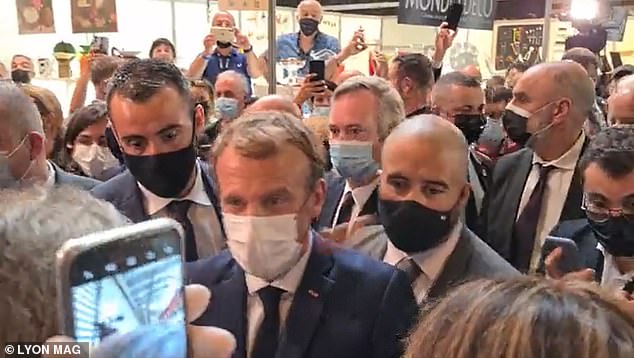 The egg bounced off his shoulder and onto his cheek, remaining intact, before it fell to the ground 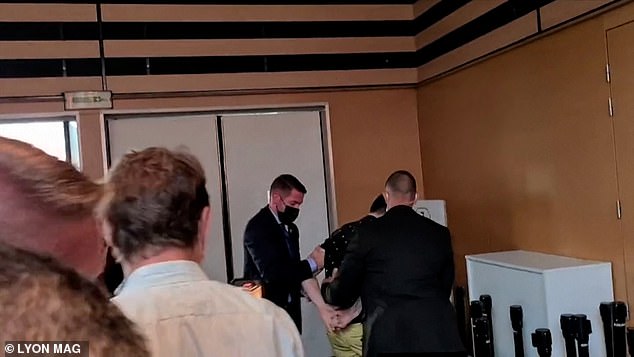 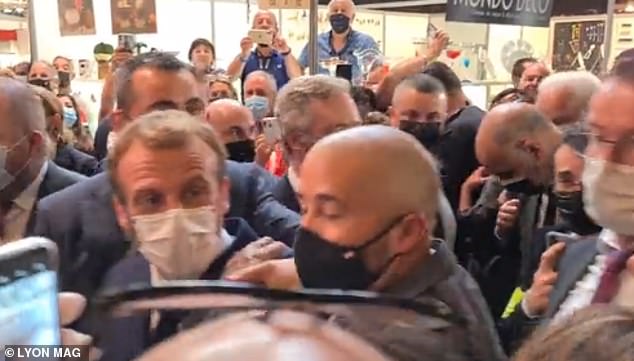 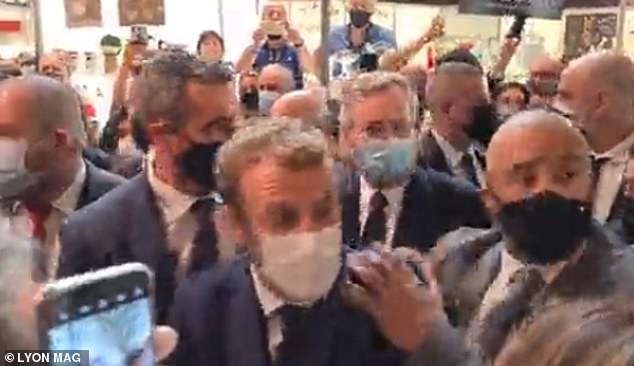 ‘If he has something to tell me, let him come,’ the head of state said afterwards

Although the egg did not break on impact it was not hard-boiled, with further images showing it broken on the ground.

Macron had been chatting to supporters while attending the International Catering and Hospitality Fair (Sirha) where he received an otherwise a fond reception.

A spokeswoman for the president did not answer a request for comment.

The attack comes just months after Macron was slapped across the face while on a walkabout in southern France.

Damien Tarel, 28, was sentenced to 18 months in prison in June after striking the president while he was greeting voters in the village of Tain-l’Hermitage.

The Medieval role-playing ‘geek’ who lived with his mother remained unrepentant as he was jailed, saying that Macron represented ‘France’s decay.’

Macron attempted to play it down as an isolated incident at the time as it came at the beginning of a ‘Tour de Frace’ to assess the mood of the nation.

The President is gearing up for a fierce campaign ahead of the presidential election in April, with Marine Le Pen his main rival in the polls.

A poll of polls compiled by Politico has Macron taking 24 per cent of the vote, while Ms Le Pen lurks just behind on 23 per cent and right-wing Xavier Bertrand trails them both on 17 per cent.

These numbers would mean that Macron and Le Pen would then continue onto a deciding vote as they did in 2017.

Many experts believe that, once again, France would back Macron given the choice of Le Pen.

However, his approval rating has been dented by the pandemic and had already been falling, with massive Yellow Vest protests gripping the nation in 2018. 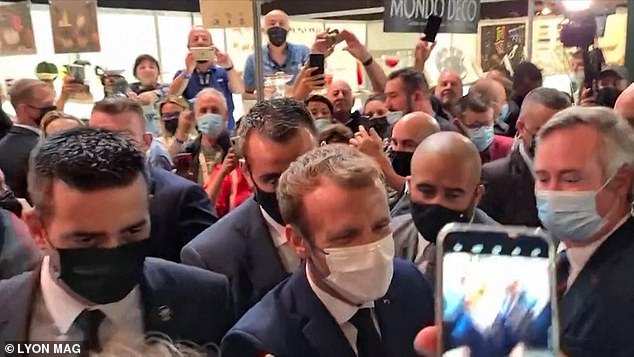 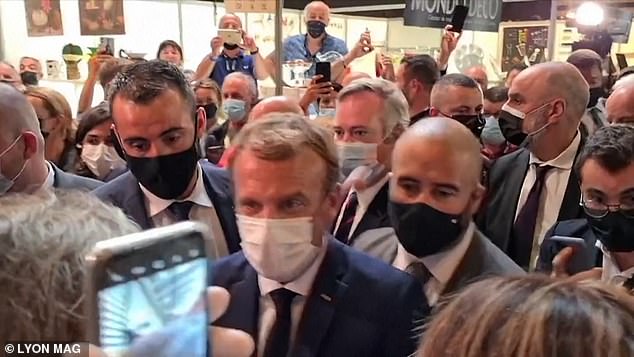 Public dissatisfaction has been compounded by his bungled vaccine programme, that saw him brazenly claiming the AstraZeneca jab was only ‘quasi-effective’ before quickly backtracking amid poor uptake among the sceptical public.

Impatience with the president has been fuelled not just by the glacial vaccine roll-out but also by his apparent contradictions of scientific advice, with rivals referring to him as a ‘Napoleon’ and accusing the president of believing that he is an epidemiologist.

Adding to his woes, voting intentions for Le Pen’s party have not been this positive since her father Jean-Marie Le Pen’s campaign in 2002, when he reached the second round of the presidential election.

The right-wing party is ranking ahead of any other party in France among the 25-34 age group, who have faced unemployment and soaring costs of student loans.

Many of the younger age groups had already turned against Macron in the Yellow Vest protests of 2018, the pandemic only hardening their positions.