The arguments for restricting our daily life to fight Covid were first put forward in March 2020. They were powerful and convincing and backed by respected experts. This has happened several times since, as we have undergone various lockdowns and circuit-breakers.

This is as it should be. Governments are there to take action and when the action is dangerous or costly, they have a duty to be as sure as they can that the policy is justified.

Of course, we expect them sometimes to take risks, to act fast rather than to dither. They also have a duty to support research, and the development of the Covid vaccine may well be the greatest single action for which Boris Johnson can take credit. 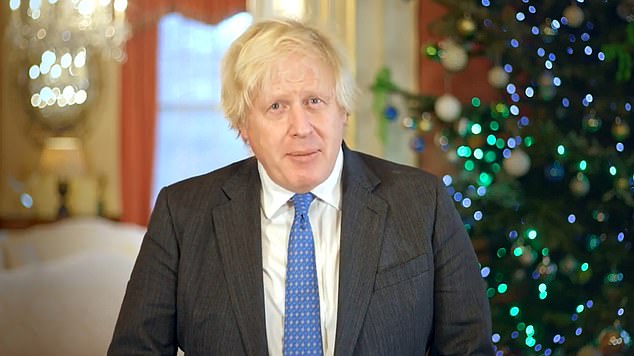 And on this basis The Mail on Sunday has, in general, supported the Covid policies followed by Mr Johnson. Equally importantly, we have supported the Chancellor, Rishi Sunak, in his similarly radical moves.

His measures were very expensive and their effects on taxation and inflation were predictable and are already evident. But they had to be taken, for the sake of millions of jobs and thousands of businesses, and we can debate how to pay for them afterwards.

Now the Covid crisis has reached a new stage. From the moment that the Omicron variant appeared, there were suggestions it might be less dangerous than its forerunners, to those who caught it.

Evidence for this continues to grow, though it is still too early to be certain. Under those circumstances it is perfectly consistent for a responsible government to be cautious about unleashing any new lockdown.

Toughness and resolution are not always shown by severe action. The truly wise leader knows when to stay his hand, as well as when to act, and changes his mind when the facts change.

The BBC is silencing the viewers who should be heard

The BBC’s existence is an attempt to answer a series of linked riddles. How can you sustain a national broadcaster to pursue the best in everything, free from commercial pressure?

How can the state collect the funds for such a body, without turning it into a lapdog of the ruling party? How can such a corporation be regulated to ensure impartiality?

Once, the BBC contained so many men and women who profoundly believed in its mission that this task was easier and governments worried about it less.

But since the 1960s, a growing number of BBC personnel have decided these high principles do not apply to them. If nobody stops them, they turn the Corporation into a megaphone for their largely Left-wing opinions.

And, increasingly, nobody does stop them. The public have noticed and so they turn to the BBC’s own complaints system in the hope of having some influence. But as we report today, that system is more or less useless. Its supposed backstop is the quango Ofcom, crammed with ex-BBC staffers and marinated in the same ideas.

And the first stage of the complaints procedure itself is just a sort of spongy layer, outsourced to the service company Capita, apparently designed to soak up and ignore public discontent.

As we report today, only a tiny number of complaints – roughly one in a thousand – ever reach the real complaints department, the grandly named Executive Complaints Unit. Most viewers almost certainly do not know how to get their grievances past Capita’s software. This is a mockery of the licence-payer.

Whatever the right answer is to the BBC’s complaints, this is the wrong one. Culture Secretary Nadine Dorries is correct to be worried and should act swiftly to ensure the voice of the viewers is actually heard in the Corporation’s sequestered corridors.