Victorian Premier Daniel Andrews is due to address the media shortly.

‘We will take all actions that we can to stop this’: Victoria’s top police officer

Chief Commissioner of Police Shane Patton said he understood Victorians were tired of lockdowns, but rioting was not the answer.

“I certainly understand that people are fatigued, they’re tired, they have got grievances and they’re frustrated, but now is not the time for protest,” he said.

“The Chief Health Officer is still determined that there are guidelines in place that prohibit mass gatherings, large gatherings and groups of people and the risk of the spread of the coronavirus is quite real in those gatherings.

“So we will do everything we can to stop the gatherings in compliance with the chief health officer guidelines. We don’t get to pick and choose the laws we enforce.

“I’d simply say this – I would implore, I plead, I’d ask, any other word that I can use, to say to people who are contemplating coming in here today to protest – do not do so. You’re not going to be welcomed with open arms, I can assure you of that.

“I’m not going to step through the amount of police that we’re going to have on deck today, I’m not going to talk about what our tactics are save to say that those tactics will be different and we have significant police numbers.”

Protests a ‘slap in the face’ for Victorian community: Police Minister

Victoria’s Police Minister Lisa Neville has described yesterday’s protesters as “thugs” and thanked the 500 or so officers who were deployed to keep the community safe.

“Every single one of [those Victoria Police members] over the last few days have been out dealing with violent, unacceptable behaviour from a number of, you know, thugs … that have sought to cause harm, cause injury to the community and cause injury to our police officers,” Ms Neville said.

She said three police officers were injured during yesterday’s riots. 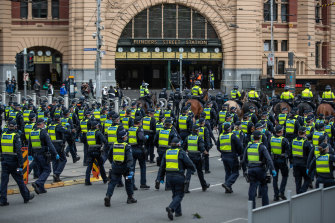 “That’s just unacceptable. Our police officers turn up to work, they should be able to feel safe.

“It’s a real slap in the face to the Victorian community who have been doing it very tough. I mean, every police officer wants … the lockdown to be over as well.

“So we have got to work together so that we cannot see this sort of behaviour again.”

‘They are there for a fight’: Andrews says rioters don’t reflect building industry

Victorian Premier Daniel Andrews has kicked off an early press conference today to address the “ugly scenes” that shut down city streets yesterday.

“I think there were some people there who you would say were from the building industry,” he said.

“There were others who were not from the building industry. They’re not there to protest, they’re there for a fight. They need to pretend to be protesting. They’re from many different backgrounds.” 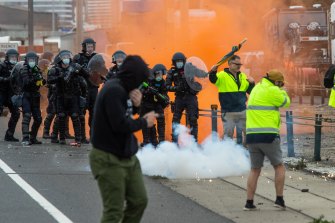 Protesters in the CBD yesterday.Credit:Jason South

“They’re fine people, hardworking people, and what we saw yesterday is an insult, an insult, to the vast, vast majority of tradies or people in the building industry who are not about wrecking, they’re about building.

“Yesterday we saw 1000, 2000 people, many of whom behaved appallingly. They did not reflect and should not be seen to reflect an entire industry.”

The government shutdown of Victoria’s construction industry has prompted one of the largest protests staged in Australia since the start of the pandemic, with frustrated labourers, libertarian activists and anti-vaxxers occupying Melbourne’s streets and clashing intermittently with riot police.

The meandering, day-long procession of up to 2000 people, mostly young men dressed in hoodies and high-vis jackets, provided an apt metaphor for being angry in lockdown – all steamed up and nowhere to go – as the mob marched through the city to the top of the West Gate Bridge and back again into a largely deserted CBD.

Organisers vowed to stage marches daily until construction workers are back on the job. Alongside calls to sack Victorian Premier Daniel Andrews, who on Monday ordered the entire industry to down tools for at least two weeks, protesters chanted “everyday, everyday”.

The decision to lock up all building sites, a position strongly pushed by Chief Health Officer Brett Sutton, was taken after it became clear that the industry would not reach its government-imposed deadline of vaccinating 90 per cent of construction workers with at least one jab by Thursday.

Good morning. The government shutdown of Victoria’s construction industry has prompted one of the largest protests staged in Australia since the start of the pandemic.

Organisers have vowed to stage marches daily until construction workers are back on the job, and we are here to offer rolling coverage of the protests throughout the day.

Here are some of the major headlines from yesterday: