A two-day food festival will take over the city to make up for Melbourne losing its New Year's Eve fireworks to the pandemic.

Lord mayor Sally Capp on Monday confirmed the annual fireworks would not go ahead in order to avoid large crowds congregating, with about 400,000 people flooding the city each year to watch the display. 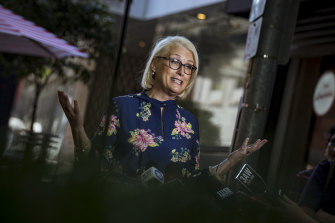 Instead the city will bring in 2021 by blocking traffic from busy food strips and encouraging outdoor dining for the one-off New Year Street Feasts, which is also aimed at helping hospitality venues recover from the city's extended lockdown.

More than 50 venues will take part at 11 precincts, including Little Bourke Street and Flinders Lane, for "European style" dining on December 31 and January 1.

The program will be available for pre-booked guests only, with bookings going on sale on November 23.

Cr Capp said she expected tens of thousands of diners to come into the city across the two days, but without drawing mass crowds at once.

"Of course, the scale of what is possible in a COVID world is quite different," Cr Capp said.

She acknowledged it was disappointing that the fireworks would not go ahead, but said the community could still come together to celebrate the end of a hard year.

"There are still so many things to celebrate in terms of the resilience and the way that we as a community have responded to the worst health crisis that we've experienced in our lifetime. But then that sense of saying hello to 2021, optimism, a brighter future," Cr Capp said.

The program – a joint initiative of the City of Melbourne, the state government and the Melbourne Food and Wine Festival – is part of the $100 million Melbourne City Recovery Fund and includes a $1 million investment from the council to manage street closures and crowds. 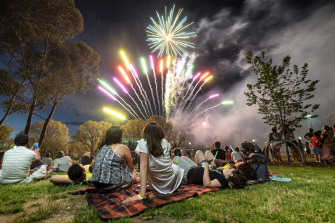 "Most importantly, it will add thousands of extra seats to restaurants over this period."

Bar Lourinha chef Matt McConnell hopes to seat another 50 diners on Little Collins Street during the two-day program, depending on density limits to be announced by Premier Daniel Andrews this Sunday.

The restaurant has already taken over parking spaces to seat outdoor diners as part of the "parklet" initiative.

"We've put together a menu for New Year's Eve, we'll be doing two sittings of a classic sit-down sharing feast style meal with some of our classic dishes," Mr McConnell said.

"Then on [New Year's Day] we're hosting a fantastic Portuguese style grill brunch, starting from 11 o'clock in the morning with some really, really beautiful fresh things to hopefully take care of the hangover from the night before."

"It's been beautiful, actually. It's like sharing your house open again. And the hospitality is warm, people are excited, they're out of their house, they're getting served. People, you know, I want a cocktail, who makes me a cocktail at home? Nobody. It's wonderful."