Dame Eleanor Laing, the Conservative MP for Epping forest, former Prime Minister, Theresa May and Mr Brokenshire’s former special advisor, Peter Cardwell, each did a reading to celebrate the late minister’s life and work – whilst others took to Twitter to pay their respects.

Caroline Nokes, Tory MP for Romsey and Southampton North, tweeted: ‘Such a lovely tribute to my colleague James Brokenshire today with his memorial service at St Margaret’s Westminster – he is much missed.’

‘A man of integrity and decency, dedicated to public service and the challenging work of peace and reconciliation. May he rest in everlasting peace.’

Nick Thomas -Symonds, the Shadow Secretary of State for International Trade and Welsh Labour, also wrote a touching tribute about the ‘kind’ MP who was ‘well respected across Parliament’ and said his thoughts were with Mr Brokenshire’s wife Cathy and three children, Sophie, Jemma, and Ben.

He said: ‘Such a moving service remembering James Brokenshire today. The eulogies captured James’ remarkable life of public service but also his dry humour and kindness that led to him being liked and respected across Parliament. My thoughts are with Cathy, Sophie, Jemma and Ben.’

Meanwhile, Sir Keir Starmer did not attend the memorial after the Labour leader made an extraordinary vow to resign if he is fined by police over Beergate this afternoon.

Mr Brokenshire – who was a Conservative minister for housing, security and Northern Ireland under David Cameron and Theresa May until he was sacked by Mr Johnson in 2019 – passed away aged 53 on October 7 at Darent Valley Hospital in Dartford, close to his Old Bexley and Sidcup constituency. 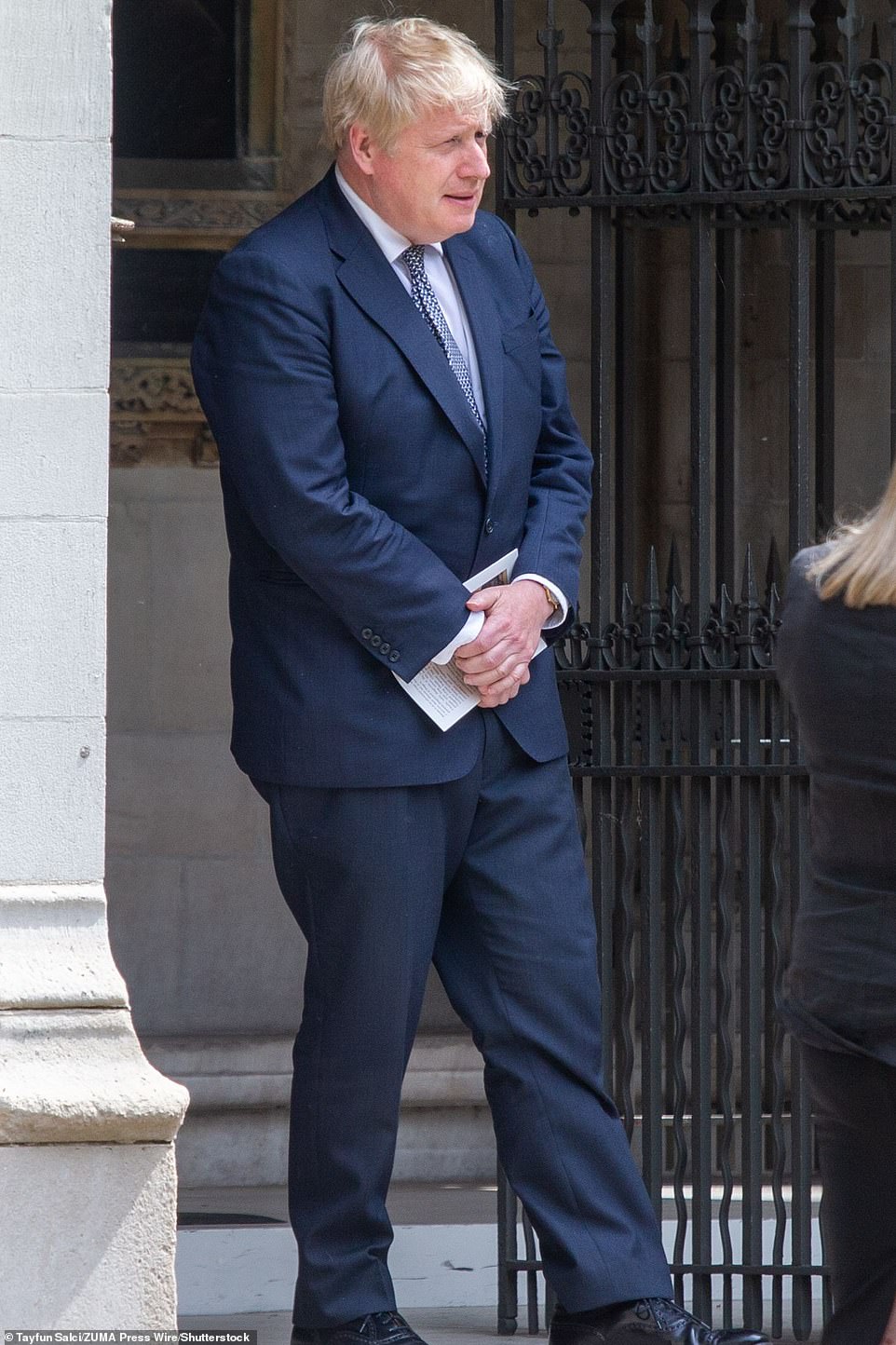 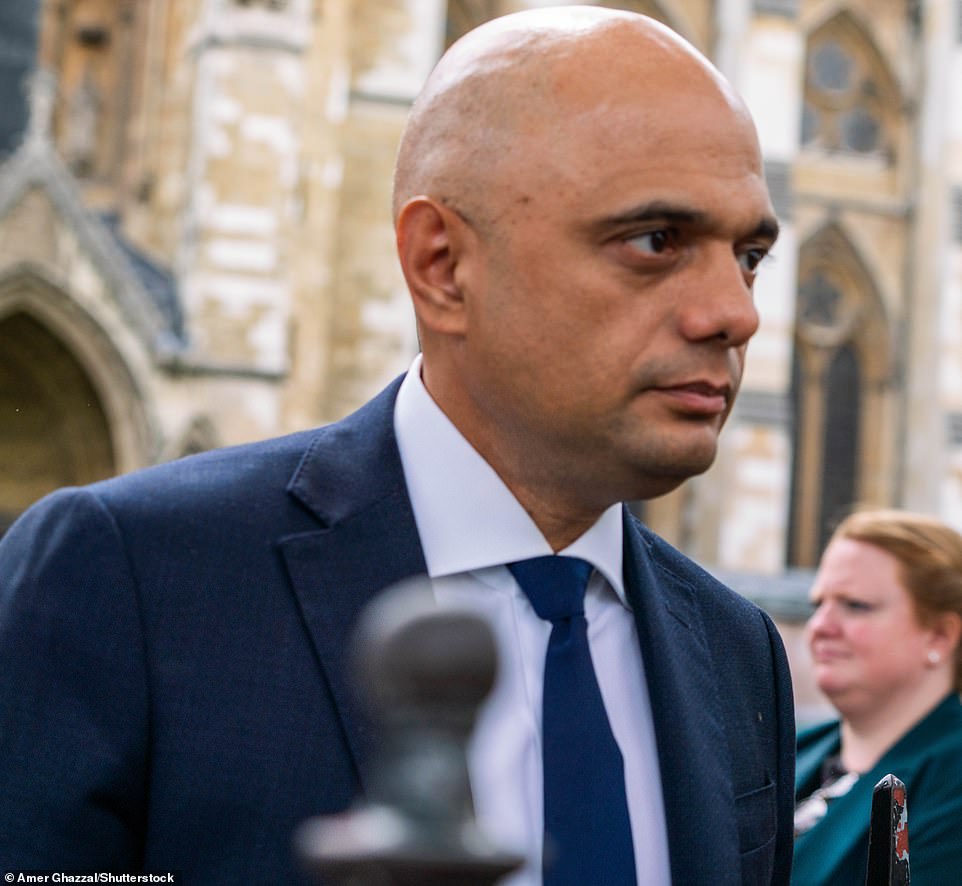 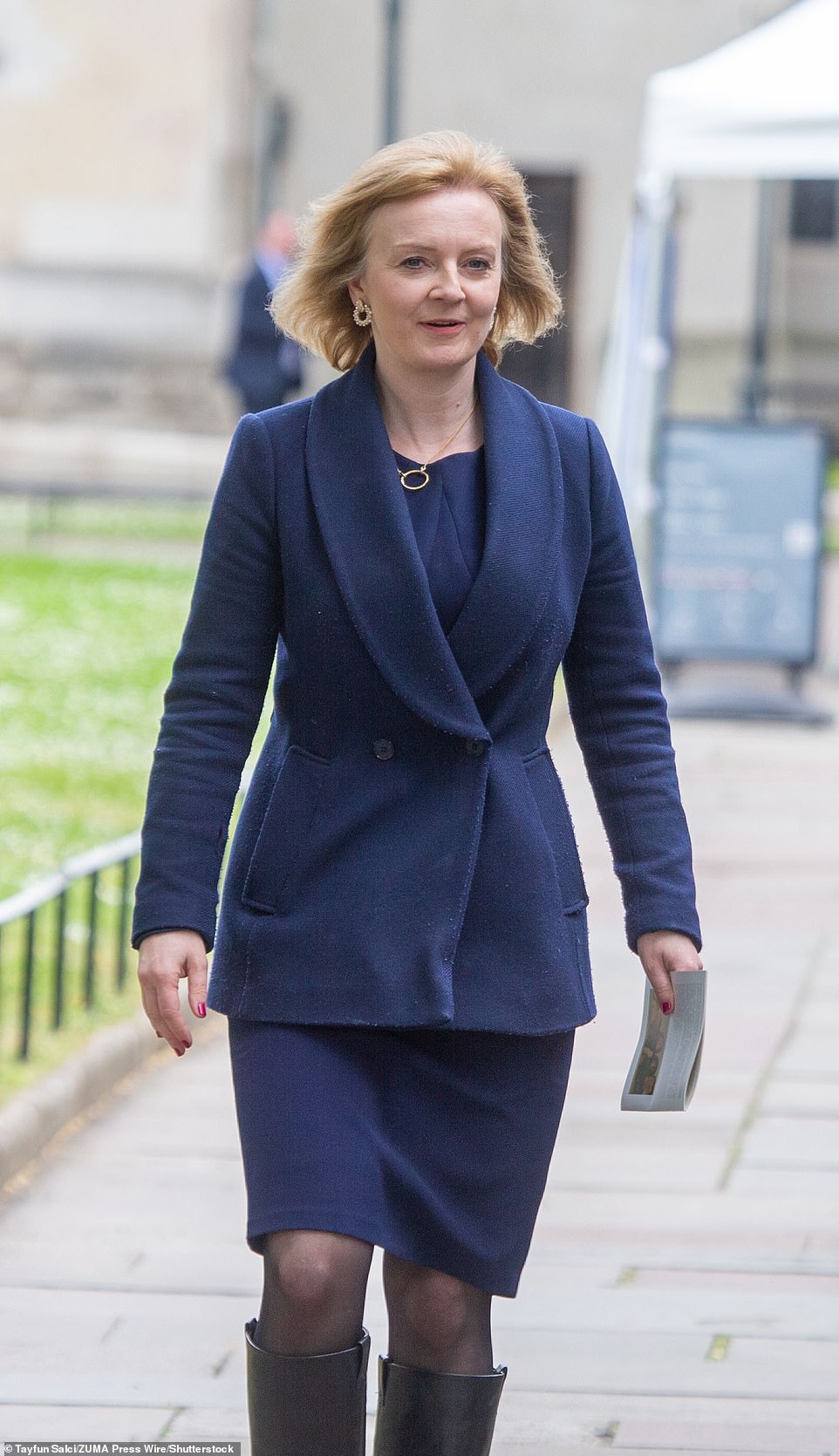 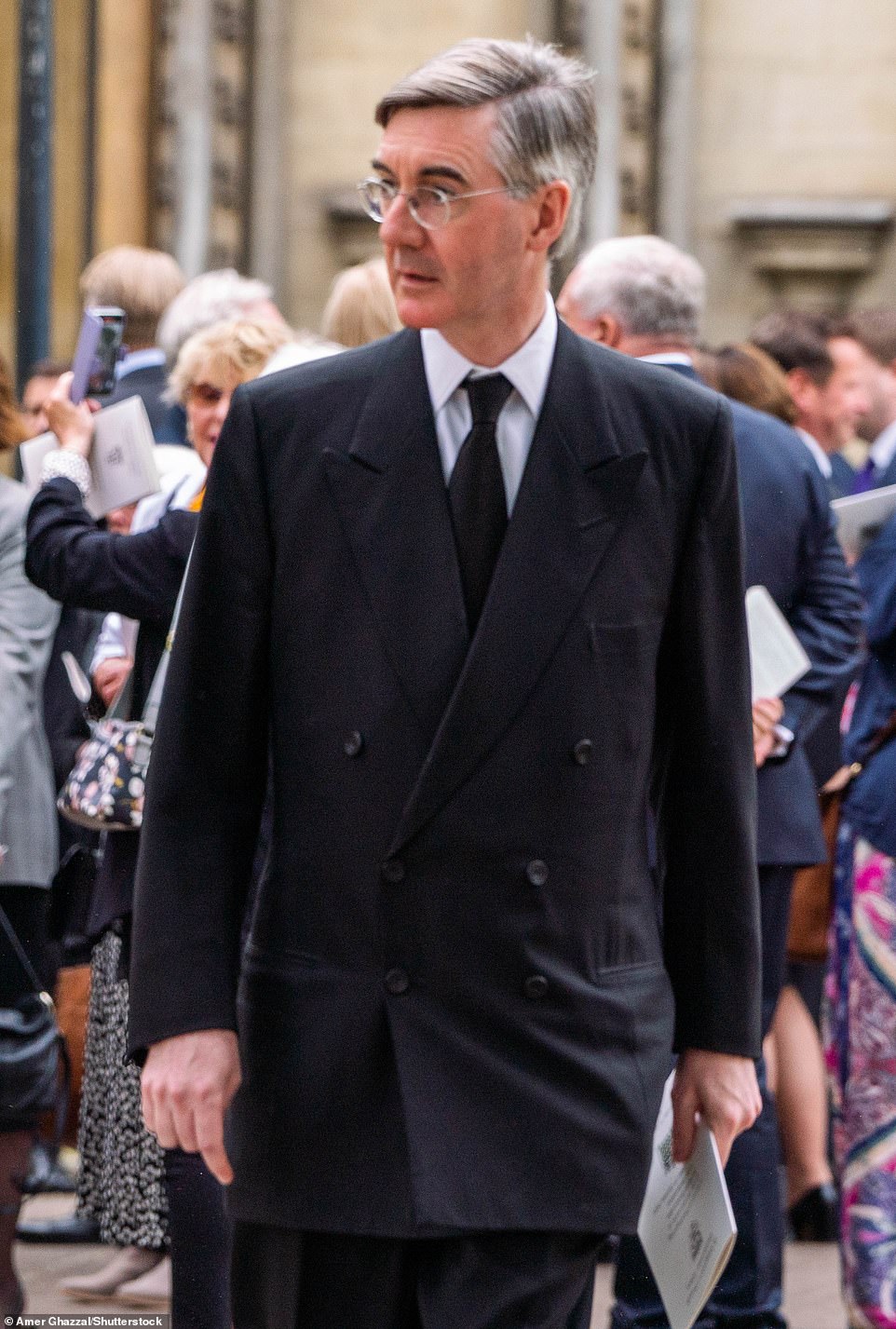 Mr Brokenshire – who was a Conservative minister for housing, security and Northern Ireland under David Cameron and Theresa May until he was sacked by Mr Johnson in 2019 – passed away age 53 on October 7 at Darent Valley Hospital in Dartford, close to his Old Bexley and Sidcup constituency. Pictured: The Minister of State for Brexit Opportunities and Government Efficiency Jacob Rees-Mogg 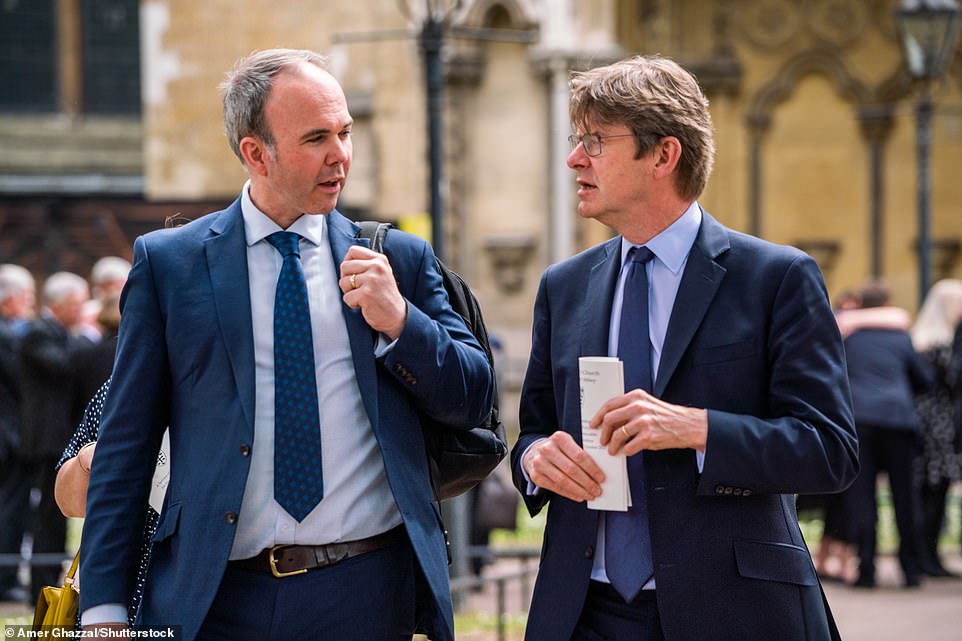 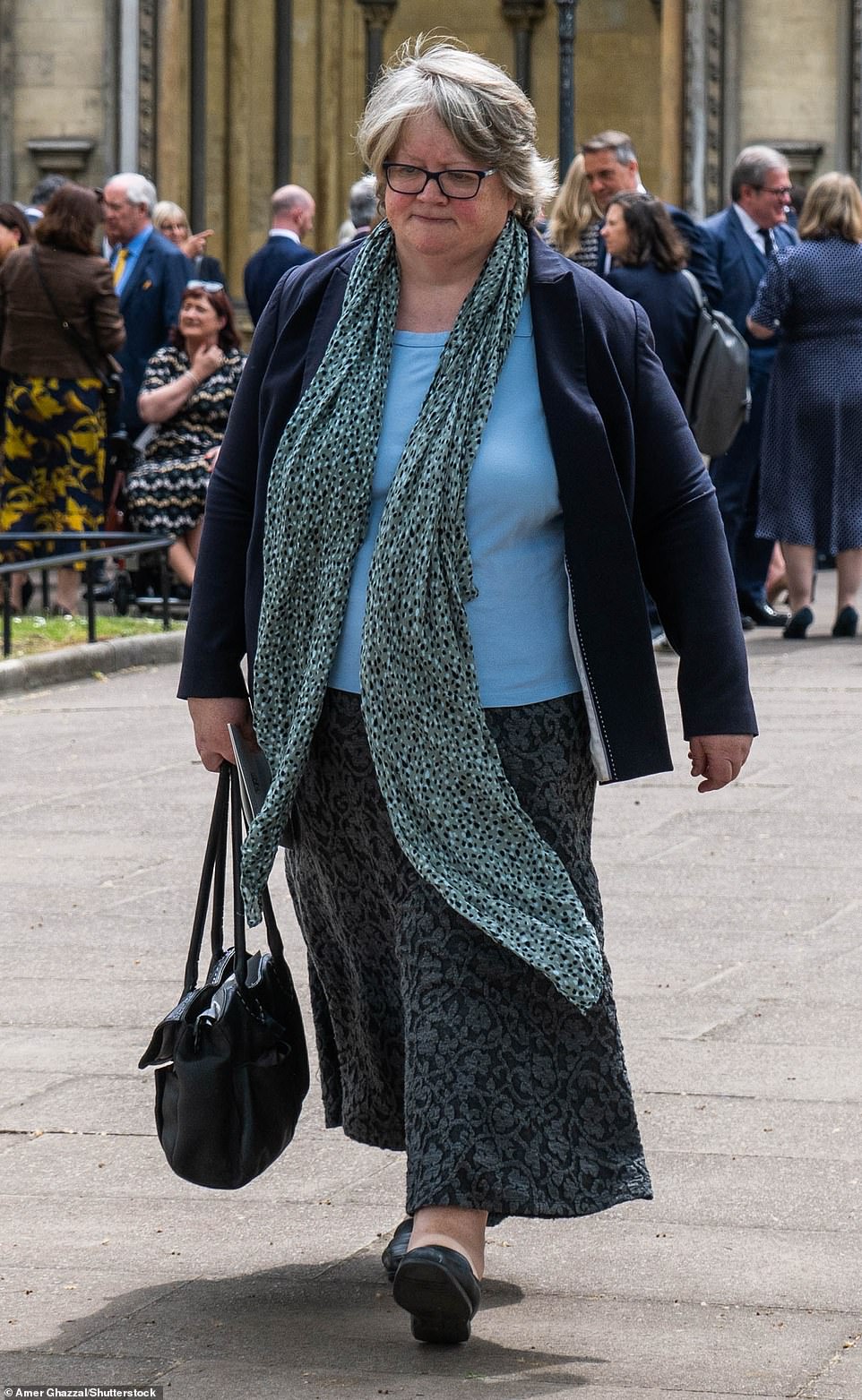 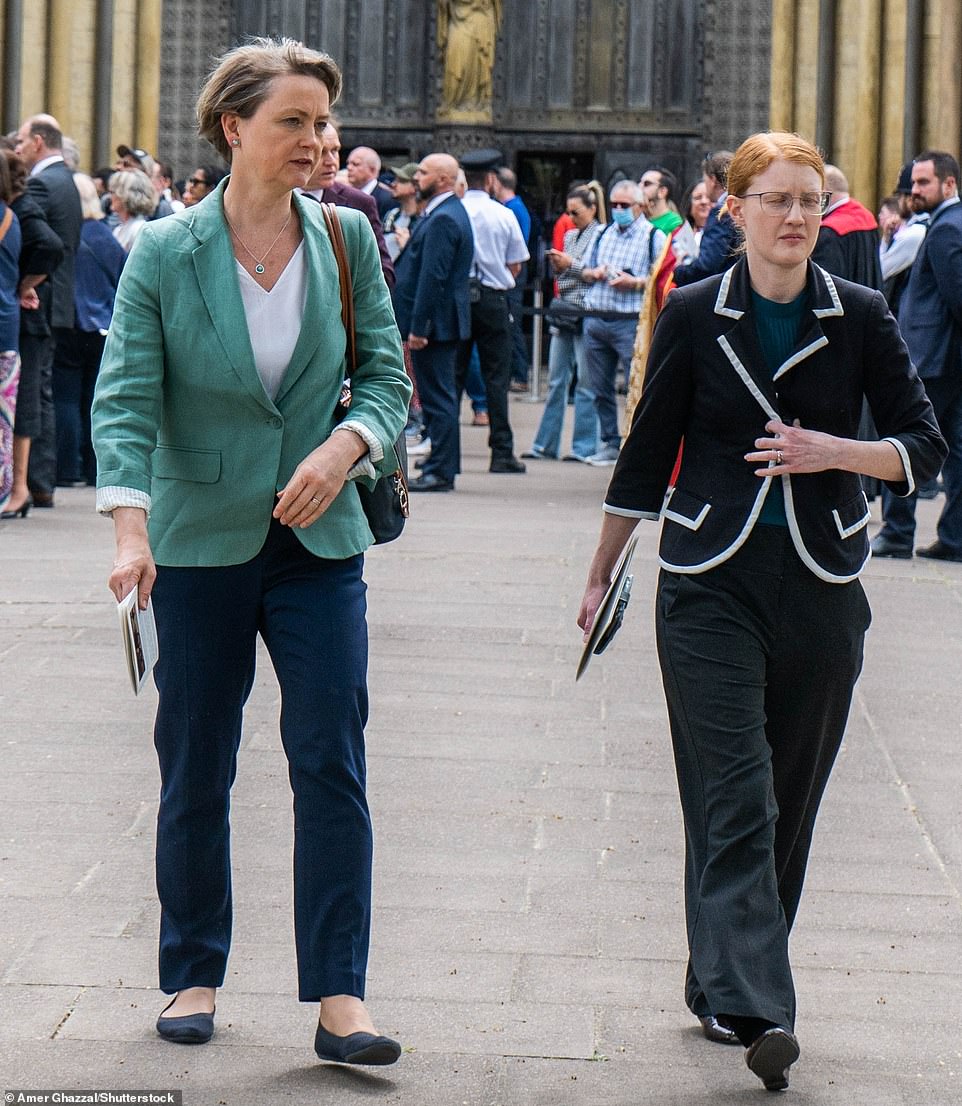 Mr Brokenshire, the Conservative MP for Old Bexley and Sidcup, who previously served as Northern Ireland secretary and security minister, announced he had been diagnosed with lung cancer in 2018 and had surgery to remove the upper lobe of his right lung.

At the time, non-smoker Mr Brokenshire said he had been prompted to see his GP after coughing up a small amount of blood.

He became vocal in calling for national screening for lung cancer, and in April 2018 used a debate in Parliament to call for a national programme to improve poor survival rates.

Mr Brokenshire said much stigma surrounds lung cancer, with many people incorrectly believing it is only caused by smoking.

In August last year he posted a heartbreaking tweet saying his ‘cancer had progressed’, along with a photo of him with his wife Cathy. 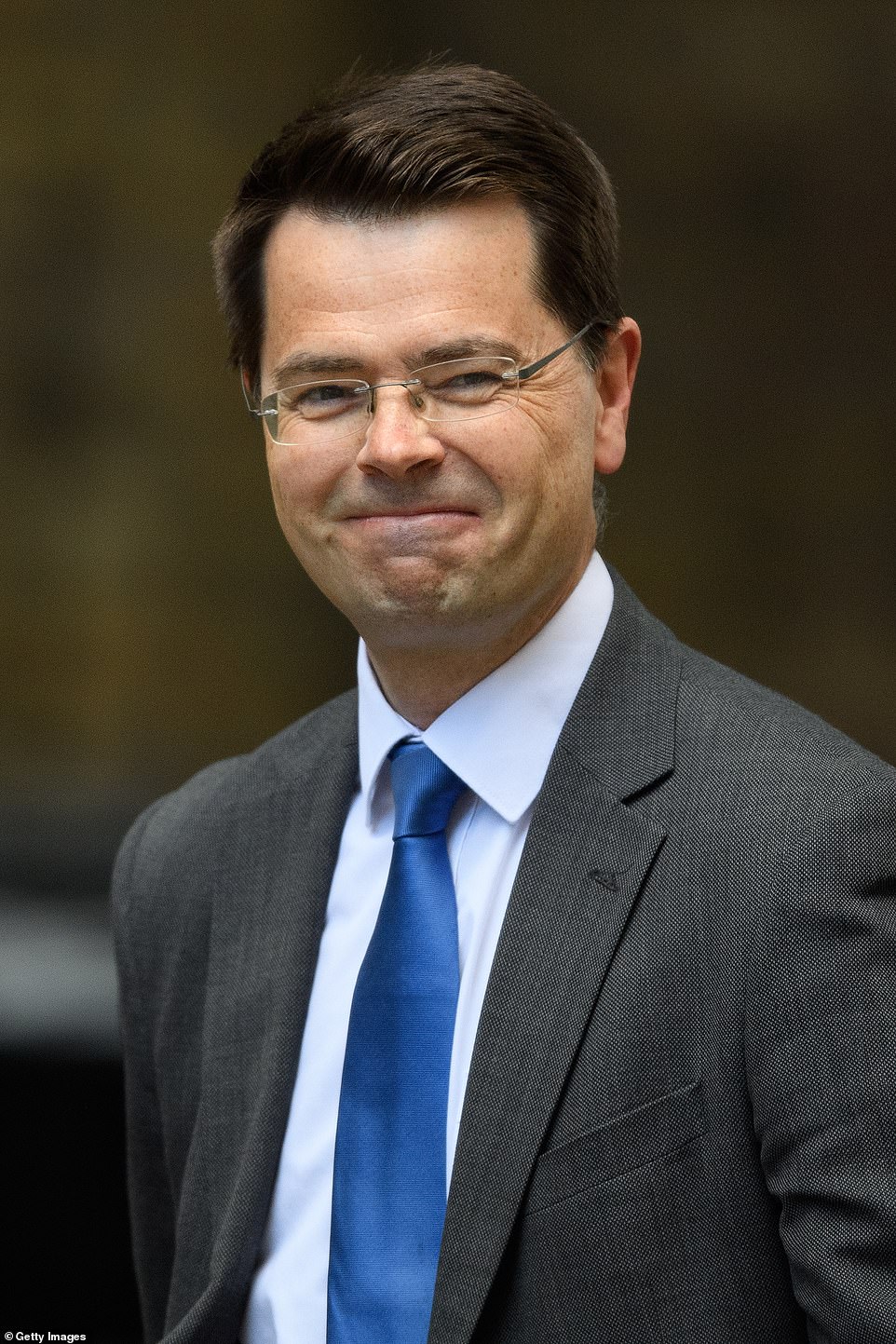 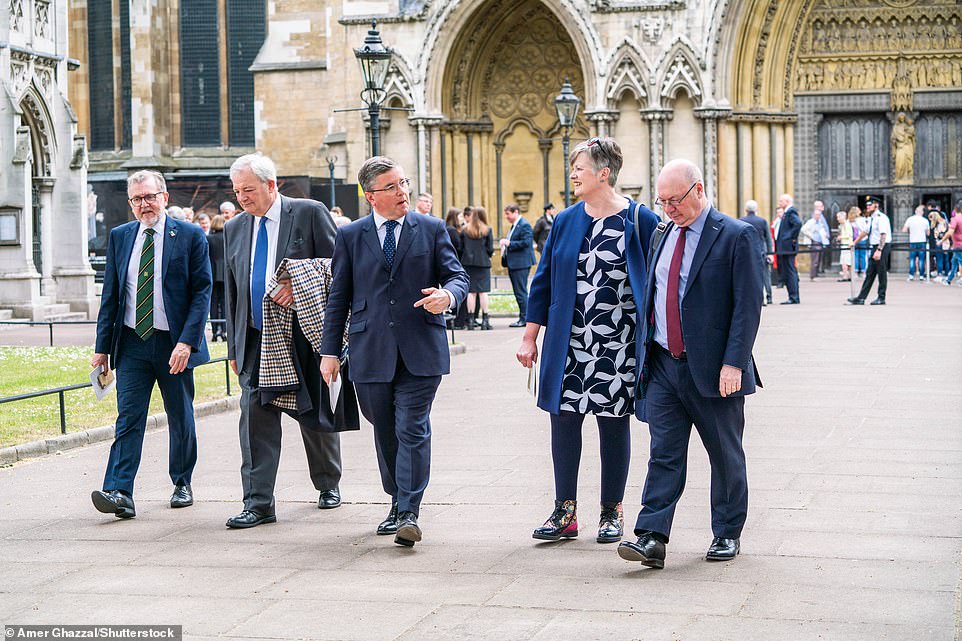 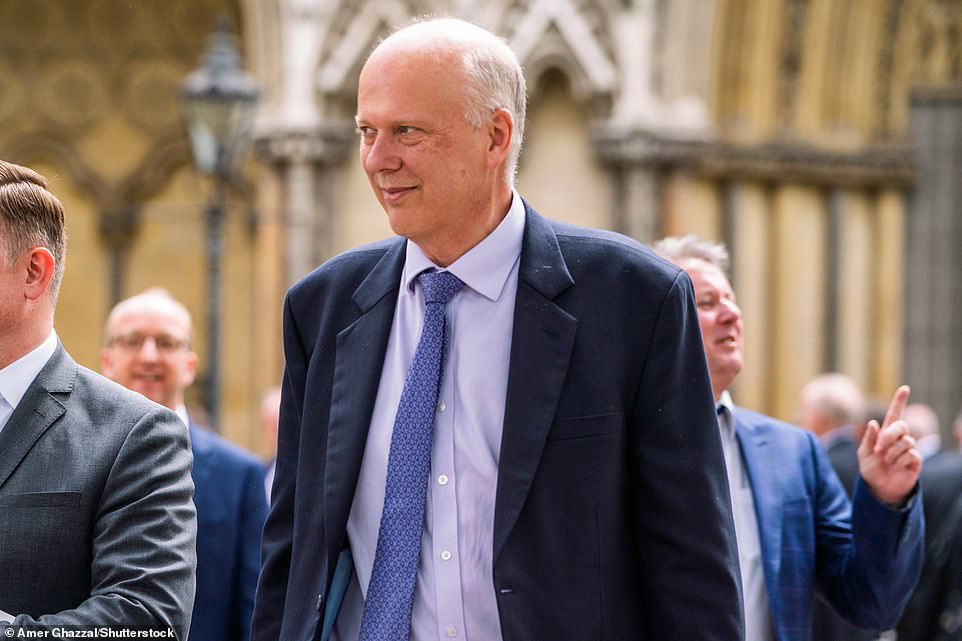 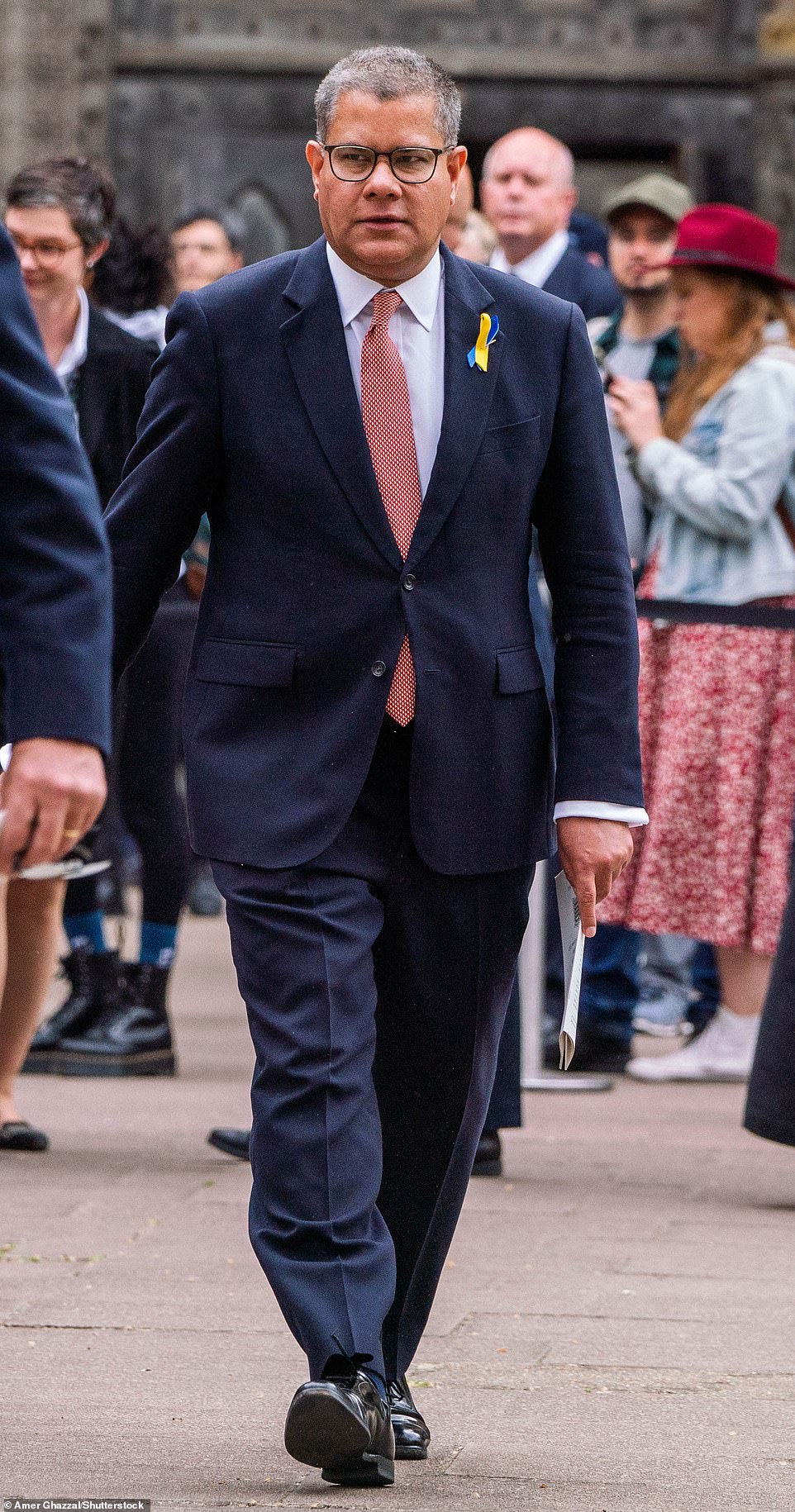 Alok Sharma, President for COP26 and Minister of State at the Cabinet Office, was pictured leaving St Margaret’s church in Westminster this afternoon

The Old Bexley and Sidcup MP stood down as security minister last July to focus on his health after a recurrence of his illness.

But in a statement his family announced that he had died in hospital with his family by his side after a sudden deterioration in his condition last October.

In a statement, James Brokenshire’s family said: ‘James died peacefully at Darent Valley Hospital with family members by his bedside. He had been in hospital since Sunday after his condition rapidly deteriorated.

‘James was not only a brilliant Government minister as both Security and Immigration Minister at the Home Office and Secretary of State at the Northern Ireland Office and Ministry for Housing, Communities & Local Government, but a dedicated constituency MP, first for Hornchurch from 2005 to 2010, and then for Old Bexley & Sidcup for the past 11 years. 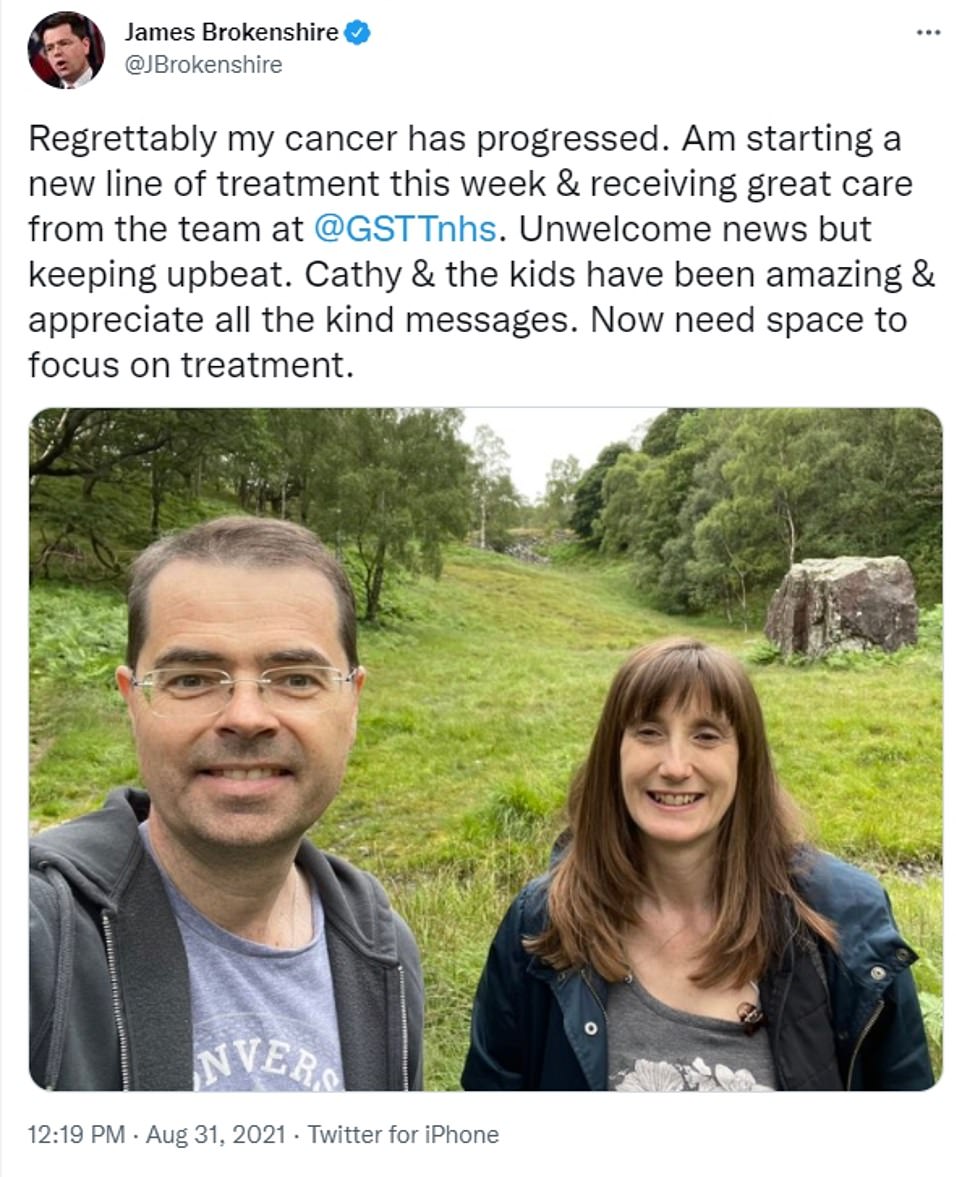 In his last tweet on August 31, Mr Brokenshire shared a picture of himself on a walk with his ‘amazing’ wife Cathy, and said that his lung cancer had ‘progressed’. He died in October 2021 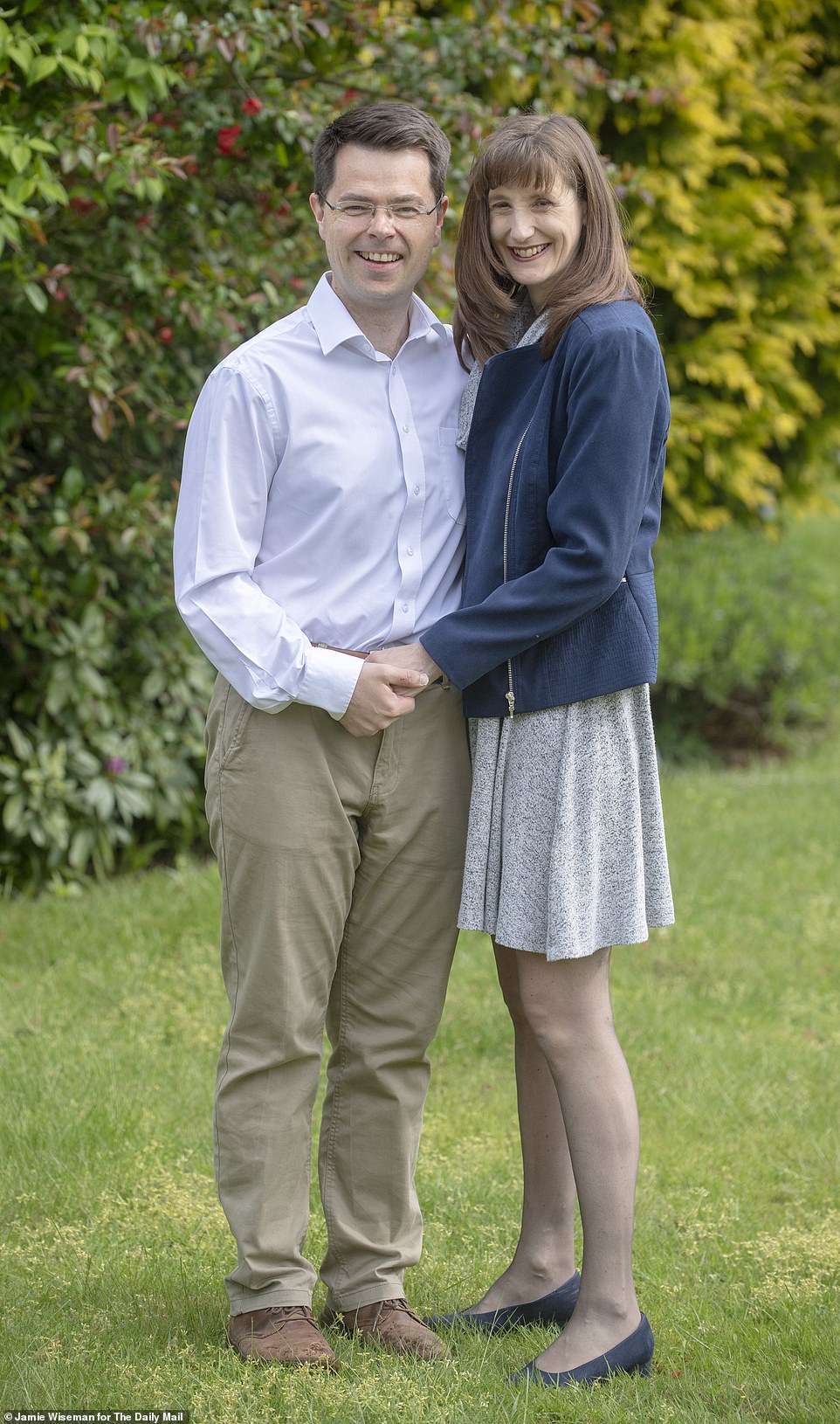 Mr Brokenshire, pictured with wife Cathy, stepped down as Northern Ireland secretary in January 2018 on his 50th birthday, after his cancer diagnosis

‘But most importantly, he was a loving father to his three children, a devoted husband to Cathy and a faithful friend to so many.

‘We would like to thank all the NHS staff, particularly those at Guy’s & St Thomas’ in London, who cared for James with such warmth, diligence and professionalism over the past three-and-a-half years.

‘We would also ask that our privacy as a family is respected at this time.’

Mr Brokenshire’s funeral was attended on October 21 by senior politicians, family and friends in Bexley and around St John the Evangelist Church.

Fellow Tory MP Sir David Amess – who was killed during a constituency surgery in Essex just a week after his colleague’s death – and his family were also remembered during prayers in the packed church.

Mr Brokenshire was described by Reverend Scott Lamb as ‘unassuming’ and the ‘most decent of men’.

Ex-PM Theresa May, in whose government Mr Brokenshire held two Cabinet roles, gave a Bible reading from Mark’s Gospel and, referring to the passage, Rev Lamb said Mr Brokenshire also ‘came not to be served but to serve’.