Met Office weather warnings for snow are already in place for much of the south of England and Wales today, where icy conditions could lead to treacherous journeys. The region has been hit by heavy rain in recent days, but the downpours will now turn to snow, adding further disruption. While much of the snow will cease by Monday evening into Tuesday, a new raft of warnings have been issued from 10am on Wednesday to 6am on Thursday.

The Met Office said: “An Atlantic frontal system looks likely to bring rain into parts of southwestern Britain on Wednesday.

“As this moves further east into colder air there is a chance of this rain turning to snow. The extent of any snow is very uncertain, but 2 to 5 cm could fall across a swathe of southern Wales, central and southern England, with a small chance of 10 to 15 cm settling in a few places, most likely on high ground above 200 metres.

“As the rain and snow clears on Wednesday night there is a risk of widespread ice forming on untreated surfaces.”

The yellow warning affects a huge area across the south of England and parts of southern Wales, reaching some areas of the midlands as well. 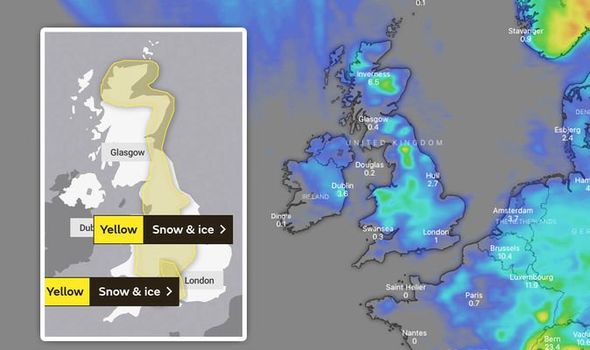 You can find a full list of areas affected at the bottom of this article.

The Met Office also warned there is a “small chance of disruption” from snow and ice, adding: “There is a slight chance that bus and train services may be delayed or cancelled, with some road closures and longer journey times.

“There is a small chance of travel delays on roads with some stranded vehicles and passengers, along with delayed or cancelled rail and air travel.”

The UK weather forecaster also warned parts of the affected area could see power cuts, with the potential for this to affect other services, such as mobile phone coverage.

The agency also urged people to stay safe when out and about, as surfaces may be slippy due to ice. 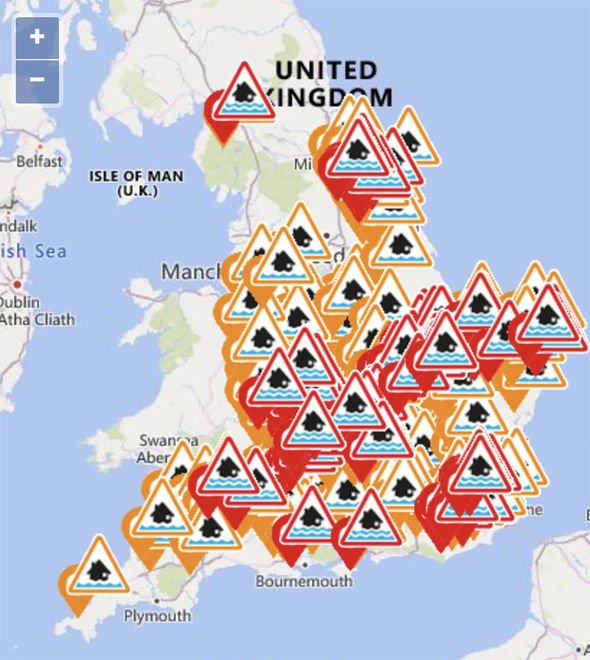 Britain has already been bombarded by wintry weather conditions over the last few days as a cold snap takes hold in the aftermath of Storm Bella.

The first warning, which is in place until 6pm tonight, read: “An area of rain is likely to move south through Sunday night and Monday across parts of England and Wales.

“There is the potential for this to turn to snow for a time. There is a lot of uncertainty in where snow develops with some areas seeing little or no accumulations.

“However, there is a very low likelihood of 1-3 cm, and locally 5-10 cm falling in a few places, particularly over higher ground of Wales above 200 metres.

“As well as snow, widespread ice may also be an issue, especially where treatment has been washed off road surfaces.”