BBC Weather: UK to be hit by 50mph gusts as temperatures drop

Freezing temperatures have led to a range of weather warnings for the UK in recent days, including snow, ice and rain. Now the Met Office has issued new ice warnings as the mercury is forecast to plummet overnight.

The Met Office writes: “Cloud is expected to clear this evening and overnight allowing temperatures to fall close to freezing which may lead to icy patches on untreated surfaces.

“A few showers are also expected across Kent and the far east of Essex, Suffolk and Norfolk which may lead to more widespread ice in these areas.”

The ice warnings are in place from 9pm tonight until 10am on Saturday.

The warning area is East Midlands, East of England, London and South East England, West Midlands and Yorkshire and Humber. 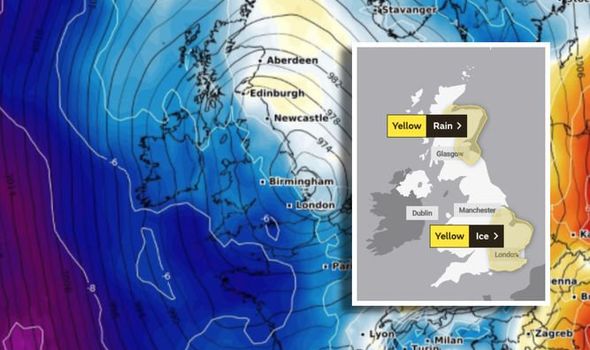 Already snow has covered much of the UK overnight, with Yorkshire and Scotland waking up to snow-covered roads and fields.

In Edinburgh, residents were woken by the huge thunderclaps of thundersnow in the early hours of Friday morning,.

Two “extraordinarily loud” thunder claps were heard in Edinburgh just before 5am.