The Met Office has issued swathes of rain and wind warnings for parts of Scotland, Northern Ireland and northern England on Tuesday and Wednesday. From 12pm on Tuesday, a Met Office amber rain warning covers areas within the Central, Tayside and Fife, SW Scotland, Lothian Borders and Strathclyde regions. The amber warnings expire at 12pm on Wednesday.

The Met Office warns as much as 120mm, or approximately five inches, of rain could fall in some areas under warning.

The Met Office amber warning reads: “A spell of persistent and often heavy rain will affect much of Scotland during Tuesday and Wednesday.

“Rainfall accumulations of 40 to 60 mm are expected quite widely across the warning area with a few places possibly seeing 80-120 mm in a 24 to 36 hour period, although there still remains some uncertainty in peak totals.

“Drier conditions will arrive from the west during the second half of Wednesday. Strong southerly winds are likely to accompany the rain.” 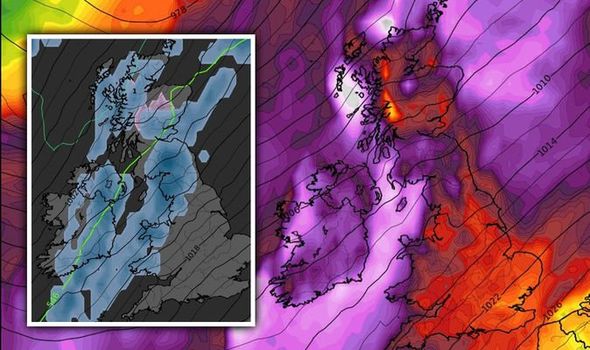 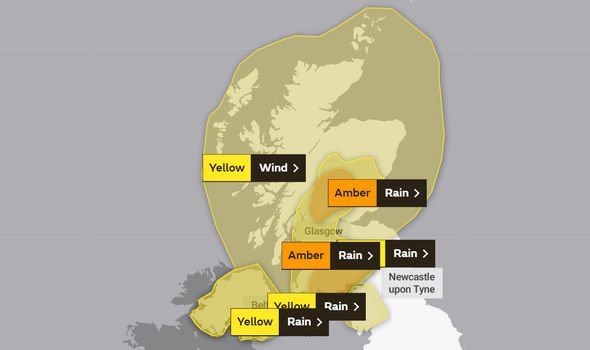 The amber rain warnings issued by the Met Office this week are in addition to several other yellow rain and wind warnings affecting Scotland and Northern Ireland this week.

Some areas could see winds as high as 70mph between 2am and 6pm on Tuesday.

The entirety of Northern Ireland is also included under the yellow wind warning.

The warning reads: “Strong south to south-westerly winds will gust 50-60mph at times, but there is the potential for gusts of 70mph for eastern coastal districts of Northern Ireland, the Western Isles and perhaps the Moray coast during the morning.

“Winds will ease across much of Northern Ireland and the north-western half of Scotland during the afternoon.”

From 3am until 11.59pm on Tuesday, the entirety of Northern Ireland is also under a yellow rain warning.

The Met Office warn up to an inch of rain (15-30mm) is expected widely, but accumulations of up to two inches (40-50mm) could be possible in a few places, mainly in the south.

The Mourne Mountains could see over 60mm, or approximately 2.5 inches, of rain accumulation.

This is a breaking story, refresh your browser for updates.