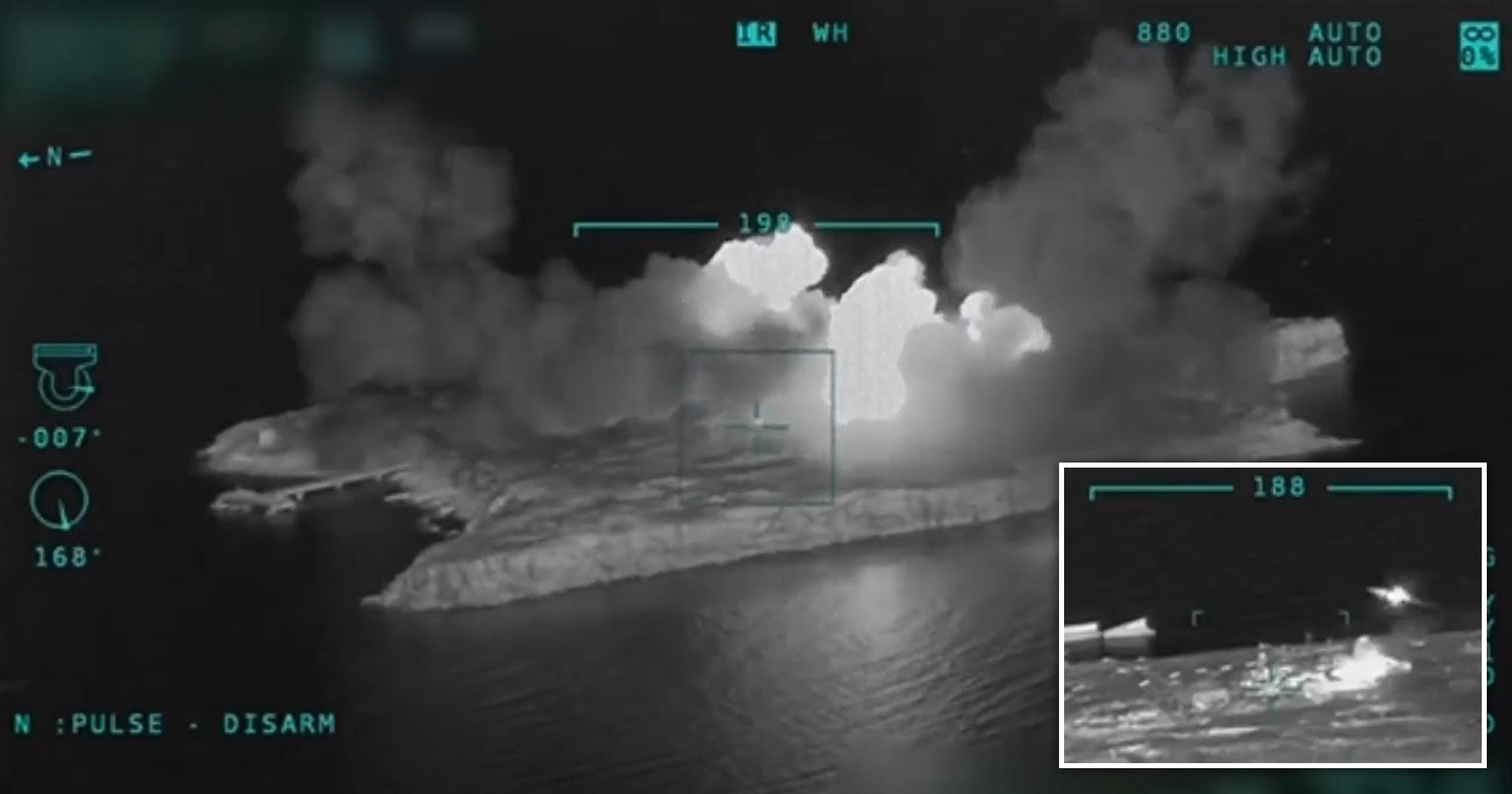 Ukraine says it has bombed Snake Island in an effort to stop Russia taking control of the Black Sea.

The location became infamous after Ukrainian guards and Russian invaders had a verbal run-in early on in the war.

Russia had demanded they surrender the island only for the guards to respond over loudspeaker on the tannoy: ‘Russian warship, go f*** yourself.’ The border guards were later taken captive.

But now video footage released by the Ukrainian military appears to show missiles being launched from Su-27 fighter jets at Russians who had taken the island.

A clip also shows a helicopter unloading troops being obliterated in another strike.

Satellite photos analysed by The Associated Press seem to confirm the island had been targeted.

An image taken on Sunday morning by Planet Labs PBC showed smoke rising from two sites on the island, seeming to back up what was seen in the footage.

On the island’s southern edge, fire could be seen smoking next to debris.

The Ukrainian military said it had struck a Russian helicopter that had flown to the island.

A Planet Labs image from Saturday had shown most of the island’s buildings, as well as what appeared to be a Serna-class landing craft against the island’s northern beach had been destroyed by Ukrainian drone attacks.

Ukraine also said it had sunk a Russian landing craft near the island.

Russia has not yet confirmed the strike.

But its defence ministry said on Sunday it had destroyed a Ukrainian navy ship near Odesa with a missile strike overnight.

The ministry said its missiles had hit a ‘Project 1241’ corvette, a class of Soviet missile corvettes with a NATO reporting name of Tarantul.

Russia’s air defences also shot down two Ukrainian SU-24 bombers and a Mi-24 helicopter over the Snake island in the Black Sea at night, the ministry claimed in a statement.

It said a total of four Ukrainian warplanes, four helicopters and an assault boat had been destroyed over the past 24 hours.

The report has not independently verified immediately and there was no immediate comment from Ukraine.

There have been a series of skirmishes around the island in recent days.

On Monday, a Ukrainian drone is said to have taken out two Russian patrol boats before Russian warship the Admiral Makarov was set on fire ‘after being hit by a Ukrainian missile’.

Russia-Ukraine war: Everything you need to know

Since Russia’s invasion of Ukraine began on February 24, the country has suffered widespread damages and loss of life amid a major bombing campaign.

Millions of people have fled the country, with thousands of British people opening up their homes to Ukrainian refugees.

During the course of the war, Ukraine’s President Volodymyr Zelensky has remained in Kyiv, despite the Ukrainian capital being subjected to a barrage of bombing.

Zelensky has continuously pushed for aid and support from world leaders, as well as pressing for fast-tracked NATO membership.

Meanwhile, Russia’s President Vladimir Putin has been widely condemned for his attack on Ukraine.

His actions have been met by harsh economic sanctions, bans from competing in major sporting events, and countries moving away from using Russian oil.

Get in touch with our news team by emailing us at [email protected].