A security guard was caught kicking and pushing a homeless man outside one of Westminster’s most popular pubs.

Shocking footage of the guard – wearing a florescent jacket with the logo of security regulator SIA – shows him boot the man outside the Red Lion pub on Whitehall, just yards from 10 Downing Street.

The man was said to have been asking people for money at the pub, before being followed down the street in the direction of Parliament Square at 8.30pm on May 31. 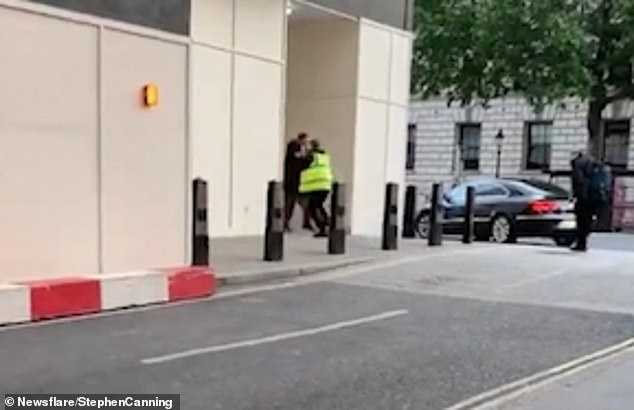 A rowdy clip shows the guard pursuing the beggar before kicking him in his right leg to the bemusement of watching punters.

They yell in uproar as the security guard then shoves the unnamed man into an alley and walks away.

Later footage from inside the passageway shows an exchange between the homeless man and security, while Essex Councillor Stephen Canning – a punter with a pint in hand – tries to break up the pair. 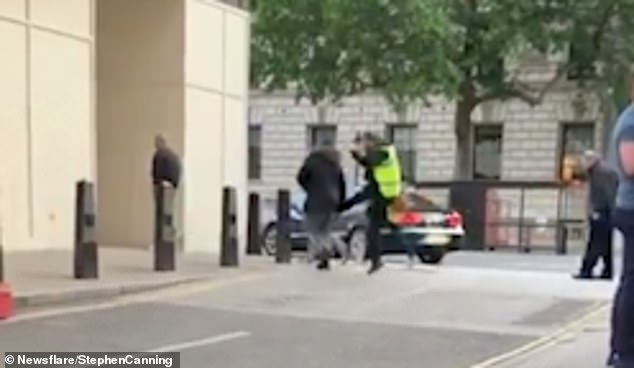 At this point, both men are loudly shouting, which is echoed by the walls surrounding the path.

Three spectators, who were by then involved, suggest the security guard – who was said by a a witness to be employed by a nearby pub – call the police and they walk away with him calmly.

But the homeless man tries to get the last word in as he screams: ‘And what? And what?’ 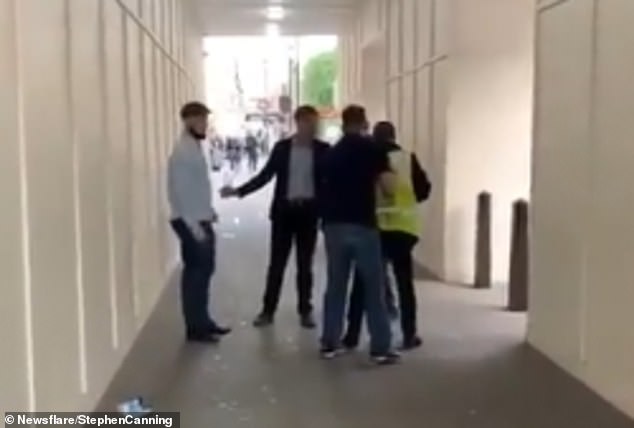 Councillor Canning posted the footage on Twitter, writing: ‘Homeless man just begging at the Red Lion by Parliament, their private security kicked him and attacked him… ⁦this ain’t okay…’

He posted frequent updates as the drama unfolded.

‘The police have arrived, the homeless man has left (he’s scared, understandably) and therefore @MetPolice tell us there is no victim and they can’t charge the security guard!’ 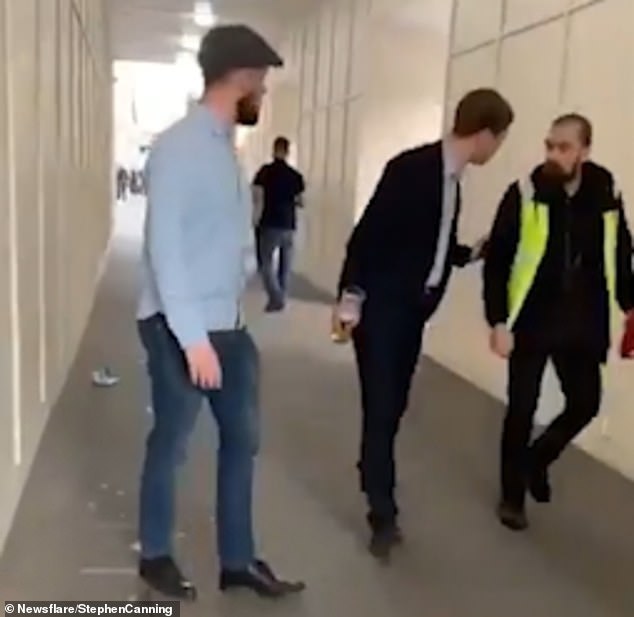 They lead the guard out of the alleyway as the homeless man screams ‘And what? And what?’ Fullers, who own the Red Lion, said an investigation is underway. The Met Police said no one was arrested

He continued: ‘Police have said if the security guard touches us to call them and they’ll arrest him immediately – shame the same doesn’t count for homeless people….’

He added: ‘When the security guard chased the homeless man I ran after them and put myself between them both, actually. But I didn’t tweet about that, because this isn’t supposed to be about me. (I’m the guy who manages not to spill his pint.)’

Replying to Cllr Canning, Fullers, which owns the Red Lion, tweeted: ‘We have contacted our security company and a full investigation is underway.’

The Metropolitan Police, who are based at Scotland Yard just a stones throw away from the pub, said police attended the ‘altercation’ but no one was arrested.