You will find them on the beaches! Moment Winston Churchill’s swimming trunks come off when he goes headfirst down water slide is revealed in newly-colourised footage

He’s the man who gravely told Britons in the dark days of 1940 that ‘We shall fight them on the beaches’ as the threat of a Nazi invasion loomed.

Winston Churchill’s speeches during his time as Prime Minister in the Second World War are perhaps what he is best remembered for.

But now, previously unseen footage shows another side to the war hero: the moment he goes backwards down a water slide and loses his swimming trunks.

The colourised clip, released from the Churchill family archives, features in a new documentary about the PM’s life and career which is airing tomorrow on Smithsonian UK.

The embarrassing moment was filmed in 1934 when Churchill, aged 60, was on holiday in the French Riviera with his family. 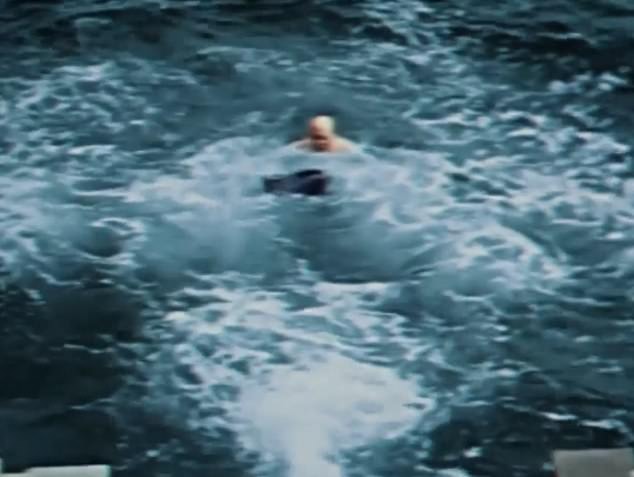 It was later rumoured that both Churchill and his son were romantically involved with Castleross, even though both men were married.

Churchill is seen in the clip wearing a black pair of trunks as he lies down at the top of the slide and then plummets into the sea before his head re-emerges from the water.

When the bubbles generated by his adventure die down, the politician’s trunks are seen floating next to him.

Also shown is a clip filmed earlier the same year of Churchill playing with his son in his newly-built swimming pool at Chartwell, his Kent home. 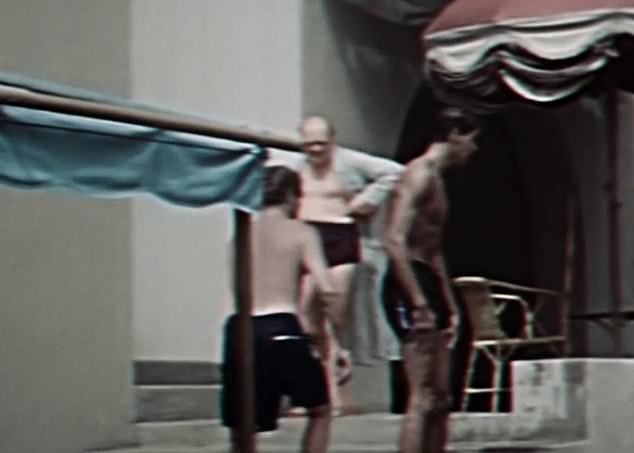 The colourised clip, released from the Churchill family archives, features in a new documentary about the PM’s life and career which is airing tomorrow on Smithsonian 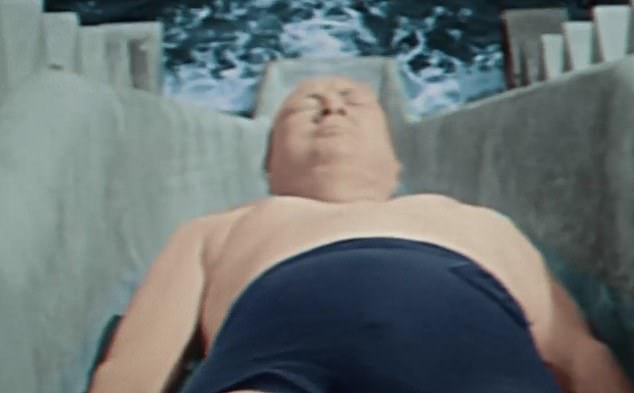 The embarrassing moment was filmed in 1934 when Churchill, aged 60, was on holiday in the French Riviera with his family 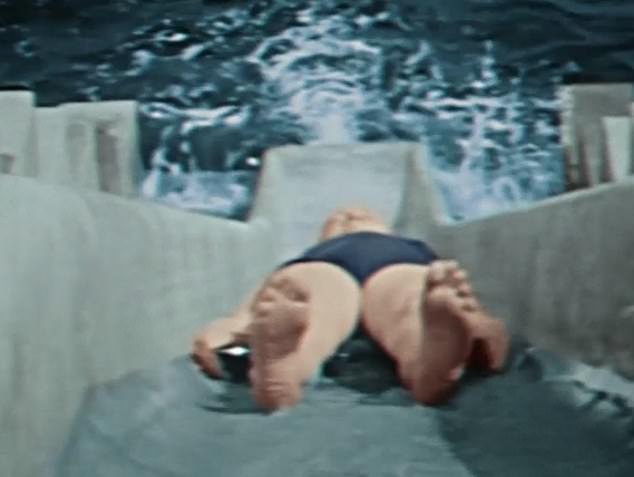 He and Randolph are seen taking turns to jump out of the water with their arms by their sides.

They also splash water at each other in the pool, which is now filled with plants and is home to geese at the property, which is managed by the National Trust.

The incredible clips show a different side to Churchill, who at the time was in the political wilderness after a disastrous stint as Chancellor of the Exchequer from 1924 to 1929.

Throughout the 1930s, Churchill made speeches railing against Britain’s then policy of appeasement towards Adolf Hitler’s Nazi Germany.

His criticisms largely fell on deaf ears until the Neville Chamberlain – Prime Minister from 1937 – began to re-arm in the face of Hitler’s aggressive actions.

But it wasn’t until two days after Britain declared war on Gerany in September 1939 following Hitler’s invasion of Poland that Churchill returned to frontline politics, initially as First Lord of the Admiralty. 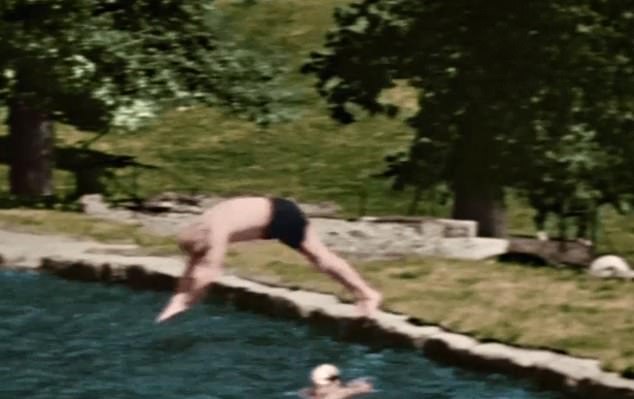 Also shown is a clip filmed earlier the same year of Churchill playing with his son in his newly-built swimming pool at Chartwell, his Kent hom 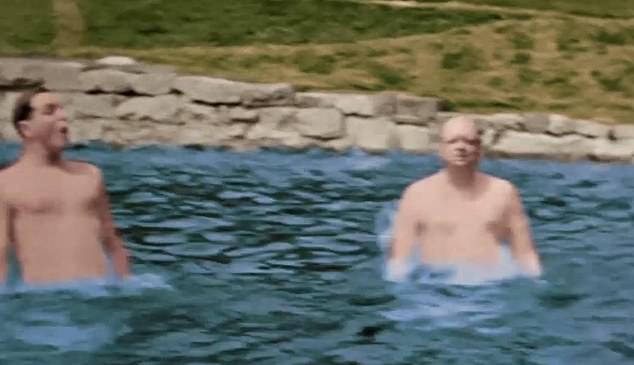 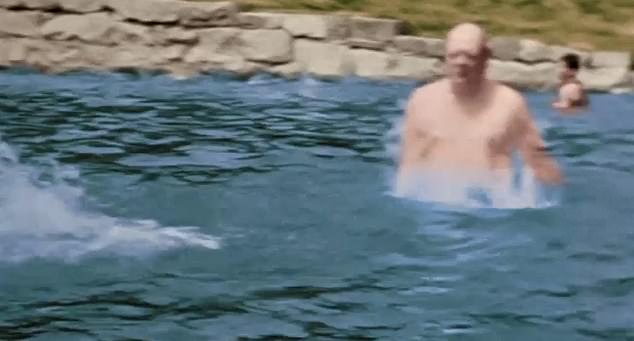 They also splash water at each other in the pool, which is now filled with plants and is home to geese at the property, which is managed by the National Trust

He then became Prime Minister in May 1940 after Chamberlain was forced to resign.

Churchill served in the role throughout the rest of the war before being unexpectedly turfed out of office at the 1945 General Election.

He then returned for a second stint as PM from 1951 to 1955, when he retired after suffering a stroke.

With his wife Clementine, Churchill also had other daughters Mary, Sarah and Marigold, who died aged just two in 1921.

After his retirement from frontline politics, Churchill repeatedly holidayed in the south of France and in the principality of Monaco, where he enjoyed the hospitality of billionaire shipping magnate Aristotle Onassis.

Britain in Colour is a three-part series starting on Saturday, June 12 from 4pm. The Churchill episode is at 6pm.

‘We will fight them on the beaches’: Churchill’s most famous wartime speeches

Winston Churchill’s rousing speeches inspired a nation and played a key role in maintaining Britain’s morale during the dark early days of the Second World War.

He replaced Neville Chamberlain as Prime Minister on May 10 1940.

Days earlier, the ‘phoney war’, the period of relative calm following the declaration of war on September 3, 1939, had ended with the German invasion of France, Belgium and Holland.

Churchill’s first speech as premier to the House of Commons, three days later, would go down in history as one of his most famous.

He said: ‘I would say to the House, as I said to those who have joined this government: “I have nothing to offer but blood, toil, tears and sweat.”

‘You ask, what is our policy? I can say: It is to wage war, by sea, land and air, with all our might and with all the strength that God can give us; to wage war against a monstrous tyranny, never surpassed in the dark, lamentable catalogue of human crime. That is our policy.

‘You ask, what is our aim? I can answer in one word: It is victory, victory at all costs, victory in spite of all terror, victory, however long and hard the road may be; for without victory, there is no survival.

‘But I take up my task with buoyancy and hope. I feel sure that our cause will not be suffered to fail among men. At this time, I feel entitled to claim the aid of all, and I say, ‘Come then, let us go forward together with our united strength.’ ‘

Extract from his first broadcast as PM to the country on May 19, 1940.

‘I speak to you for the first time as Prime Minister in a solemn hour for the life of our country, of our Empire, of our allies, and, above all, of the cause of freedom . . .

‘It would be foolish . . . to disguise the gravity of the hour. It would be still more foolish to lose heart and courage or to suppose that well-trained, well-equipped armies numbering three or four millions of men can be overcome in the space of a few weeks, or even months…

‘Side by side, unaided except by their kith and kin in the great Dominions and by the wide empires which rest beneath their shield — side by side, the British and French peoples have advanced to rescue not only Europe but mankind from the foulest and most soul-destroying tyranny which has ever darkened and stained the pages of history.

‘Behind them — behind us, behind the armies and fleets of Britain and France — gather a group of shattered states and bludgeoned races: the Czechs, the Poles, the Norwegians, the Danes, the Dutch, the Belgians — upon all of whom the long night of barbarism will descend, unbroken even by a star of hope, unless we conquer, as conquer we must; as conquer we shall.

‘Today is Trinity Sunday. Centuries ago, words were written to be a call and a spur to the faithful servants of truth and justice, ‘Arm yourselves, and be ye men of valour, and be in readiness for the conflict; for it is better for us to perish in battle than to look upon the outrage of our nation and our altar. As the Will of God is in Heaven, even so let it be.’ ‘

Extract from his Commons speech on June 4, 1940, after the evacuation of 338,000 Allied troops from Dunkirk.

‘I have, myself, full confidence that if all do their duty, if nothing is neglected, and if the best arrangements are made, as they are being made, we shall prove ourselves once again able to defend our island home, to ride out the storm of war, and to outlive the menace of tyranny, if necessary for years, if necessary alone.

‘At any rate, that is what we are going to try to do. That is the resolve of His Majesty’s Government — every man of them. That is the will of Parliament and the nation. The British Empire and the French Republic, linked together in their cause and in their need, will defend to the death their native soil, aiding each other like good comrades to the utmost of their strength.

‘Even though large tracts of Europe and many old and famous states have fallen or may fall into the grip of the Gestapo and all the odious apparatus of Nazi rule, we shall not flag or fail.

‘What General Weygand [the French Allied commander] called the Battle of France is over. I expect that the Battle of Britain is about to begin.

‘Upon this battle depends the survival of Christian civilisation. Upon it depends our own British life, and the long continuity of our institutions and our Empire. The whole fury and might of the enemy must very soon be turned on us.

‘Hitler knows that he will have to break us in this island or lose the war. If we can stand up to him, all Europe may be free and the life of the world may move forward into broad, sunlit uplands.

‘But if we fail, then the whole world, including the United States, including all that we have known and cared for, will sink into the abyss of a new Dark Age made more sinister, and perhaps more protracted, by the lights of perverted science.

‘Let us therefore brace ourselves to our duties, and so bear ourselves that, if the British Empire and its Commonwealth last for a thousand years, men will still say, “This was their finest hour.” ‘