Monsoon Accessorize has become the latest high street chain to ask landlords for a cut in rents.

Monsoon is calling for rent reductions on 135 sites out of its 258 across the country.

The company confirmed that accountancy firm Deloitte has been appointed to run a Company Voluntary Arrangement (CVA), similar to Arcadia, owner of Topshop and Burton, which secured backing from landlords earlier this month to cut its own rents. 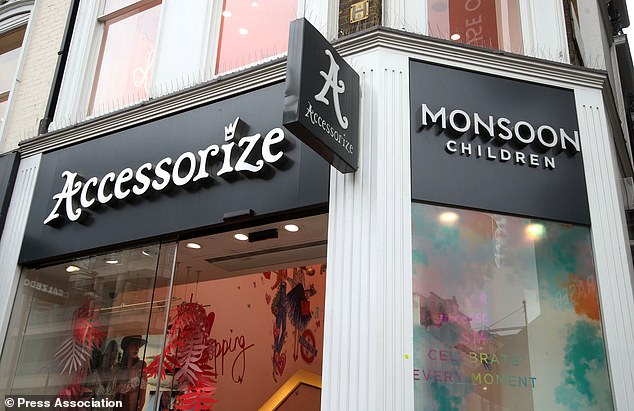 The company said in a statement: ‘The current rent and occupancy costs facing the group are now unaffordable given the fundamental changes that have taken place in the retail sector, and a significant number of stores are delivering a negative contribution as a result.

‘The companies therefore need to reduce the costs of their store portfolios to ensure their ongoing viability. No store closures are currently planned within these proposals.’

A CVA is a form of restructuring that companies use to avoid going bust, but there has been controversy, with landlords claiming retailers are misusing them to cut their costs.

Bosses also revealed that credit insurance has been removed – meaning Monsoon must pay suppliers upfront, with insurers unwilling to cover the costs of any non-payments.

As part of the CVA proposals, Monsoon and Accessorize’s owner, Peter Simon, has already provided an emergency £12million loan – which will be repaid first if the company goes bust – and a further unsecured credit facility of £18million at 0% interest, to enable the turnaround plan to be implemented.

The £18million will only be available if the CVA passes.

Mr Simon has also said he would reduce rent on the company’s head office, which he owns, by 50%. 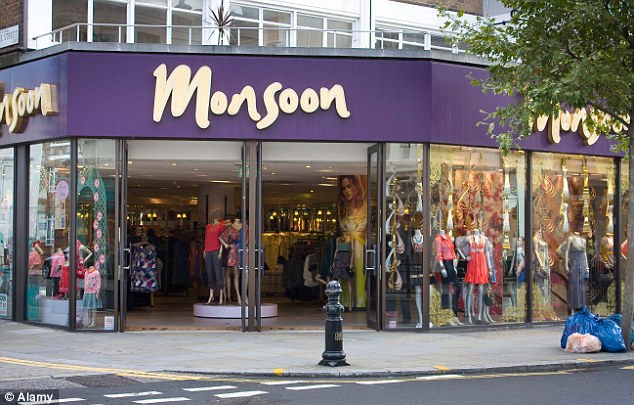 Monsoon started in London in the 1970s. The first Accessorize shop opened in 1984

To encourage landlords to sign up to the deal, company bosses have proposed a profit share scheme, where they could received up to £10million if the stores are profitable and beat sales targets in future years.

A meeting will take place on July 3 where landlords will vote on the proposals.

Paul Allen, chief executive of Monsoon Accessorize, said: ‘Trading for the group has been difficult for some time, as it has been for much of the retail industry.

‘In early 2016, we implemented a plan which initially delivered positive like-for-like store sales. However, in the two years that followed, overall like-for-like sales have decreased as market conditions declined.

‘The proposed CVA is designed to reduce store operating costs and to bring the costs more in line with market rents.

‘Through implementing the CVA and the shareholder credit facility, the group will be able to invest in the business, the brands, and in growing profitable sales channels – both in-stores and online.’

What are CVAs are why are they contentious?

What is a CVA?

A company voluntary arrangement (CVA) is a way for companies to avoid administration by persuading creditors – usually landlords – to cut the bills. The premise is, that without a CVA, the company would go bust leaving landlords taking a hit that is not as bad as if they collapsed. Other creditors such as suppliers and the Pension Protection Fund also get a vote, but it is usually landlords who stand to take the biggest hit.

How popular are they?

In the past two years, several high-profile businesses have used them as a way to survive without resorting to mass redundancies and unpaid bills. The high street and restaurant sector has been particularly heavy users, with rising wage and business rates bills hitting profits.

Do they always pass?

In the majority of high profile CVAs, they have passed, although there are a few examples where they’ve faced a backlash. Last year’s House of Fraser CVA passed, but was later challenged by landlords. The action contributed to the delay in new funds for the business and its subsequent collapse. Mothercare was defeated on one of its CVA proposals last year, meaning placing its subsidiary Childrens World into administration. However, the rest of the CVA went ahead as planned.

Why are they contentious?

Melanie Leech, chief executive of the British Property Federation, said: ‘CVAs are never easy as property owners are being asked to absorb large losses, which impacts the investment that these owners manage, including many of our savings and pensions. All those affected need to believe there is a credible turnaround plan in place to restore the business’ long-term health and safeguard jobs. These are difficult decisions to take, particularly in a pressurised process where landlords are given little time to scrutinise proposals.’