The owner of Melbourne artist colony Montsalvat is seeking a court order to force its founder’s granddaughter to vacate one of its properties.

Rhiannon Jorgensen has been living rent-free at Montsalvat’s former hobby farm at Christmas Hills, 20 kilometres east of the colony’s main Eltham centre. Its barn is often used to host music and literary events. 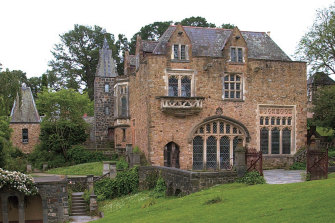 There are no plans to sell the main Montsalvat property in Eltham.

The Montsalvat Trust claims Ms Jorgensen was last year issued with six letters requesting she vacate the property, in Melbourne’s outer north-east, but that she had not complied.

“The defendant [Ms Jorgensen] failed, neglected or refused to deliver up vacant possession of the property,” said a statement of claim filed in the Supreme Court of Victoria last week.

Ms Jorgensen is a granddaughter of the late Justus Jorgensen, who with his friends established Montsalvat, with its neo-medieval stone buildings, in 1934. 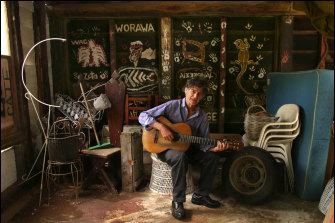 The late Sebastian Jorgensen in 2005 in the Christmas Hills barn.Credit:Cathryn Tremain

At the time, the trust said it had decided to sell the farm and it claimed that Ms Jorgensen had no entitlement to stay there.

A trust spokeswoman said last year that the proceeds of the sale of the 11.5-hectare property, which a local real estate agent valued at between $800,000 and $1 million, would be invested in the future of Montsalvat.

Montsalvat has no plans to sell its Eltham property.

The trust spokeswoman said last year that the trustees had allowed Sebastian Jorgensen to live at the Christmas Hills property for the rest of his life at no cost.

However, after Mr Jorgensen’s death, the trust said Ms Jorgensen had remained at the site despite having no entitlements to the property.

The document lodged in the Supreme Court states that Justus Jorgensen’s 1975 will left the land and buildings in Eltham for public educational purposes and the trust had the power to sell Mr Jorgensen’s “residuary estate” at its discretion.

The statement said the Christmas Hills property was part of the residuary estate.

The trust is seeking a court order that it recover possession of the property. It is also seeking costs, and “such further or other order as the court sees fit”.

The running of Montsalvat was taken out of the founding families’ hands 15 years ago when it fell into debt, with a new board appointed as part of a state government rescue package.

Neither Ms Jorgensen nor the Montsalvat Trust wanted to comment.

However, a group called the Montsalvat Meeting Pool said last year that Montsalvat had lost its artistic focus and called on at least two artists or people connected to founding families to be on the Montsalvat board.