Delhi: A campaign to kill mosquitoes through intense spraying has been blamed for an illness that left more than 300 people in hospital in a town in southern India.

Victims complained of nausea, burning eyes and seizures and a 45-year-old man died of epilepsy-type symptoms at the weekend in Eluru in the state of Andhra Pradesh.

An official report said up to 340 people have fallen sick since Saturday night, local time, with 157 still undergoing treatment. The 45-year-old died on Sunday. 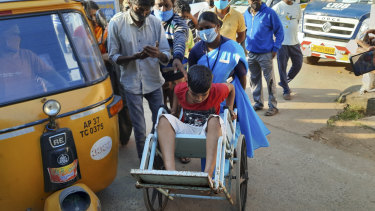 A young patient is brought in a wheelchair to the district government hospital in Eluru.Credit:AP

Residents of Eluru – known as mosquito city – said authorities had been spraying anti-mosquito chemicals in the area over the past week.

Dhananjay Kumar, a local man, said the spray created a "massive fog", adding: "It seems the chemicals sprayed by authorities led to the disease."

However, health officials said the exact cause of the illness was unknown.

"We were informed by some locals that anti-mosquito spray resulted in the infection. As of now, I can only say the exact cause is not known yet. We have sent samples to New Delhi and expect the reports on Tuesday," they said.

"We ruled out water contamination or air pollution after officials visited the areas where people fell sick," Alla Kali Krishna Srinivas, the state's health minister, said, with those in hospital testing negative for COVID-19.

Andhra Pradesh has the third-highest COVID caseload of any state in India with 800,000.