‘Every day is a nightmare’: Mother of missing Oxford Brookes student Richard Okorogheye, 19 says she feels ‘completely helpless’ as she urges him to make contact 13 days after he disappeared

The mother of missing 19-year-old Richard Okorogheye has said her life is a ‘complete nightmare’ in the wake of her son’s disappearance two weeks ago.

Mr Okorogheye, who has sickle cell disease, was last seen by his family when he left home in the Ladbroke Grove area of west London at 8.30pm on Monday March 22. He was reported missing two days later.

He was last seen on CCTV in Loughton, Essex, in the early hours of Tuesday March 23, walking towards Epping Forest, and has not used his phone since his disappearance.

The Metropolitan Police said the search of Epping Forest woodland is continuing for the fifth day today, but that nothing of relevance to the investigation had been found over the weekend.

Police divers have been deployed and were seen in one of the areas of water in the woodland in north-east London.

Speaking to The Guardian, Mr Okorogheye’s mother, Evidence Joel, said waiting for information on her son’s whereabouts has been ‘hell’.

She told the paper: ‘Every day is a nightmare for me now.

‘I feel completely helpless. Helpless, and also, sorry to use this word, but I feel useless. Because I want to go out there, to do something to look for him, search for him, anything.

‘But I can’t’, she said of needing to remain at home in case he makes contact.

The 19-year-old, who has sickle cell disease, was last seen in CCTV footage recorded near Epping Forest the day after his disappearance

Scotland Yard previously said that detectives continue to keep an open mind about the student’s whereabouts.

Initial police inquiries identified Mr Okorogheye leaving his home address and heading in the direction of Ladbroke Grove at around 8.30pm.

In a previously confirmed sighting on Monday March 22, Mr Okorogheye was seen boarding the number 23 bus southbound in Ladbroke Grove at 8.44pm.

CCTV footage shows he was wearing all black and had a black satchel bag with a white Adidas logo, worn across his lower back.

Police divers have been seen searching a pond in Epping Forest as part of the investigation into the disappearance of 19-year-old student Richard Okorogheye. Pictured: April 2

Police divers have been deployed and were seen in one of the bodies of water in the woodland in north-east London. April 1

Police said further inquiries have established that he then took a taxi journey from the W2 area of London to a residential street in Loughton.

He was captured on CCTV walking alone on Smarts Lane, Loughton, towards Epping Forest at 12.39am on Tuesday March 23.

On Thursday, the force said Mr Okorogheye’s phone has not been in use since his disappearance.

Ms Joel previously said that her son had spoken of ‘struggling to cope’ with university pressures and had been shielding during the Covid-19 lockdown.

On Saturday police made a direct appeal to the missing student to get in touch and ‘let us know you are safe’. The search team pictured in Epping Forest, north-east London

Detective Superintendent Danny Gosling said in an appeal: ‘My message to Richard is clear. Our only concern is your safety. You are not in trouble and have done nothing wrong’

As someone with sickle cell disease, Mr Okorogheye would only leave the house to go to hospital for regular blood transfusions for his condition.

She told The Guardian the current cold weather, which could cause Mr Okorogheye substantial pain, was a major concern.

She said: ‘We know he didn’t take a jacket when he went out. That’s really worrying.’ 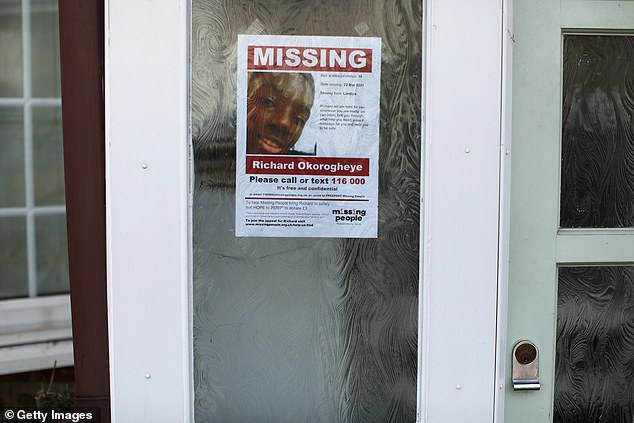 A ‘missing’ poster for Richard Okorogheye is displayed in a window of a house on April 1, in Loughton, England

On March 22, Mr Okorogheye was seen boarding the 23 bus southbound in Ladbroke Grove at 8.44pm. CCTV shows he was wearing all black and a black satchel bag with white Adidas logo

Mr Okorogheye was seen boarding the 23 southbound bus in Ladbroke Grove at 8.44pm on March 22

Ms Joel added she had no idea as to what could have prompted Mr Okorogheye’s disappearance, and called on his online community of friends to contact police if they have any information.

She also issued a message to her son, telling him: ‘Everybody misses you. And we love you very much. We want you home. Please come home.’