Tenacious motorists hit with hefty bills for pothole damage are fighting back: Councils have paid £32 million in compensation in the last five years

This winter, two million new potholes are expected to break up our roads – caused by a lethal combination of freezing wet weather and council cuts to road repairs.

These craters cause thousands of pounds of damage to vehicles, as well as serious injuries and even deaths. Yet rather than simply paying the cost of a repair, it may be worth contacting the council responsible for maintaining the road to demand that it foots the bill.

Councils have given £32 million in compensation for people injured by potholes in the past five years, according to law firm Lime Solicitors. Only one claim in four is successful, but experts believe the figure would be much higher if motorists knew how to fight back.

Edmund King, president of the AA, says: ‘If you are willing to be tenacious, it is worth seeking compensation.’

On average, the AA has received 225 more emergency call-outs each day this month for cars damaged by potholes – bringing the daily average up to 1,725. Most are for blowouts and punctures, costing £100 or so to repair, but some involve suspension damage which can cost £1,000 or more. 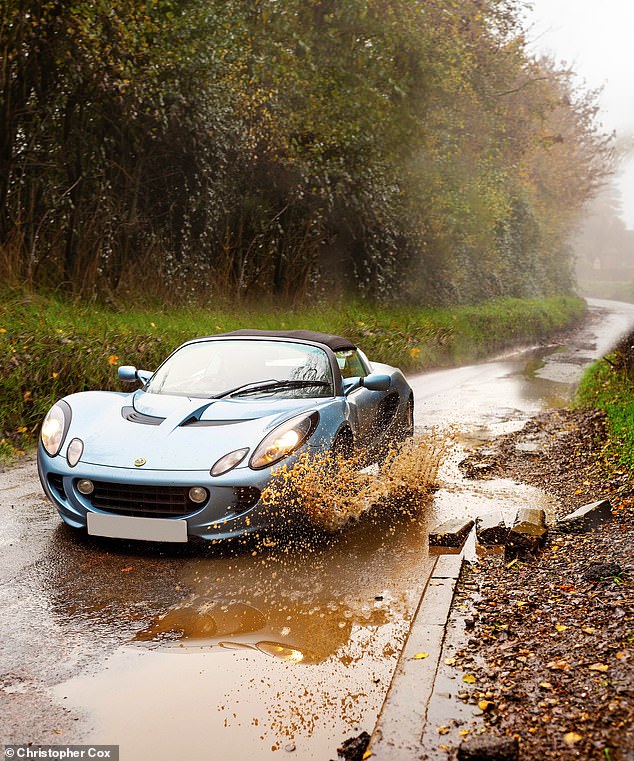 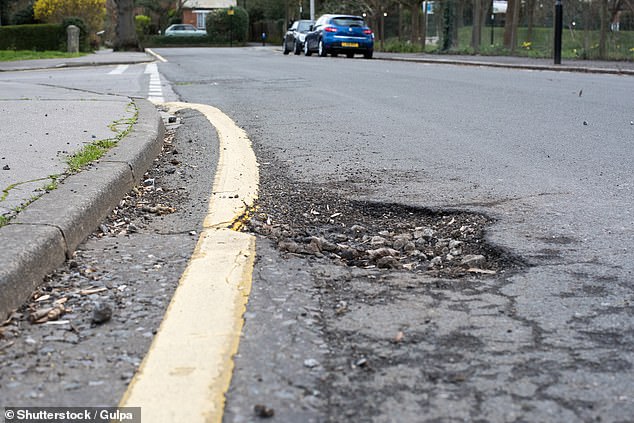 These craters cause thousands of pounds of damage to vehicles, as well as serious injuries and even death (file photo of a big pothole in Croydon, London)

If you hit a pothole, there are simple steps you can take to claim compensation. Firstly, note the date and time and take pictures of your vehicle and the crater. Ideally, also take measurements – councils can claim a depth of two inches is required to call it a pothole. Then go to a garage for a repair quote.

Check websites such as Fix My Street or Fill That Hole to see if anyone else has reported the pothole. If so, you have a stronger case. When you claim for compensation, a form should be available via the council’s website. If the car was damaged on a motorway, contact National Highways.

The Government had set aside £2.5 billion as a pothole fund to help councils maintain roads from 2020 to 2025 – but there are fears this funding, hoping to plug ten million craters, could be paused at some point during the financial crisis. According to trade body Asphalt Industry Alliance, it would take £12.6 billion to repair all potholes.

Paramedic Mark Davy understands all too well the lethal danger of potholes. He has had to attend many fatal road accidents caused by motorists having hit or swerved to avoid a hole in the tarmac.

As a keen motorcyclist, Mark could have been one of the riders killed in a road accident involving a pothole after hitting one in Epping, Essex, when he was 22 and being thrown off his motorbike. It left him with a shattered knee that is now made of Teflon and plastic.

A member of campaign body Motorcycle Action Group (MAG), Mark is deeply concerned about the number of potholes. On commutes from his rural Hertfordshire home, he travels along a treacherous road three miles north, near the village of Furneux Pelham. 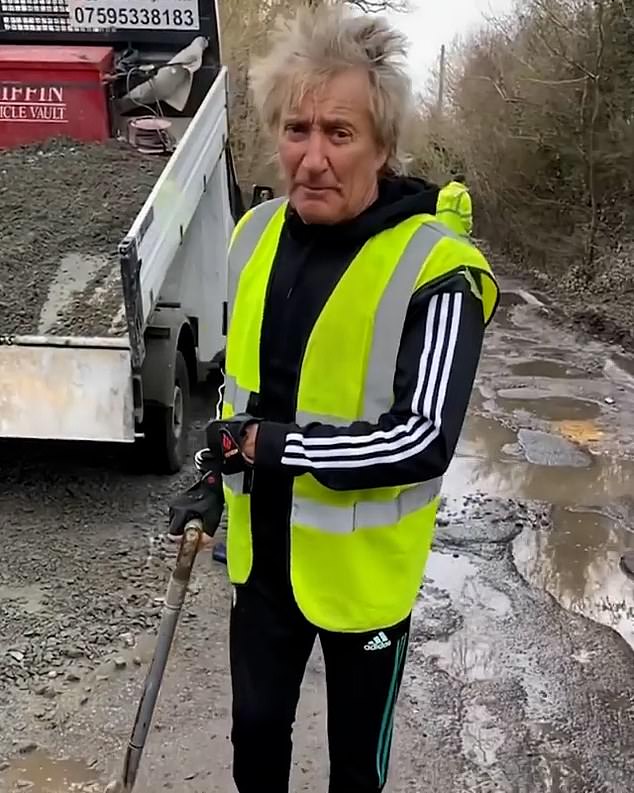 ROCKY ROAD: Sir Rod Stewart took fixing potholes near his home into his own hands 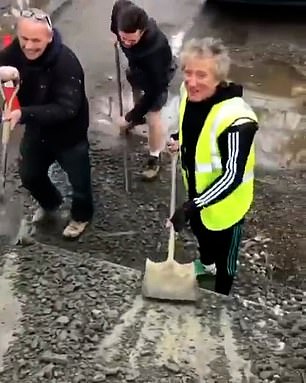 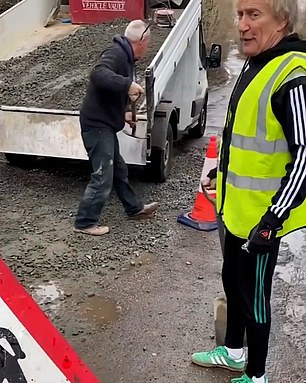 After waiting months for the council to fix potholes Sir Rod Stewart (pictured), who lives in Essex, picked up a shovel and repaired the road with friends

During daylight, one particular pothole looks like a giant puddle – 5ft by 10ft. In the dark, it is invisible. In fact, the apparent puddle is a 5in-deep crater. For a low-slung car, the damage could cost hundreds of pounds if the hole were driven over at speed. On a motorbike, hitting this crater could be fatal if a biker is thrown off.

Mark says: ‘It looks like a puddle but you can’t know what is underneath – until it is too late.’

Research by MAG reveals that on average, four motorcyclists a year die due to poor road maintenance, with a further 70 suffering life-changing injuries.

Hertfordshire County Council, like other local authorities, insists it deals with dangerous potholes quickly – but the road outside Furneux Pelham has been in a state of disrepair for more than a year.

The same issue was faced by rock star Sir Rod Stewart, who lives 14 miles south, in Essex. After waiting months for the council to fix potholes, Sir Rod picked up a shovel and repaired the road with friends.

Hertfordshire County Council says: ‘The majority of potholes that need rapid attention receive a repair either within five days or 20 days, depending on the size of the pothole and how busy the road is.’