Eeek! Daring mouse goes nose-to-nose with a huge cat but the curious moggy just wants to SNIFF it

This is the moment a mouse escaped death by a whisker when it encountered a curious cat that just wanted to sniff it.

The startling scene, filmed at an unidentified location in the US, saw the tiny rodent walk right up to huge tabby and white cat called Mercedes.

But instead of pouncing and dispatching the tiny rodent, the cat seemed wary of it and decided to investigate further.

The filmer said the cat had been sitting on their wooden patio when ‘a brave little mouse decided to walk up and become friends with her!’

The daring rodent didn’t run away but instead moved closer to smell Mercedes, coming face-to-face with the feline predator.

The pair watch each other, every so often getting closer to the other’s face to smell them.

Mercedes briefly looks away from the mouse when a hummingbird flies behind the gate, hovering nearby before flying away.

As Mercedes moves and blocks the view of the mouse from the camera, her owner got up and zoomed the video in on the pair.

While cats are generally known for their killing instinct, dispatching mice, rats, birds and even garden frogs, this is by no means the only exception. 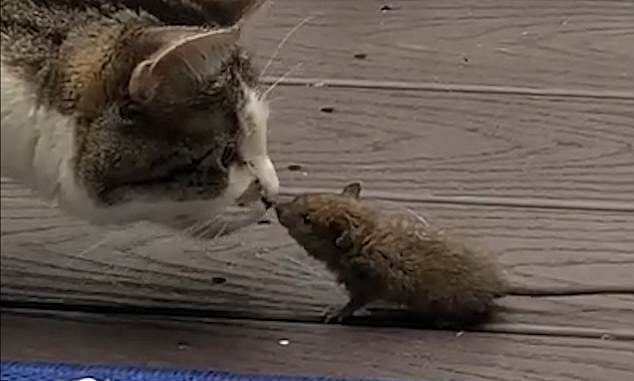 A cat and rat were caught relaxing together in the sunshine after a few days of rain in Hangzhou, the capital of Zhejiang Province in eastern China.

The pair of animals were filmed sitting on a running track together at the end of last year.

The cat initially looked around and approached the rat. The cat eventually decided to enjoy the sun in peace with the rat on its side.

In rodents, a single-celled parasite called Toxoplasma gondii can lead mice and rats to get more easily captured by their feline predators.

It is thought to make mice lose their fear of cats and makes them less anxious and risk-averse in general.