Nicola Sturgeon warned that the NHS is ‘not for sale at any price’ today in a blast at Donald Trump over a post-Brexit trade deal.

She will unveil plans to introduce a law blocking the health service from being picked off in international commerce agreements at the SNP election campaign launch this morning.

The Scottish First Minister plans to introduce the NHS Protection Bill in the next parliament, claiming it will ensure the health service is not used as a ‘bargaining chip’ in trade deals.

Ms Sturgeon claims that despite health policy being devolved to the Scottish Parliament, the UK Government could still ‘sell off’ the NHS in trade negotiations.

Opposition parties have expressed concern about the possibility of the NHS being opened up to American healthcare companies in a trade deal, after US President Donald Trump said ‘everything was on the table’ during a joint press conference with then prime minister Theresa May.

Ahead of the campaign launch in Edinburgh, Ms Sturgeon said: ‘Boris Johnson has been very clear about his desire for a post-Brexit trade deal with Donald Trump – and no-one should underestimate the threat which that poses. 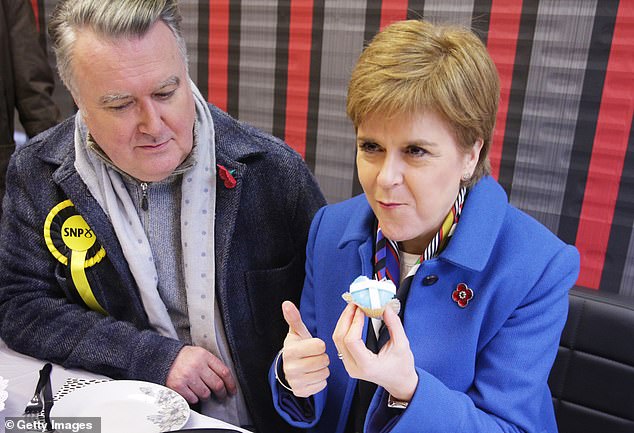 Ms Sturgeon claims the UK Government could still ‘sell off’ the NHS in trade negotiations, including with the United States

‘So in order to deal with that immediate threat from the Tories’ post-Brexit plans, the SNP will bring forward a Bill that would protect the NHS across the whole of the UK from ever being harmed by a Tory-Trump trade deal.

‘Our NHS is there to care for and protect us – now it’s our turn to stand up and protect the NHS.’

The proposed law stands little chance of passing unless Boris Johnson loses power in the December 12 election, or there is a hung parliament.

If the Conservatives win the SNP could introduce it as a private members’ bill, but unless the government agrees to back it, it is likely it would lose when put to a vote.

The First Minister called on opposition parties to support the Bill.

She said: ‘All parties say they oppose including the NHS in trade deals – so I challenge every party to today commit to backing this Bill, and stopping the Tories trading our NHS for trade deals with Donald Trump.’