Nine Entertainment has apologised to former federal Liberal MP Andrew Laming as part of a settlement of his Federal Court defamation action over a Queensland news broadcast.

Laming filed proceedings against Nine, publisher of this masthead, in August last year over a segment on Nine News Queensland’s 6pm news bulletin on March 27 that he alleged portrayed him as a “lecherous” person and a “pervert” who took a photo of a woman’s buttocks for sexual gratification. 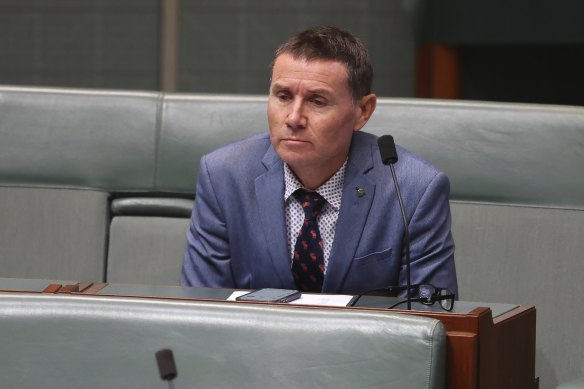 The broadcaster spoke to a woman who claimed Laming took an “inappropriate” photo of her bottom on his mobile phone while she bent down to fill a fridge with drinks at a Brisbane business.

Queensland Police conducted an investigation into the allegations about the photograph, and determined the evidence did not support the conclusion that any criminal offence had been committed by Laming.

Laming maintained the photo was “completely dignified” and showed the woman in a kneeling position. It was a “humorous situation” where she was attempting to get “every possible can” of drink into a fridge “like a game of Tetris”, he said last year.

Laming argued the Nine News report defamed him in several ways, including by suggesting he took a lewd photo of the woman without her knowledge or consent, that he was “lecherous” in taking an indecent photo, and that he was “a pervert” who took a photo “for his own sexual gratification”.

The Federal Court heard on Wednesday that the parties had settled the proceedings before a trial was slated to start on October 10.

Nine said in an apology read in court: “On March 27, 2021, Nine News Queensland broadcast a report about Dr Laming, who was at the time a member of federal parliament.

“Serious allegations were made about Dr Laming in that report and he sued Nine because of it. Nine News has now seen material which indicates that the photograph Dr Laming took was not lewd in nature.

“Nine News unreservedly withdraws those allegations about Dr Laming and apologises to him and his family for the hurt and harm caused by the report.”

Laming’s barrister, Sue Chrysanthou, SC, said the proceedings had otherwise “settled on confidential terms and the parties, by consent, seek an order … that leave be granted to the applicant to file a notice of discontinuance within seven days, on the basis that there will be no order as to costs”.

Laming said in a statement that Nine had “acknowledged seeing material convincing it to unreservedly withdraw the serious allegations it made; and to publicly apologise to me and my family”.

“It is highly commendable that they … have agreed to right wrongs and apologise when presented with the facts.”

He said he left court with “confidence in our defamation laws and our courts”.

“Australians can remain proud of our free press that requires the media to report matters of public interest in a fair and balanced way,” he said.

“And when mistakes are made, as they were in my case, correct the record and apologise.”

The former politician has pursued, and received, apologies from several political and media figures over claims the photo was an example of “upskirting”.

ABC journalist Louise Milligan agreed last year to pay Laming $79,000 in damages plus legal costs over a series of tweets suggesting he had admitted to the criminal offence of taking an “upskirting” photo of a woman’s underwear. The national broadcaster indicated it would foot the bill in that case.

Our Breaking News Alert will notify you of significant breaking news when it happens. Get it here.