Norway will stop all cruise ships with more than 100 people on board from disembarking at Norwegian ports in the wake of the outbreak of COVID-19 on a Hurtigruten cruise ship, the Norwegian Health Minister said on Monday.

The new rules will initially apply for 14 days, Bent Hoie said. They will not apply to domestic or international ferry traffic. Norway has ferry connections to Germany and Denmark, among others. 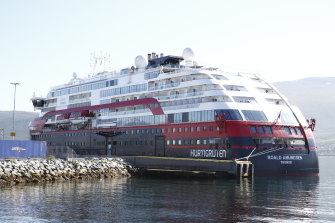 The announcement came after Norwegian cruise line Hurtigruten halted all cruises until further notice following an outbreak of COVID-19 on one of its vessels.

At least 41 passengers and crew from the MS Roald Amundsen have so far tested positive for coronavirus, while hundreds more have been told to self-isolate for 10 days.

"A preliminary evaluation shows a breakdown in several of our internal procedures," the company's chief executive Daniel Skjeldam said in a statement on Monday.

"Our own failure, as well as the recent rise in infections internationally, has led us to halt all expedition cruises in Norwegian and international waters."

Norwegian police said they would investigate whether any laws had been broken.

Foreign crew had been tested for the coronavirus before leaving their home countries, but did not quarantine before starting work on the ship, the company said.

Passengers were also allowed to disembark before anyone had been diagnosed, triggering a complex operation to trace them.

The MS Roald Amundsen had been scheduled to sail around the British Isles in September. Trips with two other vessels have also been suspended, the company said.

Spain aims to roll out a COVID-19 contact-tracing app in September after a pilot showed it could detect almost twice as many potential infections as human trackers.

In the absence of a vaccine or cure, states are deploying Bluetooth wireless technology to log contacts and alert people when someone they have been near tests positive.

Spain's app was developed by Google and Apple and holds data on individual devices to ensure privacy. It was tested on La Gomera, an island next to the tourist hotspot of Tenerife in the Canary archipelago.

Now the government aims to offer the app to it to COVID hotspots and tourism-dependent areas from August 10, and to regional health authorities from mid-September. 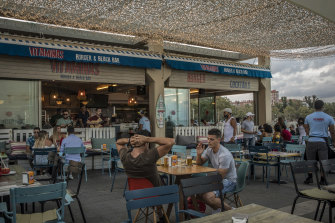 A bar in the Moll de Gregal area of Barcelona, Spain. The country’s tourism-dependent economy has been hit hard.Credit:Bloomberg

Some 3200 people downloaded the app during the test phase, just pipping a target of 3000.

For every virtual positive diagnosis, the app identified an average 6.4 contacts with others, compared with an average 3.5 contacts identified by human tracers in the Canary Islands.

The spread of the disease in Spain slowed as the government imposed one of the strictest lockdowns in Europe, but new cases have started rising again, hitting a post-lockdown record of 1525 on Friday.

The so-called 'Contain Strategy' sets out the possibility of restricting movement and closing down local transport networks, James Slack confirmed when asked whether the government had war-gamed sealing off the capital.