Not bad for a disappointed doctor! As Jonathan Miller dies aged 85, ROBERT HARDMAN shows how the comedy pioneer, author, presenter and theatrical legend could turn his hand to anything 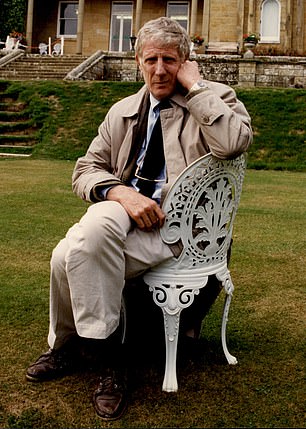 At the passing of illustrious men and women, it is commonly said that they rose to the top of their profession, writes Robert Hardman (Pictured: Sir Jonathan Miller)

At the passing of illustrious men and women, it is commonly said that they rose to the top of their profession. The problem with Sir Jonathan Miller is singling out a particular profession.

He rose to the top of so many that he defies pigeon-holing. Even ‘renaissance man’ does not quite do him justice.

To some he will be remembered as a great director, though they will probably fall into two camps — those who argue that his greatest skill was directing stage plays and those who say his true home was the opera.

Others will remember him, above all, as a great communicator, whether as a presenter on television (a medium he despised) or on the written page.

For a certain generation, his finest hour was on stage as a comedian, a key player in Beyond The Fringe, the groundbreaking satirical revue which influenced the outlook of an entire generation.

He himself would spend his entire adult life lamenting the fact that he never properly pursued the career for which he had studied long and hard: medicine. A qualified doctor — married to a GP — he never lost his love of science (or, for that matter, cigarettes).

Through it all, he listed just a single interest in his Who’s Who entry. It is one which remains unchanged following his death yesterday at the age of 85: ‘deep sleep’.

Famously irascible — he once described the Royal Opera House as ‘a wife-kennel where businessmen dump their wives in order to keep them quiet’ — he was a prodigious talent plagued by insecurity.

Miller came to personify the haughty faux-egalitarianism of the Hampstead liberal — sneering at what he regarded as the dull philistinism of the general public, the Royal Family, the Establishment and anyone voting for the hated ‘Tories’.

Yet he would be feted and adored by all of them, receiving a CBE and, in 2002, a knighthood at Buckingham Palace. 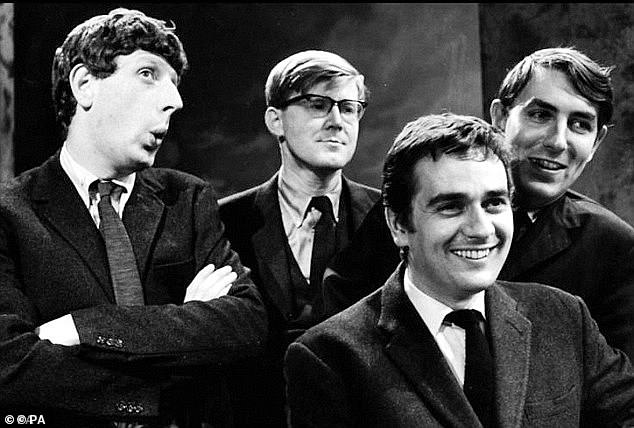 The problem with Sir Jonathan Miller, he writes, is singling out a particular profession (Pictured: Miller with Alan Bennett, Dudley Moore and Peter Cook)

His detractors (and, thanks to his abrasive manner, he had plenty) might call him the ultimate ‘luvvie’. But, in truth, few of them would quarrel with two other terms frequently deployed by his legion of admirers: ‘polymath’ and ‘genius’.

For all his achievements across the arts and sciences over half a century, it will be his youthful appearance as a comedian which remains Jonathan Miller’s greatest contribution to our times.

Miller co-wrote the show, including such immortal sketches as the scene on a wartime airfield: ‘I want you to lay down your life, Perkins. We need a futile gesture at this stage. It will raise the whole tone of the War.’

Beyond The Fringe would go on to inspire television shows like That Was The Week That Was and Monty Python, cultural phenomena which have, in turn, influenced what we watch to this day.

Miller, who was a little older than the other three, came to Beyond The Fringe by a roundabout route. Born in 1934 and educated privately at St Paul’s School, London, he studied natural sciences at Cambridge and went on to University College Hospital (UCH), where he qualified as a doctor in 1959.

His ambition was to become a neuropsychologist, following in the footsteps of his father. At Cambridge he discovered his comic gift and talent for mimicry in student revue group, the Footlights, and even at UCH, Miller performed sketches which had the other junior doctors convulsed with laughter.

Tall, red-haired and built like an Anglepoise lamp, Miller was talent-spotted by the critic and commentator, Bernard Levin, who was among the first to hail him as ‘a genius’. And when, in 1960, an assistant director of the Edinburgh Festival wanted to put together an Oxbridge group to put on a late-night show, young Dr Miller was an obvious choice.

He agreed to take a short break from UCH though, in later years, it was something he regretted. Miller’s idea was to earn enough from the stage to buy a house for his family and then return to medicine. Over the years he regularly threatened to turn his back on theatre and opera, declaring: ‘I’ve never got over the guilt of not pursuing what I was qualified to do.’ 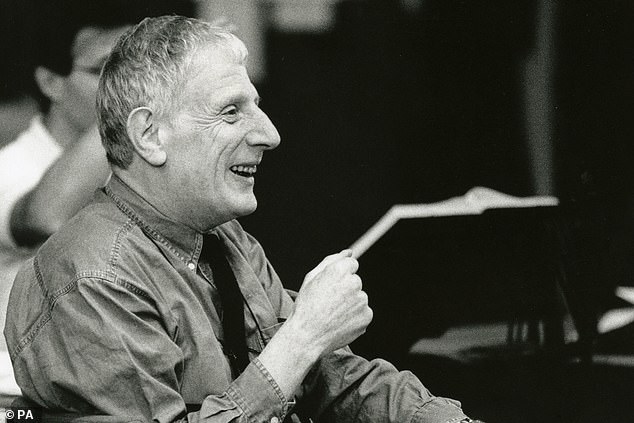 The director, who has died at the age of 85, during a rehearsal at Royal Opera House in London 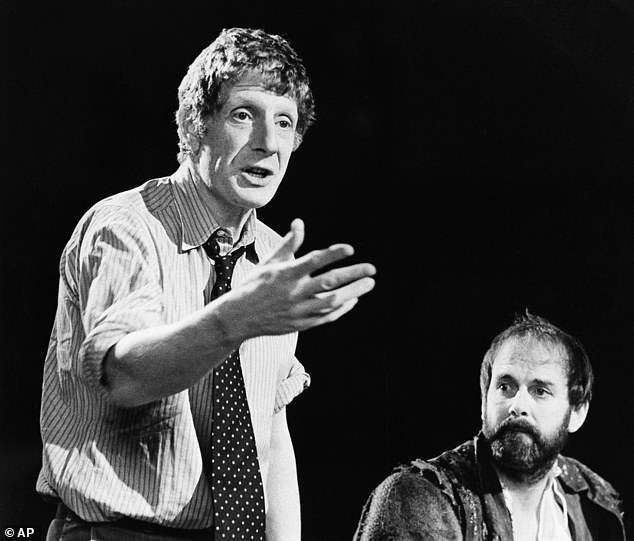 There were half-hearted attempts to return to his first love. But his restless, questing mind needed more stimulation than medicine could give him.

As he said himself: ‘Everything that has happened to me in the theatre has always been the result of my being pathetically susceptible to someone knocking on my door with a frisbee in their hand saying: “Do you want to come out and play?”‘

There was not much play in his upbringing. His parents were both rather distant intellectuals. His father Emanuel, a neurologist turned psychiatrist, was too aloof to guide his own child. He soon developed a sharp mind of his own.

When Emanuel Miller tried to persuade his son to train for his Bar Mitzvah, young Jonathan had already discovered atheism. As he remarked in Beyond The Fringe: ‘I’m not really a Jew. Just Jew-ish. Not the whole hog, you know.’

But it was not until he got married that he discovered what he called ‘the free flow of love in a family’. Rachel Collet had been a contemporary at neighbouring St Paul’s Girls’ School and Cambridge. They married in 1956, and had three children.

Nevertheless, that childhood unhappiness was to leave its mark. Miller developed a stammer, which never wholly disappeared, and once revealed he had never recovered from the failure of his father to give him a bedtime kiss.

In later life he looked for fathers in the shape of patrons of his talent. The first was Huw Wheldon, then controller of programmes at the BBC. In 1964, Wheldon offered him the editorship of his flagship arts programme, Monitor, which served as a launch pad for a critically acclaimed dream version of Alice In Wonderland premiered by the BBC in 1966. Miller had persuaded his old chums to help out — Peter Cook as the Mad Hatter and Alan Bennett as the Mouse.

The next patron was Stuart Burge, who gave Miller the chance to direct plays at the Nottingham Playhouse. He quickly established himself as one of the most innovative of the younger theatre directors, especially in his productions of Shakespeare. 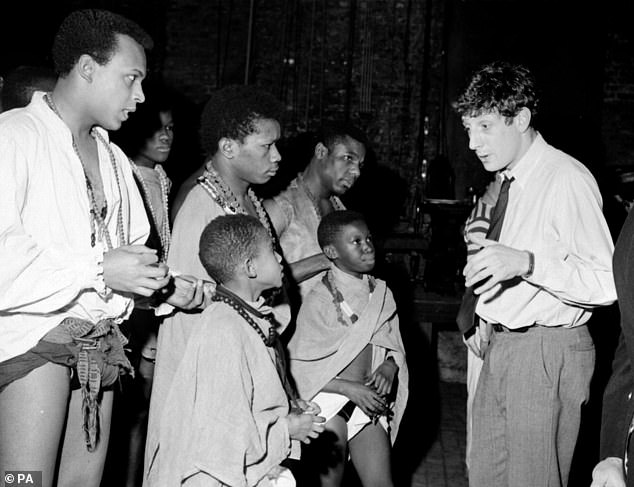 In 1970, Kenneth Tynan, then Literary Manager of the National Theatre, persuaded Laurence Olivier to employ Miller to direct The Merchant Of Venice, with Olivier playing Shylock and Joan Plowright as Portia. It was a triumph and the last of Olivier’s great stage performances.

Between 1970 and 1974, Miller directed another 14 plays, seven for the National where he had become an associate director.

That run came to an end when he resigned after quarrelling with Olivier’s successor, Peter Hall.

It was an early example of Miller’s weak spot, a vulnerability to all criticism. Peter Hall, a more skilled political infighter, noted in Miller ‘a desire to be an outsider in any organisation, to be the victim of authority, and to use the victimisation to collect sympathy and go one’s own way’.

Miller described Hall as ‘a ball of rancid pig’s fat rolled around the floor of a barber’s shop at the end of a busy day’.

Miller detested critics — including the Mail’s Jack Tinker whom he called ‘Jack Stinker’ — ranking them alongside Hitler, Idi Amin and Tory politicians.

He worked best for small companies where smaller budgets enabled him to be more experimental. In 1975 Kent Opera, for example, gave him the latitude to blossom into one of Britain’s most celebrated opera producers — unexpectedly given that, according to his family, he could barely sing or play a note.

For the English National Opera, he directed a Rigoletto set among mafiosi in Forties New York which would prove the most successful of all his productions. Only this month, the ENO revived his production of the Mikado to gushing reviews.

Yet he would only direct a handful of operas at Covent Garden — including a well-received Armani-clad Cosi fan tutte — and just one for Glyndebourne.

He prepared for a stint at the Metropolitan Opera in New York by criticising New Yorkers’ tastes. Monte Carlo, another of his opera venues, was ‘a wretched place, filled with tax-dodging, fur-coated fools’.

He told an audience of television people their medium was ‘important because of its utter banality’.

But most of the public took Miller to heart. Television appearances, notably in the 1978 13-part series The Body In Question, made him a household name again, instantly recognisable with his baggy corduroys and anguished body language.

As the years passed Miller spread his net wider, curating an exhibition for the National Gallery, exhibiting his own art and writing books.

Though devoted to Rachel, he was not easy to live with. Last year, his son, television producer, William Miller, published a poignant and often hilarious memoir — serialised in the Daily Mail — of growing up amid the competitive and egotistical North London intelligentsia among whom his father was right at the top.

‘Much of the time he’s far too busy with work and his big ideas to think about family life,’ William wrote. ‘Unless Dad’s friends come over for lunch or supper, family meals are his idea of hell.’

He also condemned his father’s ideologically led decision to send him and his siblings to a violent, inner city comprehensive, describing it as ‘a cavalier social experiment’ that resulted in them all leaving with no qualifications.

If something did not excite Jonathan that great mind would soon stray. As his son recalled, while the family watched man landing on the moon in 1969, Jonathan Miller quickly got bored — and turned it off.