Disputes over population are a staple of Australian politics. So, it’s no surprise there are plenty of views about what to do about immigration policy now that pandemic restrictions on international borders are being lifted.

Some urge a rapid catch up. A leaked briefing prepared by bureaucrats for new NSW Premier Dominic Perrottet suggested he push for “an aggressive resumption of immigration levels”. It proposed Australia welcome 2 million migrants over the next five years. That’s 400,000 annually or nearly double the pre-pandemic rate. 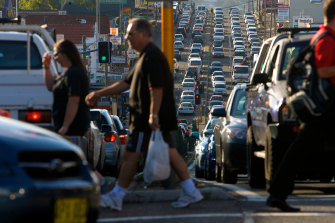 High rates of migration have been blamed for worsening traffic congestion and other urban challengesCredit:Nick Moir

Others want a much more gradual build-up in migration numbers following the economic upheaval caused by the pandemic. This would help drive up demand for local labour and revive wages growth which has been sluggish for nearly a decade, they argue.

And as always there are those calling for much lower migration levels, or even none.

On Monday Prime Minister Scott Morrison announced that from next week eligible visa holders including overseas students, skilled work visa holders and working holidaymakers will be allowed to enter Australia for the first time in almost two years. The government anticipates this will pave the way for around 200,000 new arrivals in coming months.

“The return of skilled workers and students to Australia is a major milestone in our pathway back,” Morrison said.

The Federal Government appears to have rejected the idea of an immigration catch-up period. But nor will there be a go slow. The May budget forecast net overseas migration to bounce back to pre-COVID levels (235,000 per year) by mid-decade and remain around that level into the early 2030s.

That strategy will have far-reaching consequences.

Since the 1970s Australia’s population has been expanding at an average rate of 1.4 per cent a year which is relatively fast compared to other developed countries. But growth has come to a virtual standstill thanks to COVID-19 travel restrictions.

In the year before the pandemic hit Australia added 357,000 people, but that plunged to 36,000 in the year to March 2021. According to official estimates the national population increased by just 0.1 per cent last financial year and is forecast to grow by 0.2 per cent in 2021-22.

AMP chief economist Shane Oliver says the hit to population growth delivered by COVID-19 means that Australia “will be 1 million people smaller than expected pre-coronavirus”. Longer range forecasts show Australia is now expected to have 35.3 million people in 2050, which is 2.5 million less than forecast in 2015. The population will also be older than otherwise would have been the case.

The pandemic has affected another important population driver – the fertility rate. The number of babies born per woman in Australia is expected to fall temporarily because of the economic uncertainty created by COVID-19.

Official forecasts for Australia’s long-term fertility rate have also been subject to major downward revisions, largely unrelated to the pandemic. Back in 2015 the federal government assumed women would have an average of 1.9 babies over the next 40 years but this year it was cut to 1.62 babies per woman.

Australian National University demographer Liz Allen says the pandemic’s simultaneous disruption to both net overseas migration and the fertility rate will be noticeable for many years. Things as basic as family formation have been interrupted by the way COVID-19 put a stop to the way we normally mix socially.

“What’s happened to Australia’s population during the pandemic is nothing short of extraordinary,” says Allen. “We’ll be able to look back in generations to come and actually see the impact on the composition of our population.”

Even the way population is distributed across Australia has been affected. Terry Rawnsley, a demographer and urban economist at KPMG, says population growth in many regional areas, especially those relatively close to capital cities, will be much stronger than expected before the pandemic.

“The surge in people working from home has made a move to a regional area much more attractive,” he says.

Dr Allen says overseas migrants will form an essential part of Australia’s post-pandemic recovery and is fundamental if Australia is to maintain a healthy population profile in the longer term.

“What’s really concerning is that the composition of the population’s age structure has become more problematic during the pandemic,” she says. “Prior to COVID we were struggling with an age structure that meant we had insufficient people for our workforce needs, and that’s even more pronounced now. That’s going to put pressure on the nation in the post-pandemic recovery phase.”

Migrant labour is crucial to many services industries including the care of the young, the elderly and the disabled. A recent study found just over 37 per cent of paid frontline care workers were born overseas in 2016, up from 31 per cent in 2011. Another survey found 60 per cent of migrants in caring occupations were on temporary visas, and around 38 per cent arrived on student visas.

Australia is facing a shortage of at least 110,000 aged-care workers within the next decade according to research published in August by the Committee for Economic Development of Australia (CEDA). The study concluded Australia is unlikely “to get anywhere close” to meeting its aged care workforce needs without migration.

“We require a workforce to sustain the nations needs and at present that means we require immigration to help us,” says Allen.

“Because of our age structure we don’t have a sufficient number of people ageing into the workforce to fill the gaps left by those ageing out, that’s the reality.”

Australia’s permanent migrant intake is capped at 160,000 per year, down recently from 190,000 a year. Skilled workers are favoured for permanent migration, although a growing share of places has been allocated under a program designed to boost business investment. Australia grants a further 13,750 permanent visas under a separate humanitarian program to resettle refugees and others overseas who are in humanitarian need.

A separate temporary migration program is largely uncapped (except for limits on working holiday visa grants for some countries) and demand driven. The stock of temporary migrants – which includes overseas students, working holidaymakers, skilled temporary residents, seasonal workers, and others – has increased by about 50,000 each year over the past decade.

Economic change along with Australia’s increasing integration with global trade and commerce has helped make population flows more complex. Knowledge-based industries which make up a growing share of our economy require skilled foreign workers to be able to come and go much more than in the past. The rise of the international education sector has added to this complexity. During the past 20 years it has emerged as Australia’s biggest services export. But overseas students are also part of the temporary migrant labour workforce (and are sometimes blamed for suppressing wages). They also increase demand for local housing and other services.

“Population can be a complicated issue,” says Allen.

A survey conducted for The Age and the Herald by research firm Resolve Strategic found 58 per cent favour restarting migration at a lower level than before the coronavirus while 20 per cent supported a return to the pre-pandemic rate.

Resolve director Jim Reed says that while Australians are quite positive about immigration overall, many voters, especially in cities, link migration levels to many of the day-to-day pressures they experience.

He is concerned controversies often linked to temporary visa holders, such as the underpayment of wages, could undermine public confidence in migration more generally.

Coates says the focus of migration policy should shift from the size of the migration intake to its make-up.

“There’s far too much focus on the numbers,” he says. “Our work has shown that big gains are not about the size of the intake they are about the composition. If you improve the average level of skill, the average income of migrants it has really big impacts down the track.”

Some experts, including Allen, have called for an explicit population policy which spells out an appropriate level of migration after considering the needs of the economy, labour market, infrastructure development, land use, planning and other factors. This could be published every five years.

“We need evidence-based decision-making which will ensure sustainability and quality of life into the future,” says Allen.