Victorian police used a tyre-deflation device to stop the car of a NSW woman 14 hours after she allegedly evaded a checkpoint to enter the state.

Police say the woman, 57, from Bateau Bay on NSW's Central Coast – part of a designated red zone – drove through a COVID-19 checkpoint in East Gippsland on Wednesday morning. 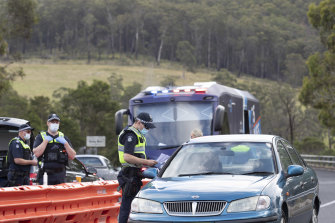 Victoria Police check for permits at a road block at Genoa on the Victorian border.Credit:Rachel Mounsey

"About 4am on Wednesday, December 30, a grey Volkswagen Passat station wagon allegedly evaded the Chandlers Creek checkpoint at a fast rate of speed," police said.

"A pursuit was initiated but soon terminated owing to increasing risk to the community, caused by the alleged manner of the woman’s driving."

Police claim the woman had earlier tried to enter Victoria and was directed to return to NSW and apply for a permit to enter.

About 5pm Wednesday, an off-duty police officer spotted the woman driving on the other side of Victoria, near Nhill, allegedly on the way to South Australia.

About an hour later, in a joint response by general duties police, highway patrol and detectives from Western Region, officers deployed a tyre-deflation device on the Western Highway.

Police say the woman was arrested without incident and will be assessed and interviewed at a later date for alleged offences, including conduct endangering life, failing to stop on police direction and contravening the Chief Health Officer's directions.

On Thursday, Health Minister Martin Foley said he was "extraordinarily upset " to hear about the matter and that the woman had allegedly turned her car lights off to avoid detection.

"The person is now in quarantine and will be facing further police action. So I don’t want to prejudice any possible case, but anyone who is refused entry from NSW, particularly from a red zone, is refused entry on public health grounds," he said.

"To then come back at 3am in the morning and drive at speed through a police checkpoint, and then put your lights off so as to avoid detection, is a degree of poor behaviour I'm sure every Victorian would condemn."

He thanked the 700 police officers currently working on more than 30 border checkpoints.