A curious calm came over Melbourne in the summer of 2018.

For more than two years, a whirlwind of media and political commentary had placed us in the grip of an African gang “reign of fear” – a supposed daily frenzy of home invasions, carjackings and street riots. And then, we weren’t.

Yet there had been no mass arrests or deportations, or a revolution in community outreach to the Sudanese and South Sudanese migrant communities who had been portrayed as a dire public threat.

No, the politicians and newspapers just stopped talking about the “gangs” after a law and order-focused Coalition lost the 2018 state election. In their wake are scarred communities, deep mistrust and a big law and order bill for taxpayers.

The African crime issue has resurfaced in recent weeks as The Age sought to understand Victoria’s transformation from a lightly policed state to the most heavily policed in the country, and why our criminal justice spending is growing at double or triple the rate of other states. 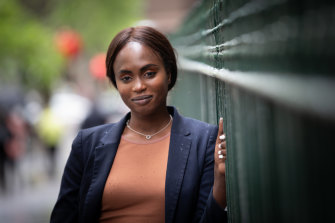 “I would hope we never see anything like that again.”

As we approach a year of federal and state electioneering, it is timely to ask: what was all the fuss about, what was the impact, and can we avoid a repeat?

The first notable suggestion of an African crime problem in Victoria came when News Corp’s Herald Sun first reported on the Apex gang, a ragtag of teenagers who bashed and robbed their way to notoriety in 2015. While police insisted Apex was not race-based, its membership would be indelibly linked to city’s small Sudanese minority.

But the issue really exploded after a rolling brawl at Melbourne’s Federation Square during the city’s annual Moomba Festival in March 2016.

Despite police describing those involved as a “United Nations” of Melbourne youth, state-based and national media, the Herald-Sun in particular, went into overdrive over the “riot” and alleged “African” violence.

Newsrooms went on high alert for African offending, trawling police media releases and court listings for reports about suspects of “African appearance” or with African-sounding names.

By early 2017 the state Liberals were in campaign mode and African “gangs” were part of what party elder Tony Nutt would later describe as a law and order campaign “package”. In his first stint as state Liberal leader, Matthew Guy claimed Melbourne was becoming the “Johannesburg of the South Pacific”. Channelling Donald Trump’s Make America Great Again slogan, he promised that as premier, “making Victoria safe again will be my first, second and third priority”.

‘Every day we’re seeing riots, we’re seeing crime waves. This is a government who is standing by and allowing Melbourne to become the Johannesburg of the South Pacific.’

Crime statistics about the Sudanese and South Sudanese became a rallying cry. 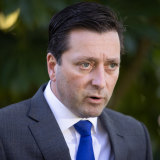 Federal MP Jason Wood was the chair of a parliamentary inquiry into migration that focused heavily on crime and the integration of Melbourne’s African community.

The committee’s December 2017 report sparked a political and media firestorm by using statistics to quantify the extent of Sudanese and South Sudanese offending.

While there is no doubt that African youths were overrepresented proportionally in crime statistics, the report’s most damning figure was based on a calculation error.

It prompted the Victorian Crime Statistics Agency to publicly warn about the “misleading” figures. But the damage was done, the mistake appearing time and again in media reports.

Don Weatherburn – former director of the NSW Bureau of Crime Statistics and Research and author of Vanishing Criminal: Causes of Decline in Australia’s Crime Rate – says that at the best of times, it’s difficult for the public to understand crime statistics.

“People don’t study the crime stats,” he says, “they get their impression of crime’s prevalence from the media.”

In late 2017 The Australian launched a series called State of Disorder, which reported for almost 12 months on the alleged failure of the Andrews government and Victoria Police to deal with the crime crisis.

‘People are scared to go out to restaurants of a night-time because they are followed home by these gangs.’

Early in 2018, federal Liberals weighed in to back their state colleagues, led by then home affairs minister Peter Dutton and his incendiary claim that Melburnians were too scared to go out to dinner at night. Former prime minister Malcolm Turnbull joined in, observing you would “have to be walking around with your hands over your ears” not to hear the “real concerns” about Sudanese gangs. Health Minister Greg Hunt claimed “African gang crime” was “clearly out of control”.

Then, after the Coalition’s relentless campaigning on law and order issues proved fruitless at the November election, the panic was over.

So, what was it all about? Media beat-up? Base politics? Both?

A generous reading of the saga is that it was a toxic interplay between the media and politics that spun out of control as newspapers and politicians chased sensational headlines.

While no media outlet was immune – The Age included – the issue ran most prominently in News Corp’s mastheads, according to a new book Place, Race and Politics: The Anatomy of a Law and Order Crisis. After being virtually non-existent as a media topic just six months before Moomba in 2016, an analysis of media coverage found dozens of references monthly to African gangs, crime or the Sudanese community running by early 2018.

The authors conclude the Moomba “riot” and its aftermath appeared to merge and bring to a head two sources of social anxiety: fear about a youth justice system in crisis, and a suspicion about Melbourne’s Sudanese/South Sudanese communities and their “alleged ‘failure to integrate’, which had been smouldering over the preceding decade”.

Each media report about a street brawl, carjacking or home invasion involving people of African heritage would come to reinforce the crime wave narrative, which gathered in strength as the state election approached.

The book concludes it is difficult, perhaps impossible, to disentangle political and media influences when analysing the law and order “crisis”. “The election increased the newsworthiness of incidents that fit with the ‘crisis’ narrative and media coverage of the incidents served to evidence the problem.”

“If you are an African offender, and certainly if you’re an African youth of South Sudanese background from the western suburbs of Melbourne, rest assured your case will be reported upon,” he told the ABC.

“The media choose to report upon those cases. That creates an impression that we, that our work, a very significant proportion of our work is taken up with African youths from the western suburbs of Melbourne. That’s a false impression.”

Whether opportunistically following media reporting or consciously driving it, there is no doubt conservative politicians knowingly exploited and fanned the African crime issue. The Liberals acknowledged as much. In the official election post-mortem, party elder Nutt conceded the campaign focus on African gangs backfired, with respondents to post-election market research identifying it as a “cheap political tactic”.

Monash University professor of criminology Rebecca Wickes, one of the co-authors of Place, Race and Politics, says the issue “dropped off the radar” after the Liberal Party lost the poll. “It shows this was basically a moral panic, with politicians and the media feeding the narrative and cross-promoting.”

The irony is that the number of Sudanese and South Sudanese offenders has continued to rise in the past two years without provoking any of the political and media hysteria that fuelled the “crisis” before the election.

Victoria Police has also wrapped up the African Australian Community Taskforce, established at the height of the “crisis” in early 2018.

While it was simple for politicians and the media to walk away from these issues when it no longer suited their purposes, it was not so easy for others.

Monica Deng is from a South Sudanese refugee family and came to Australia with her mother in 2004.

She is a Melbourne pharmacist and a director of the South Sudanese Australian Youth United, a grassroots group that works with South Sudanese youth. Deng says the media coverage and politics around African gangs was “unfair and unjust” and often made no sense.

“The effects are very, very damaging even in the longer term,” she says. “A lot of us feel very marginalised. Media vilification can have negative consequences such as lowering the self-esteem of young people.”

Maker Mayek is a South Sudan-born lawyer who co-founded the #AfricanGangs hashtag in response to the “sensationalising” of crime statistics and the profiling of young people from African communities.

Before the 2018 election he tried repeatedly to explain to politicians and journalists that the racialising of crime was damaging his community and the wider Victorian public. 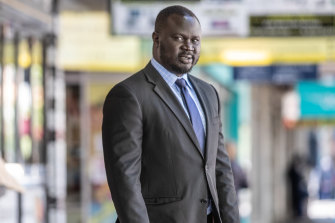 “Families were rejected for rental properties. People were becoming homeless … and there was a big increase in the suicide rate. It became something everyone in the community was talking about,” he says.

But there was a broader community price for the racialised crime panic. As the African gang narrative through 2016 merged with wider concerns about rising youth justice issues following a breakout from the Parkville detention centre, political and media pressure grew intense.

In late 2016 and early 2017, the Andrews government announced a raft of punitive justice reforms including: a new $288 million youth prison and increase in the maximum detention period for young offenders to four years; the transfer of youth justice management from the health to justice departments, which also oversees adult corrections; and an unprecedented $2 billion for 3100 extra police officers, the biggest single increase in police numbers in the state’s history.

These costly initiatives continued a decade-long pattern of tough-on-crime legislation and actions by Labor and Coalition governments that had driven up police and prisoner numbers, costing us billions of dollars a year that could be spent on programs and services that help keep Victorians out of the criminal justice system.

The crime crackdown would continue with the tough bail laws introduced after James Gargasoulas’ 2017 Bourke Street killings. The laws were hailed by Labor as the “most onerous” in the country.

And the saddest outcome of all is that those caught in the crime crackdown tend not to be hardened criminals or violent attackers. They’re lower-level offenders on remand. The growth in prisoner numbers is greater for women than men. For First Nations people it’s greater still, and for Indigenous women it’s greater again.

What now? More of the same? More racialised crime hysteria? More law and order chest-beating before the 2022 election?

Right now, it seems unlikely. An unintended consequence of the Coalition and media over-cooking of African crime, and the conservatives’ drubbing at the 2018 poll, is the lowering of the heat on law and order.

“The landslide election loss sent a strong message that fearmongering is not something that the people of Melbourne and Victoria are willing to accept,” says Mayek.

After the election, and under former opposition leader Michael O’Brien, the Coalition acknowledged the non-sustainability of prison spending and called for a bipartisan approach, leaving open the possibility of bail law reform.

Since reassuming the state Liberal leadership, Guy has been noticeably quiet about law and order, focusing instead on the COVID-19 recovery and government pandemic overreach. Ditto, relatively, the media.

Behind the scenes. Ian Smith has been trying to build bridges between the Sudanese community and senior Liberal Party figures. The chasm is wide.

“I hope that the politicians will take a very different approach to campaigning in future elections,” says Smith. “I think they will.”

Mayek hopes so too. He does not shy away from the challenges to a community still coming to terms with an often troubled past. “Many of us came from war-torn backgrounds. We have experienced violence and we don’t want that for anybody.”

He stresses his community does not expect special treatment from journalists or politicians.