Organisers have apologised to an Austrian climber after a host broadcaster showed a close-up replay shot of her bottom during the World Championships in Moscow.

It is the second time this year that Austrian competitor Johanna Färber has been subject to “inappropriate” TV coverage of her event which she described after the first incident in June as “disrespectful and upsetting”.

The International Federation of Sport Climbing that runs the sport has now apologised again following a very similar incident involving the host broadcaster in Russia on Saturday. 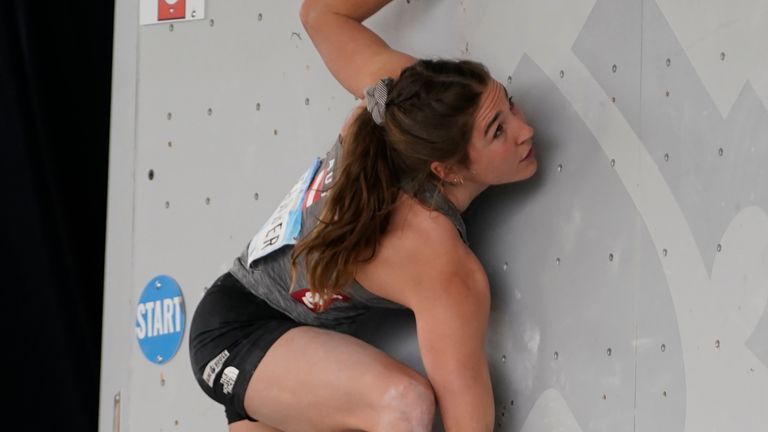 They said: “The IFSC condemns the objectification of the human body and will take further action in order for it to stop, and to protect the athletes.”

The IFSC President Marco Scolaris said: “How many times will things have to be done wrong, before we learn how to do them right?”

Sport climbing made its debut at the Tokyo Olympics this year and has been enjoying a surge in popularity but people within the sport are worried not enough is being done to protect female competitors.

Former GB climber and editor-in-chief of UK Climbing.com, Natalie Berry, told Sky News: “For this disrespectful incident to happen once again to the same athlete is very disappointing, at a time when more eyes are on the sport than ever before and more women and girls are being introduced to climbing.

“While the intentions of the camera operators and editors may not be to sexualise an athlete and instead to focus on a visually interesting chalky handprint, in the context of the sexualisation of women in sport throughout history, it’s quite simply inappropriate.”

She backs calls for robust photography and filming policies to be introduced in climbing as is the case in many other sports.

“As an athlete, self-confidence is a huge factor in competition,” Ms Berry added.

“If athletes feel that their bodies are being inappropriately presented on-screen, it could unfairly affect their performance as well as their mental health.”

Johanna Färber did not wish to comment after the latest incident but her team said she stood by her statement in June in which she said: “We need to stop sexualising women in sports and start to appreciate their performance.”