The US president's move gives Americans 45 days to stop doing business with the platforms, citing national security concerns for the incendiary move. 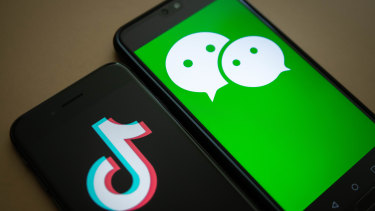 The logo for Tencent Holdings’ WeChat app, right, and the logo for ByteDance’s TikTok app on a phone. Credit:Bloomberg

The apps could be banned from Apple and Google app stores, thereby removing them from US distribution. His twin executive orders mark the latest in a series of rows.

The contentious issues include human rights abuses in Hong Kong, the global influence of Huawei, and the genesis and spread of coronavirus.

But the fallout between the superpowers threatens to directly affect the lives of millions of Chinese citizens in China and around the world. It could also affect American firms in China.

Trump had previously threatened a deadline of September 15 to "close down" TikTok unless another company bought it. The order effectively signals a 45-day deadline for Microsoft, already in talks to acquire TikTok.

TikTok said it was "shocked" and threatened legal action. It said the order "risks undermining global business trust in the United States' commitment to the rule of law".

Trump accused both firms of aiming to "capture vast swathes of information from its users". He said that they allowed the Communist Party to obtain private data on Americans, check up on Chinese citizens abroad, and mount disinformation campaigns.

Trump said: "The spread in the United States of mobile applications developed and owned by companies in the People's Republic of China continues to threaten the national security, foreign policy and economy of the United States."

Wang Wenbin, a Chinese foreign ministry spokesman, said: "The US frequently abuses its national power and unjustifiably suppresses non-US companies. At the expense of the rights and interest of US users and companies, the US is carrying out arbitrary political manipulation and suppression."

But he failed to mention that China blocks many US platforms.

WeChat users, even abroad, have been blocked from opening links to Daily Telegraph stories sent through the platform. Shares in Tencent, WeChat's parent company, fell 8 per cent on Friday before rallying slightly.

TikTok, owned by ByteDance, said: "We have made it clear that TikTok has never shared user data with the Chinese government, nor censored content at its request."

A group of lawmakers in Japan's ruling Liberal Democratic Party has decided to push for steps to restrict the app over concerns data could end up in the hands of the Chinese government, local media has reported.

Japan's foreign ministry was not immediately available to comment. The government has not said it is considering banning the app.