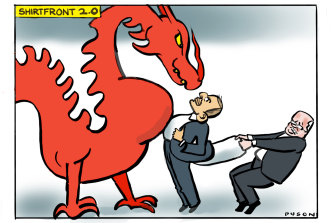 To submit a letter to The Age, email [email protected] Please include your home address and telephone number.

Owning our comments and not using words to wound

I am at one with Barnaby Joyce – “It’s time social media giants were liable” (Opinion, 8/10). Recently I had a book published which has received some lovely reviews on a large international platform. Imagine my horror when the only “one-star” rating included a comment that was an attack on me personally.

This platform is about evaluating and critiquing books, not ad hominem attacks from people who may not like you or your religion, politics or world view. Just as I am doing with this letter, we put our name to our views, owning them and being accountable for them. It is cowardly to stand behind anonymity.

We speak often of being a civilised society and participating in the public conversation where all have a voice, that much vaunted vox populi. These large social media platforms which enable trolling need to be regulated if we are to continue to be communities where all voices are accorded respect, even if our ways of looking at and being in the world are different. We need to use words as wonders, not weapons that wound.
Ann Rennie, Surrey Hills

We expect politicians to behave ethically too

I am not a fan of Barnaby Joyce but I agree wholeheartedly that the time is long overdue to hold social media companies to account on what is posted anonymously on their platforms.

Joyce and his political colleagues also need to lead by example. Sadly too many politicians are the past masters of leaking malicious rumours out of their offices, as well as using their position to spread misinformation and misuse parliamentary privilege to destroy reputations.

This is something Joyce can control in his own party. A good start would be to kick out those who spread malicious misinformation on COVID-19. Just as he rightfully expects social media companies to operate ethically, the electorate rightfully expects politicians to behave ethically.
Peter Farrell, Point Lonsdale

If it is wrong, it must be called out regardless

It is not often that I would find some of Barnaby Joyce’s views agreeable. But he certainly strikes a chord with his comments on the vile rumours that inhabit our social media. However, not so long ago a certain Premier was subjected to similar vile rumours, some even promoted by members of the Coalition in this state. Where was Barnaby Joyce then? Strangely quiet.

It should not take a personal experience of this type of situation to bring oneself to a point of demanding it stop. If it is wrong, it is wrong, and should be called out regardless. In addition, Mr Joyce could also start to call out the many falsehoods that members of his party are currently spreading on a whole range of issues.
Graeme Gardner, Reservoir

The one job where you are paid to be nasty

Scott Morrison (The Age, 8/10) failed to mention the obvious comparison between social media and parliamentary privilege. You can say the most scurrilous, scandalous and slanderous things in both, but you only get paid by the taxpayer in one of them.
Frans Posset, Diamond Creek

Scott Morrison damns social media as “a coward’s palace for cyber bullies”. I thought Parliament filled that role for bully types. Who has forgotten his unjustified character assassination of Christine Holgate in the national sound chamber? With increasing restraints on freedom of speech and opinion, politicians should not be surprised by people’s recourse to social media. Mere citizens often do not share politicians’ inflated opinions of themselves.
Frank Carleton, Longwarry

The peace, the quiet of a social media-free world

How tantalising to learn that Facebook, Instagram, WhatsApp and the like can experience an outage and go offline (The Age, 5/10). Let’s find that switch and flick it. Just think how peaceful, kind, cohesive and meaningfully connected our society could be without social media. Bring it on.
Julie Perry, Highton

Dan Andrews’ response to questions over his contact with United Firefighters Union boss Peter Marshall of “I can’t recall” is just a variation of “I can’t remember” of the Coate inquiry into hotel quarantine. It looks like the Independent Broad-based Anti-corruption Commission (IBAC) should prepare for bouts of amnesia from our politicians.
Martin Newington, Aspendale

The day after three of the world’s most eminent scientists are awarded the Nobel prize in physics for their 50 years of identifying and explaining climate change and its effects, we witness the ridiculous and ill-informed comments from Gina Rinehart dismissing climate change as propaganda. No wonder we are still having a debate. Move on, the science is settled.
Hans Pieterse, Narre Warren North

It is more than a bit rich for the Prime Minister to accuse Queensland of “shakedown politics” over its demand for more hospital funding to deal with the increased COVID caseload after it opens up.

After all, his own Resources Minister, Keith Pitt, is calling for a $250billion financial guarantee for the resources industry to make sure jobs are not lost in coal and gas if and when the government embraces a target of net zero emissions by 2050 (The Age, 8/10).
Rosemary Sceats, Macleod

For our children’s future

Scott Morrison, we do not need you to look after the country in November. The states have been “holding the hose” quite successfully despite your “absences” during the bushfires and pandemic. It really is morally and ethically incumbent on you to represent us at the climate conference in Glasgow. Our kids (and yours) depend on Australia joining the world in limiting climate change.
Theo Richter, Bentleigh East

My sister, who is passionate about family history, has found an entry in the records of the Geelong Court of Petty Sessions which informs us that our maternal grandfather, “being parent of [our mother], a child born in Victoria on or about the 11th day of February 1917, did neglect to cause such child to be vaccinated within six months of its birth. Case deferred”.

It was followed by an entry dated April 1918, where our grandfather again attended court to be told the case was withdrawn because the child was now vaccinated. Grandfather was a repeat offender apparently as he was fined 20 shillings in March 1914 for the non-vaccination of our aunt. Vaccination was not optional then and no doubt saved countless lives as it continues to do. We live in interesting but not unique times.
Elida Brereton, Southbank

Re “Students in COVID-19 hotspots wary of return to class” (The Age, 5/10) which quoted a student from Ilim College. The college was not contacted for input into this article. Despite what it suggests, our college has strict COVID-safe measures in place to ensure the safety of our students, staff and community.

Face masks are mandatory. Social distancing and density requirements are implemented. Visitors are strictly limited. Hand sanitiser and sanitary surface wipes are provided in all areas. We have a thorough cleaning and disinfecting program and staff have been trained to manage COVID-19.

Air purifiers have been installed in exam rooms. All staff are being vaccinated and where practical, they work from home. There have been no major COVID-19 outbreaks within our college, and we strongly believe this is due to our proactive approach towards being COVID safe.
Ilim College

Tony Abbott is overseas again, visiting Taiwan “in a private capacity” (The Age, 8/10). Numerous Australians are refused travel exemptions or cannot return home. We are certainly not all in this together.
Geoff Oliver, East Malvern

The need for caution

Victoria should watch very carefully New South Wales’ “opening up” experiment and not follow blindly. It is highly likely that this will result in increased deaths and long COVID cases. With Victoria’s ambulances and hospitals already stretched, and a now plentiful vaccine supply, it should adopt a 90 per cent fully vaccinated target, which can be quickly achieved, to minimise death and suffering.
Brewis Atkinson, Tyabb

The problems we faced

So Scott Morrison says NSW’s opening up on reaching the 70 per cent double dose vaccination target should “be a sign of hope to the rest of the country, particularly those in Victoria” (The Age, 7/10).

Well, Mr Morrison, had we received vaccines at a similar rate to other OECD countries, and had we not had to divert our limited allocation to NSW when it initially mismanaged its lockdown, we in Victoria would not need hope nor your patronising comments.
David Marsden, Glen Iris

Australia once rode on the sheep’s back, manufacturing and mining. Now, judging by the demands for fast exits from lockdowns, our economy is desperately dependent on nightclubs, pubs, restaurants, coffee bars, shops and tourism. A “me” economy?
Kay Moulton, Surrey Hills

Qualities of a true PM

Anthony Albanese is not the most charismatic and inspiring, or aggressive and “cut through”, opposition leader (Letters, 8/10). However, there is a world of difference between a prime minister and opposition leader.

In a prime minister, I am looking for competence more than charisma, honesty more than hubris, policies more than photo opportunities, authenticity more than aggressiveness, action more than announcements, and empathy more than ego.

I want a leader who can inspire ministers and public servants to work together for the betterment of our society and the survival of our planet. I do not know whether Albanese, as prime minister, can do that, but I know that the incumbent cannot.
Graeme Henchel, Yarra Glen

If my hairdresser charges a “first haircut after lockdown” levy, I am sending the bill to Brian Cullum (Letters, 8/10).
Angus McLeod, Cremorne

What could go wrong?

The federal government should solve the states’ health funding crisis by using its own JobKeeper model: give the states all the money they request and then leave it to their own honesty to give back funds if they got too much.
Don Relf, Mentone

The well-off and needy

Regularly The Age reports stories of underfunded hospitals, underpaid nurses, hungry and homeless people, destitute refugees, overcrowded public schools and woeful rural health services. Yet the Money section regularly responds to queries such as “How can I reduce my assets to get a larger age pension?” Apparently you should renovate your kitchen, buy a more expensive house, go on more holidays and/or hand out money to the kids. Then you can take more from the public purse, leaving less for the really needy. The fact that it is legal at all prompts some serious questions about Australia’s value set.
Kairen Harris, Brunswick

Bad luck for the Premier

Hopefully the Frenchship will be restored soon.
Gordon Moss, Brookfield

If the Glasgow summit were moved to Hawaii, our boy would be the first on the plane.
Ian Maddison, Parkdale

Will Kevin Rudd please retire to his beach shack and go surfing and leave us to get on with living.
Jill French, Hervey Bay

Who is paying for Tony Abbott’s unusual trip to Taiwan?
Margaret Ludowyk, Brunswick

The irony. Anti-vaxxers with trendy tattoos rejecting medical science yet untroubled about chemicals being injected into their skin.
Russell Kenery, Red Hill

Anti-vaxxers, if Ebola were rampant here and we had a vaccine for it, would you flip?
David Speirs, Geelong

Rein in the tech giants? Look no further than Beijing. No mucking about there. Common good prevails.
Helena Kilingerova, Vermont

Greg Baum’s first line: “Sport, we have a problem” (7/10). Directly underneath his article: an ad for a betting agency. Duh.
Alan Duncan, Frankston South