A prolific paedophile who posed as a ‘sugar daddy’ stockbroker and forced women and children to send him sexually explicit videos of themselves has been described as ‘one of the worst online sexual predators’ ever seen.

Abdul Elahi, 26, was branded ‘in a league of his own’ at the start of his sentencing at Birmingham Crown Court on Wednesday, after he admitted 158 charges committed against 72 complainants. He is believed to have tried to exploit victims globally in 34 different countries.

The former McDonald’s worker, from Sparkhill, Birmingham, used fake names to target up to 2,000 women and children online, offering them cash to send him back pictures and videos of themselves.

While living under the roof of his parents, he then persuaded his victims to send him more depraved material including humiliating videos of them taking part in abuse with other children and siblings.

He also forced some of his victims to self-mutilate and blackmailed women to send him footage of themselves abusing young children – some as young as eight-months old –  before selling depraved ‘box sets’ of the videos to other paedophiles around the world.

One boy’s father told the court today that his son has written multiple suicide notes and took a knife from the kitchen after being abused on the orders of Elahi. 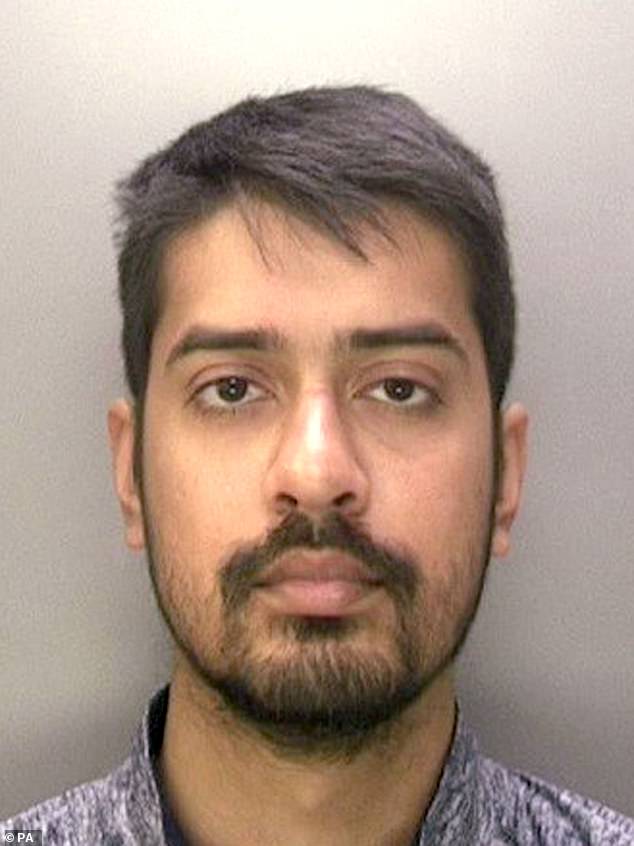 Abdul Elahi (pictured), 26, was branded ‘in a league of his own’ at the start of his sentencing at Birmingham Crown Court on Wednesday, after he admitted 158 charges committed against 72 complainants and is believed to have tried to exploit victims globally in 34 different countries

Meanwhile Kirsty Nicholls, 35, from Middlesex, was also in the dock today after she willingly sexually abused a boy on Elahi’s instructions – and even suggested new forms of abuse for herself to film.

From the sales of his material, Elahi would launder the money through Amazon gift cards and buy electrical goods and sell them on for cash, the court heard.

The court heard today how he was ‘juggling’ many tens of potential victims at any one time.

Elahi was arrested by the National Crime Agency in December 2018 but was released, after which he was able to continue his offending until August 2020, despite being on bail.

Prosecutor Adrian Langdale QC told the court on Wednesday: ‘The whole persona, the whole arrangement, was a sham from the very beginning.

‘He simply, it would appear, saw his victims as a way of making money. Victims were targeted day after day, with no let-up from Mr Elahi.’

The court heard that some women and young girls were blackmailed into abusing a baby or a sibling by Elahi, who had offered to pay off debts with Bitcoin.

Mr Langdale said the offending spanned a three-year period from 2017 to 2019, with many of the offences committed while Elahi was on bail and subject to a sexual risk order.

Elahi also ‘acted as a mentor’ to other online abusers, the court heard, with ‘copy-cat’ offenders targeting some of his victims, the Crown alleges. 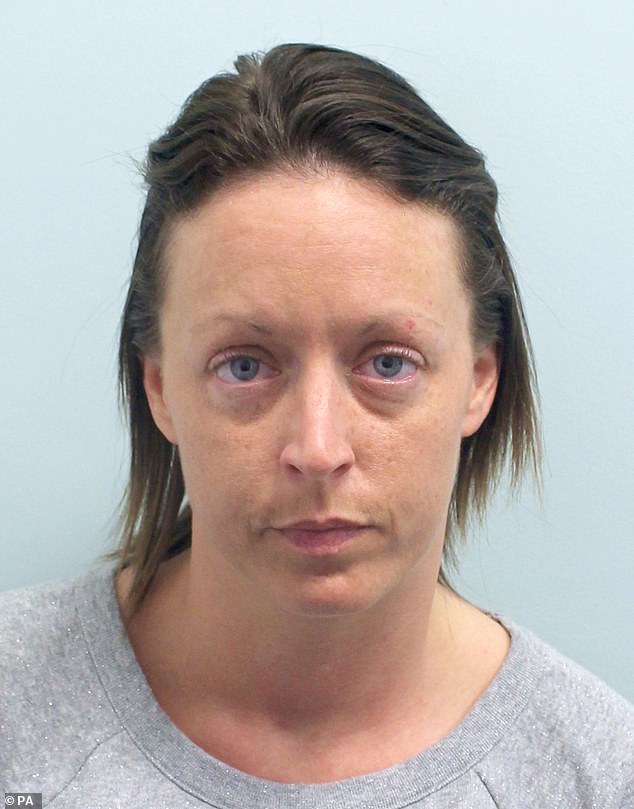 Kirsty Nicholls, 35, from Middlesex, was also in the dock today after she willingly abused a boy on Elahi’s instructions – and even suggested new forms of torture to film herself

Mr Langdale told the court: ‘We maintain that Mr Elahi is an exceptionally dangerous predator.’

The so-called ‘box sets’ of abusive images and videos compiled by Elahi were distributed in vast quantities, the court heard, after girls and young adults were blackmailed into providing humiliating and degrading sexual material.

Around 550 females in Britain are believed to have been targeted by Elahi, with almost 2,000 identified altogether in the UK and US.

Mr Langdale said Elahi had switched online conversations to WhatsApp to cover his tracks, adding: ‘Sixty-seven thousand indecent images of children have been recovered from numerous devices and cloud storage for Elahi.

‘There is evidence that he carefully structured and logged all of his material.

‘He sold that material on with a clear financial motive irrespective of the damage that he was causing by spreading this material.’

Among those targeted on so-called ‘sugar daddy’ websites were financially desperate victims, including mothers at risk of losing their homes or struggling to feed their children.

Of the women making the claims, 14 were underage when the nonconsensual videos were uploaded. Another 14 were victims of convicted sex criminals.

Four of the women are British. They are not named in the document, and are instead called Jane Doe followed by a number.

One of the women, Jane Doe No.2, was a victim of prolific paedophile Adbul Elahi.

Her claims is as follows:

Elahi is being sentenced this week after he admitted 157 offences at Birmingham Crown Court earlier this year.

One of the videos Elahi forced Jane Doe No. 2 to film was shared to Snapchat by a classmate.

Two years later, in December 2020, at least five separate links to videos of Jane Doe No. 2 were still active, the lawsuit stated.

It read: ‘Individuals who viewed her videos reached out to her through social media, denigrating her, and accusing her of posting the content intentionally and requesting additional content.

‘The illegal dissemination of CSAM and ongoing harassment has caused Jane Doe No. 2 to suffer severe anxiety, panic attacks, and body dysmorphia that led to significant weight loss, to a low of just 80 pounds.

‘Jane Doe No. 2 suffered from suicidal thoughts and has attempted suicide on more than one occasion.

‘This anxiety caused her to quit her job and resort to online work that does not necessitate going out in public.’

First asking for photos of women in high heels, he would then ask them for more sexually explicit images and began asking about their personal life and children.

He would then ask the young women if they had children and how old they were, as he had ‘an interest in incest videos’ and wanted to sell them online around the world.

He would then screenshot fake images of him transferring large amounts of money – such as sums of £158,000 – to persuade women to abuse their children on film.

After some of his victims refused to abuse their own children, he threatened to expose previous photos sent to Elahi to family and work colleagues.

Elahi boasted about his jet-set lifestyle and how he used private jets to fly to Los Angeles – in fact, he was living with his parents and working in McDonalds.

Mr Langdale added: ‘He systematically targeted woman online, defrauding them and selling their imagery as boxsets.

‘Many of the adult victims, were just over 18 and were blackmailed and Elahi would become sadistic in his demands.

‘He distributed them in vast quantitates and they have been left scarred and damaged.

‘Elahi was intent on targeting children, he could then film and distribute to other paedophiles.

‘There are some 550 women in the UK, which have been traced by the NCA.

‘Around the world there are victims in Canada, Australia and a total 34 different countries. In total 67,000 indecent images of children have been recovered.

‘He structured all of his material, before trading it in boxsets of abuse.

‘He supplied that material on for financial motive. His level of supply was on a different level. The images were potentially left online indefinitely.

‘He went on to undertake a careful laundering from the proceeds of the crime.

‘Elahi started using sugar daddy websites, presenting himself with a fake name and would include fake photographs of watches and planes.

‘He would describe himself as a stockbroker.

‘At the time of his offending, he was 23-24, and lived in his family home and worked in McDonalds, he attended college and was a loner.

‘He stayed at his family home in front of the internet. He went phishing for young and vulnerable victims.

‘He boasted to his victims that he had Page 3 models working for him. He targeted single mothers so could access any children they had.

‘But Elahi managed to become sloppy and he left a clear pattern of offending.’

Appearing alongside Elahi in the dock was Kirsty Nicholls, 35, who previously pleaded guilty to two charges of sexual assault of a child and one of making an indecent photo.

After Elahi’s arrest in July 2018, officers from the NCA, the FBI, and Australian and New Zealand police found phone messages between the pair.

Elahi requested that Nicholls, of Northolt, Middlesex, abused a young boy, to which she was ‘entirely compliant’ and even made suggestions on how to carry out the abuse.

‘Nicholls was entirely compliant. She even made suggestions as to what to do in the next video.’

One boy’s father read a victim impact statement in court, and said: ‘The pain and anguish is immeasurable, I have had to seek medical help.

‘My son had thought he had done something wrong.

‘He barricades the door, and didn’t want anyone to take his photograph.

‘My son has even written three suicide notes since the abuse and took a knife from the kitchen.’

Elahi admitted a host of charges at previous hearings after a lengthy investigation by the National Crime Agency.

Elahi is expected to be sentenced later this week.